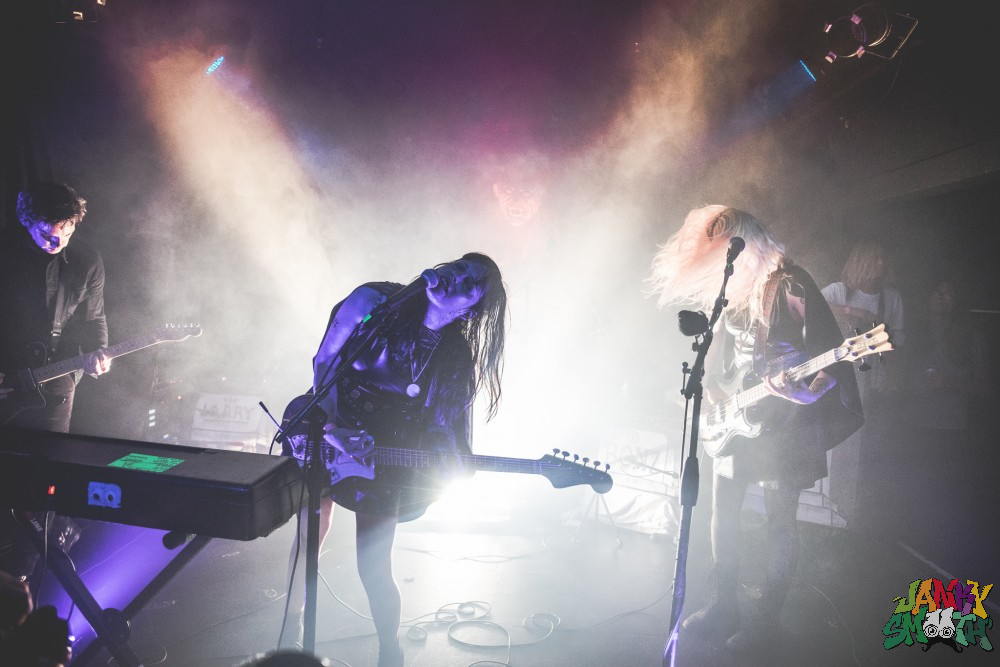 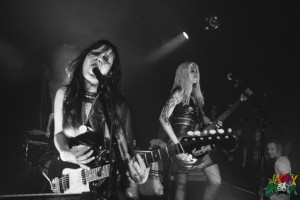 There is something different emerging from the Los Angeles music scene. It’s not nice. Or sweet. Or candy-bar-bubble gum. Or a drunken teenage blackout filled with mild regret. And I like it. Death Valley Girls aren’t like your typical Burger Records band. You can’t simply attach the punk, psychedelic or garage rock label to them and be done with it. They aren’t your standard, soft balled psych rockers seeking some type of enlightenment through their experiments with hallucinogens. They are what happens when the acid turns and the faces around you become deranged and unfriendly; surrounded by deeply troubled individuals slipping further and further away from society with each hit of blotter. Death Valley Girls’ second album, “Glow in the Dark” summons the seventies more than it summons the summer of love. When America was in the midst of an identity crisis, amidst events such as the Nixon resignation, Patty Hearst and Jonestown. And even though the Manson murders occurred in 1969, the events surrounding the high profile slayings in the Hollywood Hills reverberated across the forthcoming decade and dispelled the image of hippies as harmless, peace loving druggies. Trust no one. But singer/songwriter Bonnie Bloomgarden insists that, “you can do it without murder” and that sums up the Death Valley Girls doctrine. 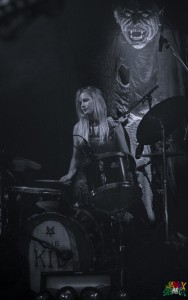 The Kid shot by Josh Allen

I walked into The Echo this past Thursday night for the Death Valley Girls record release party for Glow in the Dark. I looked up at the stage and a smile cracked at the side of my mouth as I saw the larger than life, red demon adorning the stage as a backdrop for the band and a packed, sold out house bursting in anticipation. Over the past few months I’ve been watching as Death Valley Girls evolve away from the flowery bubble gum that has been common place in the scene and into more of a true reflection of the storm that brews in the soul of Death Valley Girls visionary, Bonnie Bloomgarden and indeed, the storm brewing in the world. Janky Smooth has spent the last few months getting to know Bloomgarden a bit better through interviews and chance encounters and right from the outset, it was easy to tell that she wasn’t like the rest of the kids in this scene. You know when you meet someone and you can just tell that they own a set of vintage tarot cards? You can tell when someone is just a tourist in counter culture or even the occult and when they’re truly, “about that life”. 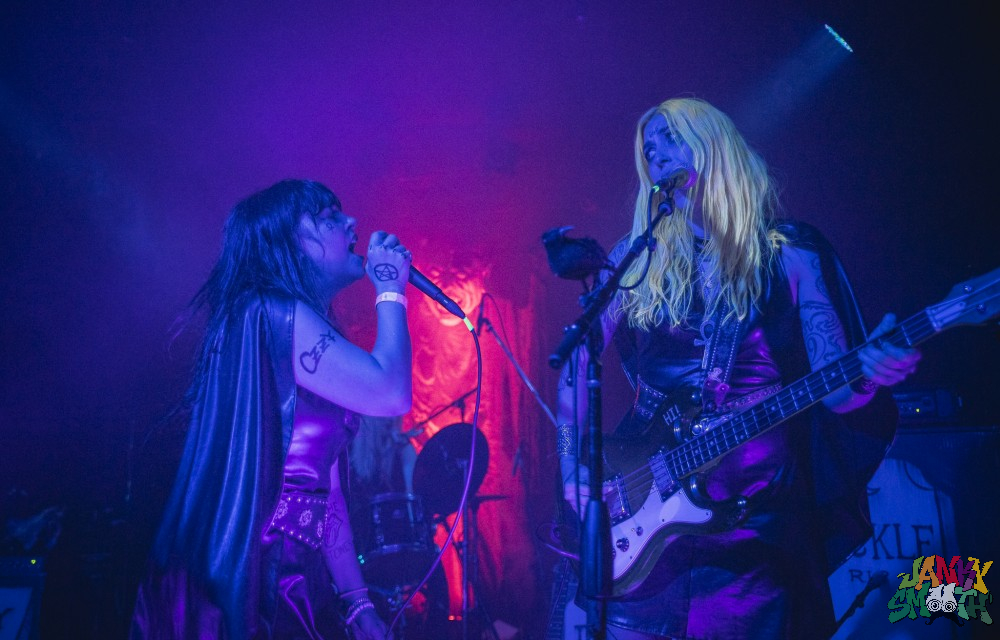 Death Valley Girls’ music has often been described simply as “punk” but I hear more Kiss, Sabbath and Joan Jett than I do Sex Pistols, L7 or the The Dead Boys. More of a cool, elusive outlaw rock than a blatant and clumsy fire set on the steps of the capital. Their music is filled with Metaphors and musicality that are reserved for a more skilled and nurtured artist than the simplistic and literal medium of “The People”; raising up rock stars rather than killing your idols. You get the picture. God knows I love the DIY and independent spirit of punk rock but the recent rise of the accidentally formulaic music that is floating around the independent music scene has slowed down the ballistic momentum of creativity in an environment that is ALMOST completely devoid of corporate influence; which should remove the need for artistic limitations and assimilation but hasn’t. 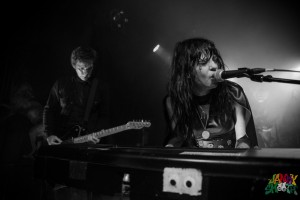 Bonnie and Larry of Death Valley Girls by Josh Allen

Glow in the Dark is one of my favorite releases of 2016, thus far. And as serious as I make the music sound, there are still tracks that don’t take themselves too seriously such as “Disco” and “Summertime”. But my favorite tracks on the record are songs like “Horror Movie”, which is a commentary on the state of our society through the looking glass of TV and the disturbing images and ideas which have become common place in American society. It’s anthemic chorus and blues rock riff ride the 4 on the floor kick drum into that place in your mind in which songs get stuck forever. “I’m A Man Too” makes my masculine feminism reach a fever pitch as “babes” go “bro” to blur the lines of the patriarchy and our societal roles through a sparse set of drum, bass and guitar hits. Those hits exist between the chorus of determined, female, group, sing along type vocal. But the opening, title track of this album might be my favorite with it’s steady building chord progression that reaches it’s crescendo as the words Glow in the Dark are delivered repeatedly at it’s climax. 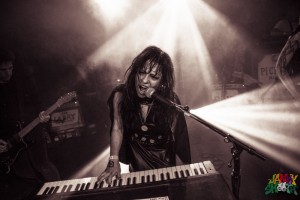 Moments before the band took the stage, artificial smoke started to fill the room at Death Valley Girls’ record release party at The Echo on Thursday night. Beams of light shot up from the floor of the stage and smoke dulled the bright incandescence as Charlie Manson’s “Always is Always Forever” rang out in an eerie foreshadowing of the Death Valley Girls cult we were all about to join. Pickle, The Kid, Larry and Bonnie took the stage in their leather anti-hero uni’s, with images of capes and neon blonde hair illuminated by black light. The loop of the chanting Manson girls gave way to the opening bars of Glow in the Dark and the phased out, delay rich chords that make up the opening moments of the new album’s title track. The glowing red demon behind the band sneered at all the teeny boppers who weren’t used to this much concentrated evil incorporated into the acts of the indie bands they love. It served as fair warning for the growing complexity of the Death Valley Girls live performance. There was a real Alice Cooper/Kiss element in the movements and imagery and this performance marked a departure from the minimalism of your typical garage band live show.

The band plowed through the tracks on Glow in the Dark and played a select number of songs from their debut album, Street Venom but the evolution of the band from their debut effort to present day is massive. Not so much in the music itself but in it’s presentation and the seeming confidence boiling over in eyes and body language of Bonnie Bloomgarden.

“If you mess with Minivan, we’ll chop your balls off!”, exclaims Bloomgarden in her mousy but menacing voice as she addresses the beating their band photographer for the past few weeks, David “Minivan Photography” Evanko was taking near the pit. 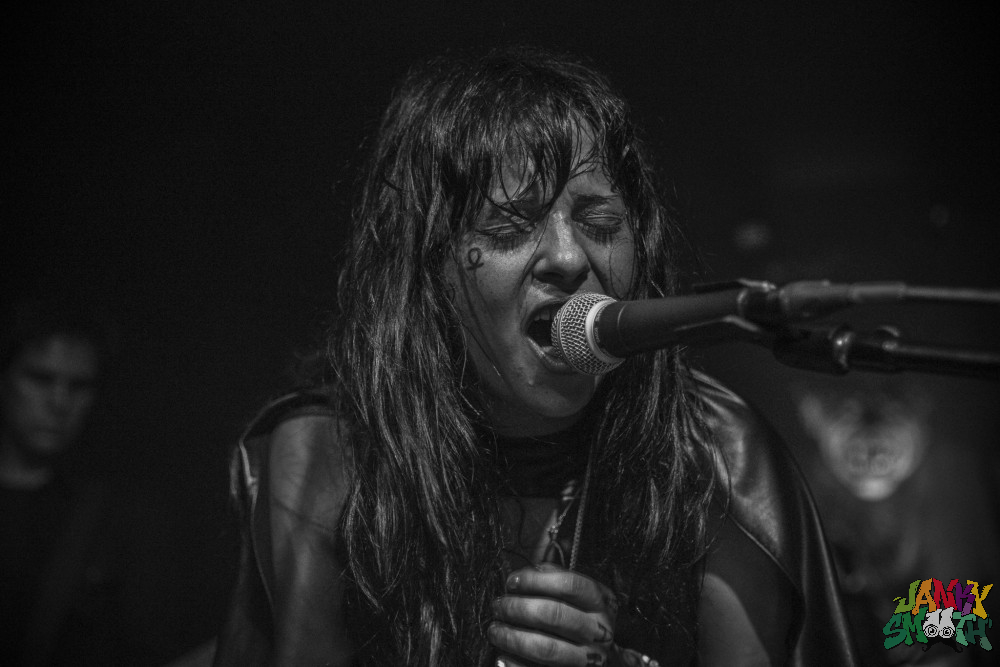 Bonnie and bassist Nicole Smith, aka Pickle have found a rhythm with each other on stage as they seemingly and frequently tease us with what can only be described as a half scissor. Other times, Bloomgarden will lay flat on the floor of the stage with her guitar as Smith hovers over her. They flash each other a bit of a wry smile and wholly ironic look, as if they are constantly reading some type of inside joke in each other’s eyes. Guitarist, Larry Schemel is the quintessential axe man. His contribution is undeniable, if not in stage presence but instead with pure guitar tone and tasty riffs and leads. The Kid, aka Laura Kelsey pounds her kit with power, flavor and meter and will undoubtedly be subjected to the common and patronizing compliment of being called one of best female drummers in rock; that is if the band keeps on it’s current course without any premature visits to rehab or other such institutions, too prematurely. The aesthetics of the two Amazonian blondes juxtaposed against the sometimes powerfully bashful brunette, Bloomgarden doesn’t hurt the sometimes unfair prerequisite of glamour associated with successful female rockers. Death Valley Girls have an arsenal of weapons at their disposal to leverage the attention of an easily distracted generation that is facilitating their rise. It’s hard to take your eyes off of them during their set and it should lead to a decrease of eyes on cell phone screens, at the very least.

Death Valley Girls represent a much needed shift away from the drunken innocence that often encapsulates a scene that is coming of age during an increasingly volatile time on this planet. Their music, presence and subject matter might make you think, even if you are just looking to escape. And hasn’t it been rock and roll that accepted the responsibility of shaking entire generations awake in the past? I see Death Valley Girls being capable of wrestling attention away from the Kardashians and onto the dark lord that nourishes their popularity; Satan. They can shine the light onto the hand of Lucifer and expose his many works in this world; with Ouija, wand or magic, music spells.