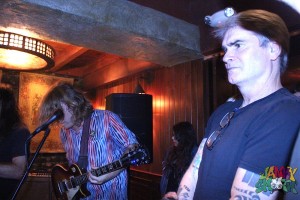 What the fuck, Ty Segall?  When do you sleep?  Ty Segall unveiled his new band on Tuesday night at The Silverlake Lounge during a secret, warm up show.  There has been much anticipation and excitement around the new “The Muggers” moniker attached to his name on the upcoming tour schedule.  It was revealed Tuesday that along with regular bassist, Mikal Cronin, there will be a few other familiar faces on stage with Ty Segall on his upcoming tour.

Emmet Kelly of The Cairo Gang on lead guitar, Wand singer Cory Hanson on Keyboard, Evan Burrows of Wand on Drums, and Kyle Thomas of King Tuff on second guitar.

This will be the band touring with Ty Segall during the upcoming tour supporting the new “Emotional Mugger” album that is dropping January 22nd.

Janky Smooth is giving away two tickets to each night of sold out shows at The Teragram Ballroom on January 15th and 16th.

Share or Retweet our Ty Segall and The Muggers Ticket Giveaway Posts.

Leave a comment on this post telling us what your favorite Ty Segall album is and why.

Winners will be selected on Thursday Jan 14th at 10am.