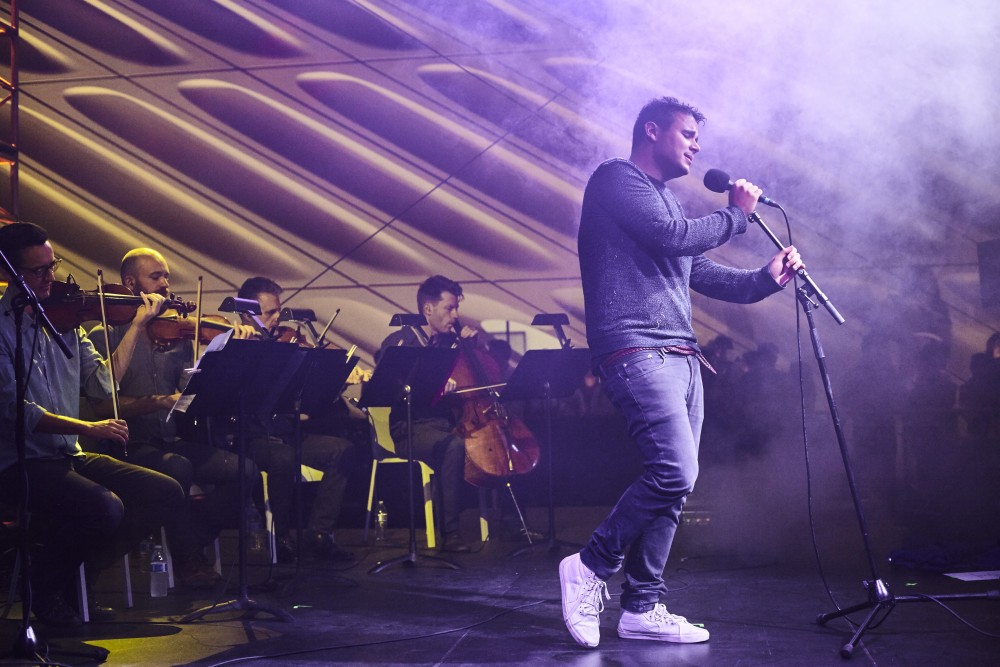 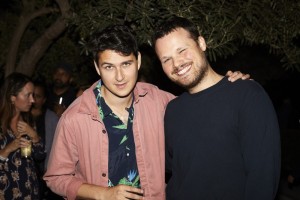 Last week, I got an email from a publicist named Jonathan who invited Janky Smooth to come cover the third installment of Non Object(ive), Summer Happenings event at The Broad Museum in Downtown Los Angeles. I became pretty excited. Not because of the lineup of DJ’s and performers that were scheduled to perform such as Vampire Weekend’s, Rostam or Sparkle Division but because I have yet to experience The Broad Museum since it opened in September 2015. Yes, begin your culture shaming now.

It’s not as if you need media credentials to view The Broad’s permanent collection of postwar and contemporary art but you do need to make reservations that are backed up by 2 months and also, pay extra to view the Cindy Sherman exhibit, attend the Summer Happenings show and have access to all areas of the museum. So covering some music I only had a mild interest in wasn’t a big price to pay to walk all areas of The Broad. Last month, Summer Happenings featured a reading by Richard Hell and a dark wave DJ set by Sky Ferreira so I was more than a bit interested to see the scene that was developing amongst the attendees of this cultural thrust in L.A.  I scooped up the fam and scooted downtown to the very upper crust of the performing arts in Los Angeles; Grand Avenue. Situated next to The Disney Concert Hall, The Broad’s benefactors, Eli and Edythe Broad, part philanthropists and part Oligarchs, had also been instrumental in securing the $50 million deposit that built the Frank Gehry designed concert hall next door as a component of the “Grand Avenue Project” that The Broad Museum is a part of.  When I think of the development of Downtown L.A. over the past 16 years, I imagine murders, suffering and deals gone bad– and I’m not referring to the Skid Row culture of migrant workers and broke artists that made up the crack and heroin economy that dominated downtown until AEG began building Staples Center in 1998. No, I’m referring to what I imagine moved the progress such as greased politicians, crushed unions and displaced families to tap into the billions of dollars that a revitalized Downtown L.A. would bring into the coffers of the city of L.A. and the it’s most wealthy citizens. The city paying businesses and people in the form of tax subsidies to make monuments to themselves and of course, make obscene amounts of money. Think Ray Donovan season 3 or any season of House of Cards. Now, almost 2 decades after the revitalization project began, Downtown Los Angeles is a sparkling jewel of city life that managed to squeeze all the homeless and their tents and cardboard boxes into just a few square blocks that surround the various missions and shelters of Skid Row. Now, Eli Broad has his name attached to the most exciting new museum in town, as well as a notable role in launching MOCA and revitalizing LACMA.

Yeah, I know, I sound like some pseudo, cynical Debbie Downer and it would be just as easy to to skip all the political and social commentary and focus on the material beauty of the architecture, the priceless works of art and world class musicians that are hosted inside those Grand Ave structures but I like to tell the whole story; to many a publicists dismay. In all seriousness, it would be difficult to find an elite and wealthy individual like Eli Broad anywhere on this planet that has the kind of love for their city that Broad has for Los Angeles.

Anwho. We drove up to The Broad going west bound on 2nd street. Approaching Grand Ave, it is difficult not to be in awe of the futuristic honeycomb-esque design and aesthetic of the side by side, architectural landmarks of both The Broad and The Disney Music Hall. As we emerged from the parking elevators, we arrived at “The Plaza” courtyard that is located just outside the confines of The Broad. There was a great mix of young and old, square and sexy and characters from across all parts of L.A’s sprawling and diverse landscape. The bar was buzzing with activity but there wasn’t an obscene amount of people discouraging the mildly thirsty from tolerating a long wait. The western side of the plaza featured a festival grade side stage with all the bells and whistles of lights and digital screens mounted across the booms and frames of the structure. We were a bit late so Sparkle Horse had just finished their set and we decided that the works of art contained within the textured and dimpled square structure were our priority.

We found out as we were entering The Broad that the infinity room of lights and mirrors was closed, goddamnit, so, we went straight up to the 3rd floor to check out the permanent collection and the Cindy Sherman exhibit: Imitation of Life. 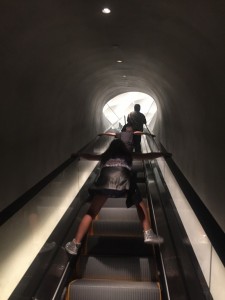 We took an extended escalator ride from the ground floor to the third floor. The conveyer belt of steel steps took us into a tube of plaster that looked like smooth, gray and clay wormhole. As we passed through and reached the end of the ride, a mammoth white room with 100 foot high ceilings was revealed. You could see that the floor was divided into different compartmentalized rooms of exhibits. This main room contained the art of Takashi Murakami, with the most prominent piece, “In The Land of the Dead, Stepping On The Tail of a Rainbow” taking up almost two complete panels of wall, connecting at a right angle. Without getting into every piece I obsessed on that night, I will just say that this massive acrylic on canvas looked like an oversized celluloid animation containing diverse imagery of skulls, dragons, samurai and peacock and reflected the mania and chaos of the 2011 quake and tsunami in Japan. Murakami had multiple pieces in this first room and the detail of each was just as impressive but the sheer size and detail of this piece left an unforgettable impression. 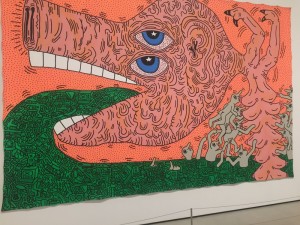 I couldn’t help but think how perfect it was that a group of Warhol’s, Basquiat’s and Haring’s hung from the walls, transplants as a part of the Broad’s permanent collection. No one has been more imitated by artists working commercially in Los Angeles than Andy Warhol and his hanging Campbell Soup cans have been an inspiration for so many, not just in L.A. but particularly so here with the focus of pop culture in art and- is the concept of 15 minutes of fame evident more anywhere in the world than the city of angels? Lichtenstein paintings, sculptures by Koon and the striking, almost 2 and a half dimensional photography of Andreas Gursky, to name just a few felt like the perfectly curated aesthetic of contemporary art for the city of Los Angeles. We moved into The Broad Museum’s first ever featured exhibit; Cindy Sherman; Imitation of Life. To see the chronology of Sherman’s work and the evolution of her very distinct photographic medium was truly remarkable. From her early rear projection series that uses backdrops to transport Sherman, who was director, photographer, model and make up artist into different worlds and scenes, even though she was just by herself in her studio, to the more abstract and dark work of the latter part of her career that used body parts ordered from medical educational catalogs incorporated into the anatomical landscapes of her photos. My daughter had to close her eyes as she passed through the critically acclaimed, “Clown Series” period of Sherman’s career. I stopped and absorbed the brilliance of the social commentary. Walking through the multiple rooms in which her work hung, I couldn’t help but think of the phrase “maturing as an artist” in a positive way for the first time ever. Because in youth, most are truly concerned with what their outsides reflect and as we age, understanding the darkness and solitude of our inner consciousness becomes a driving force. And that’s how I interpreted Sherman’s life’s work through the big chunk of it that hung from the walls of The Broad Museum.

After we had consumed every single work of art that was hung or mounted on the third floor of The Broad Museum, we walked through the back end stairs to descend into the lower floors of The Broad. The unique features of the new museum continued to reveal themselves, such as the massive “storage closet” that housed the works of art that weren’t currently hanging in the museum. The way that even the museum’s closet acts as a permanent exhibit of the architecture and concept of design of Diller Scofidio +Renfro and Gensler, punctuates the innovation in the construction and design.

As we descended further, we came by one of the rooms that was hosting musical acts and caught a piece of the curious performance of Macy Rodman. Using multi-media of video, backing track and vocals, it was difficult to understand what Rodman was trying to achieve but in all fairness, we didn’t stick around long enough to attempt to grasp the purpose of Rodman’s flat vocal performance. Instead, we posted up in the Plaza and waited for Rostam to take the stage and satisfy the Saturday night party crowd that littered the lawn of the plaza. 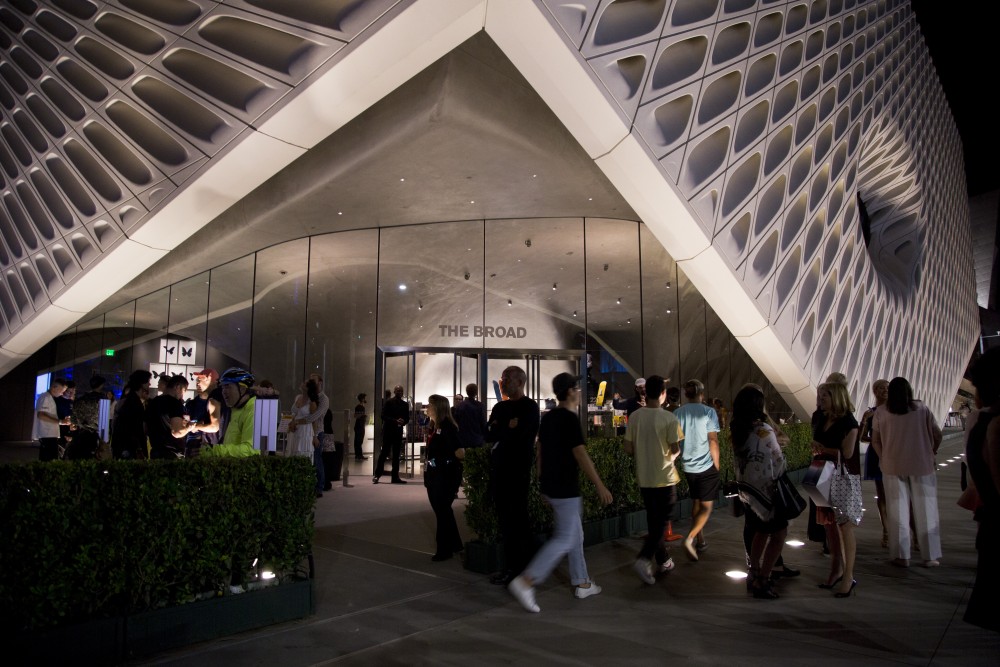 The Broad Plaza by Priscilla Mars

It was a beautiful night for all. Whether you were in a pack of friends and lovers or attending the event with your young family like I was, the Summer Happenings event at The Broad is the type of event that is appropriate for partiers and parents alike. Especially parents who party. The lovely and poignant performance of original songs by the former but formidable contributor to the band, Vampire Weekend, Rostam and his live show was a perfect fit for a beautiful Saturday night at The Broad Museum.