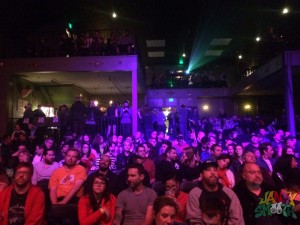 For decades, the music industry has found ways to exploit and capitalize on homegrown music scenes. Organic movements of pubescent and pre pubescent children, finding their voice and by proxy, the voice of the other kids in their neighborhood. Whether it was grunge in Seattle, hip hop in Brooklyn or punk in Orange County, the music industry sees a devoted legion of rabid consumption and immediately moves to find a way to make money from it. It seems like corporations have never failed to corrupt the purity of art except for one exception; Dischord Records in Washington D.C. Last night I went to the L.A. premiere of Salad Days: The D.C. Punk Revolution at The Regent Theater and I learned so much about one of the most influential, uncorrupt able, DIY music scenes that has ever existed.

Salad Days is most definitely a chronicle and an ode to Dischord Records. There was very little in this movie about the Bad Brains outside of the acknowledgment that they influenced the entire scene. The movie was complete enough to mention other bands that influenced the region like The Cramps, The Clash and The Ramones and even a decent amount of time spent on talking about other cultural scenes that were happening in D.C. at the time like Go-Go but director, Scott Crawford was successful in documenting the past and present of the iconic record label.

It wasn’t the already well-documented story of one of my favorite bands, Minor Threat that I found most interesting. Although it was extremely provocative to hear anecdotes from the likes of Thurston Moore on the straight edge scene and how everything changed after most of these 14, 15 and 16 year old boys got laid for the first time, what was most interesting was to learn the steps, bands and events like Revolution Summer that cleared out all the machismo and moved the D.C. scene into a politically aware hot bed of ideas that was inclusive of everyone. The interviews of Dischord Records founders Ian MacKaye and Jeff Nelson were like separate, private conversations among friends of the two men venting about each other. When Nelson discussed how he was never down with the “Don’t drink, don’t smoke, don’t fuck” philosophy and how divisive it was, it took me back to dealing with all the uptight straight edge kids I knew and a greater understanding of exactly why there was so much violence in that scene all across the country. When straight edge machismo transformed to political activism, the same sentiments were found towards that philosophy. There was an all or nothing type of dedication that determined how close you would be to the inner Dischord circle. Ian MacKaye’s militancy to independence is to be respected amongst fans. His resolute dedication to his own philosophy and the ideas that sprouted from it made the D.C. scene a model of anti conformity but the intimacy of the movie showed how it strained relationships and left many people and bands on the outside of the bubble.

The coverage, interviews, archival video and photography of the people in the scene and bands like Minor Threat, Teen Idles, Government Issue, Void, Beefeater, S.O.A., Henry Rollins, Ian, Jeff Nelson, John Staab and Brian Baker were mesmerizing. The footage of Baker talking about “emo core” was hilarious and insightful. The early footage of Fugazi’s first shows gave me chills. The Regent Theater seemed to be packed with D.C. transplants. Walking into the venue, it felt like being at the arrival gate at the airport. There was genuine joy in peoples eyes as they greeted old friends with two handed hand shakes, extended hugs and murmurs, giggles and gasps as archival photo’s and video flashed across the screen. You could hear whispers of, “Oh my god. Look at Kenny. He was so young”.  Most of the participants in the evening were a part of the post, “Revolution Summer” bands, fans and  documenters of Dischord Records.  There was a panel of individuals and a QA of some of those that ran the early Zines and members of bands like Swiz.  The introduction to the movie was done by Keith Morris, which seemed a bit odd to me that it wasn’t Henry Rollins or someone who was actually there. All Morris could do was say how much he loved the 9:30 club and clown everyone in the room about the front row of seats being completely empty. Salad Days: The D.C. Punk Revolution is everything you ever wanted to know about the time, the place and the people that influenced so many young kids around the world to go their own direction. 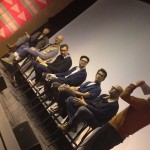 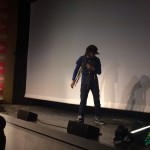 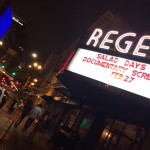 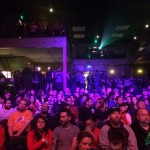