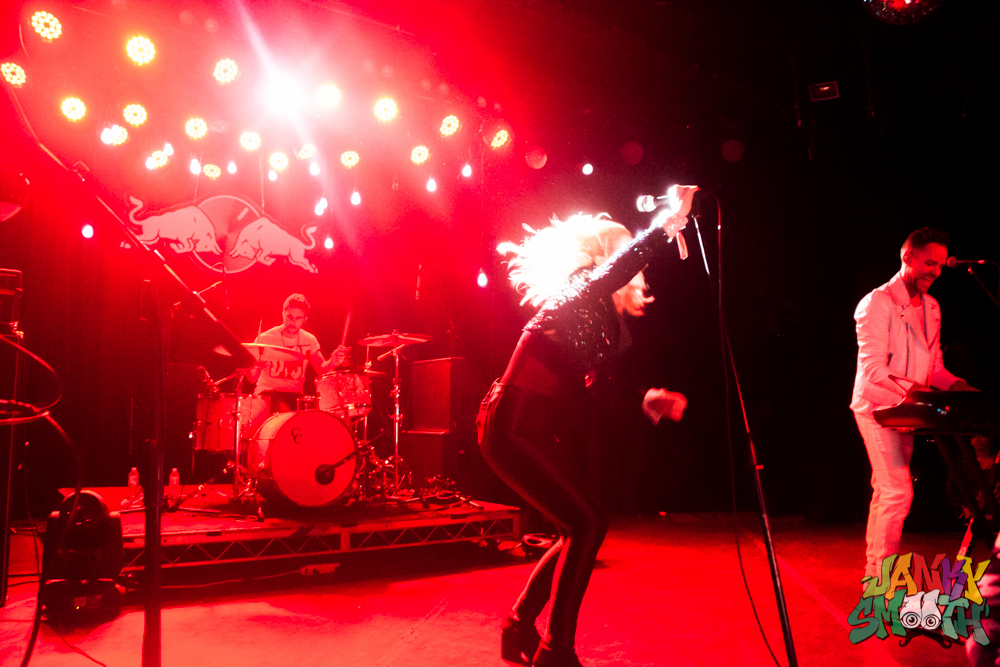 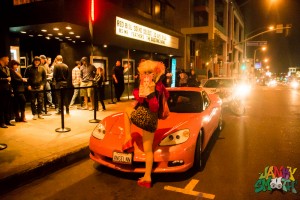 Sunday, November 2nd was night 2 of Red Bull Sound Select’s, 30 days in LA. The venue was the Roxy on Sunset and the line up featured headliner, Ms Mr and Redbull bands, Feathers and The Electric Sons. On Saturday Red Bull treated attendees to tacos and on Sunday, they provided pizza to make sure we weren’t drinking on an empty stomach. There was also a temporary hair dye station set up where the VIP guests usually kick it. Going to Red Bull Sound Select events is like hanging at your best friends pad who has the cool mom that lets you smoke pot in the house. 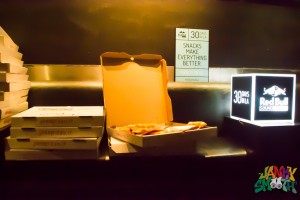 The challenge that Red Bull bands have during these 30 Days In LA is turning on new fans to their up and coming bands, fans who probably just came to see the headliner. This is not a unique plight for opening acts but I’ve noticed that these people are a bit of a tougher audience for whatever reason. As Janky Smooth attempts to cover all 30 days, the bands that step up and move the crowd will be a sub-plot that we follow very closely. After all, Red Bull is taking on this massive undertaking to gain exposure for the bands on their label and Red Bull Sound Select, so using this metric is a good indicator of any future success for these acts. Theoretically.

The show opened with Atlanta, Georgia electro, indy band, The Electric Sons. They put on an exceptional performance. Lead singer and guitarist, Andrew Miller and keyboardist and vocalist, Ben Richards were in perfect vocal harmony. Miller and Richards are excellent showmen. Miller had an instant connection with the audience who responded very well to both him and their music. They have a smooth, danceable sound that can fit well in both a party atmosphere and also, just chillin at the house or in the car. Their drummer, Leon Kittrell is a true master of percussion. It’s difficult to put a lot of flare and swagger when playing to a click track but Kittrell goes well beyond the limits of what is reasonable on a drum kit. Dude is an insane drummer. 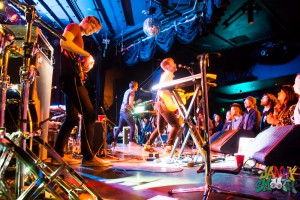 The next opener was Feathers from Austin Texas. Feathers is the brainchild of singer/songwriter, Anastasia Dimou. I love her music. It’s reminiscent of that analog 80’s movie soundtrack vibe that I’ve been hearing around lately but nowhere near as cheesy. There is great depth to her lyrics and her arrangements are dynamic. Her and her band took the stage after The Electric Sons but for some reason, she did not connect with audience as well as they did. There is a much more brooding vibe to her music and the stage lights were pretty dark during their entire set so maybe friendly banter would be outside the character of her music. Also, it was not a brooding type crowd so maybe only other brooders would connect enough to wildly applaud that touch of darkness. One of the highlights of their set was a song called “Land of The Innocent”, which reminded me of a female fronted, Depeche Mode song.   I see great things in the future of Feathers and it’s the type of band I would try to see every time they came into town. 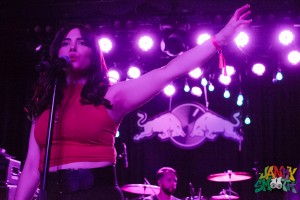 I had never seen Ms Mr live before. I was honestly most excited to see Feathers. I liked their music fine enough but until my experience with Ms Mr last night, I wouldn’t have gone out of my way to go see them live. That changed very quickly after Ms Mr broke out into their first song. Lizzy Plapinger has “it”. “It” goes beyond her incredibly powerful and pitch perfect vocals. “It” is that intangible commodity that won’t allow you to take your eyes off a performer. “It” wasn’t just her tight pants and sexy movements. “It” is a chemical reaction to being in the presence of someone who has “it”. She and Max Hershenow have an incredible chemistry and that comes off both on stage and in their songwriting. One of the highlights of their set was a pretty spectacular cover of Arctic Monkeys, “Do I Wanna Know?”. I typically have mixed feelings about an artist covering a song that is less than 2 years old but I gave it a pass for flawless execution. 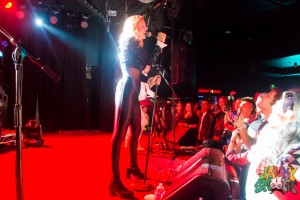 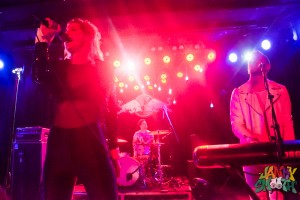