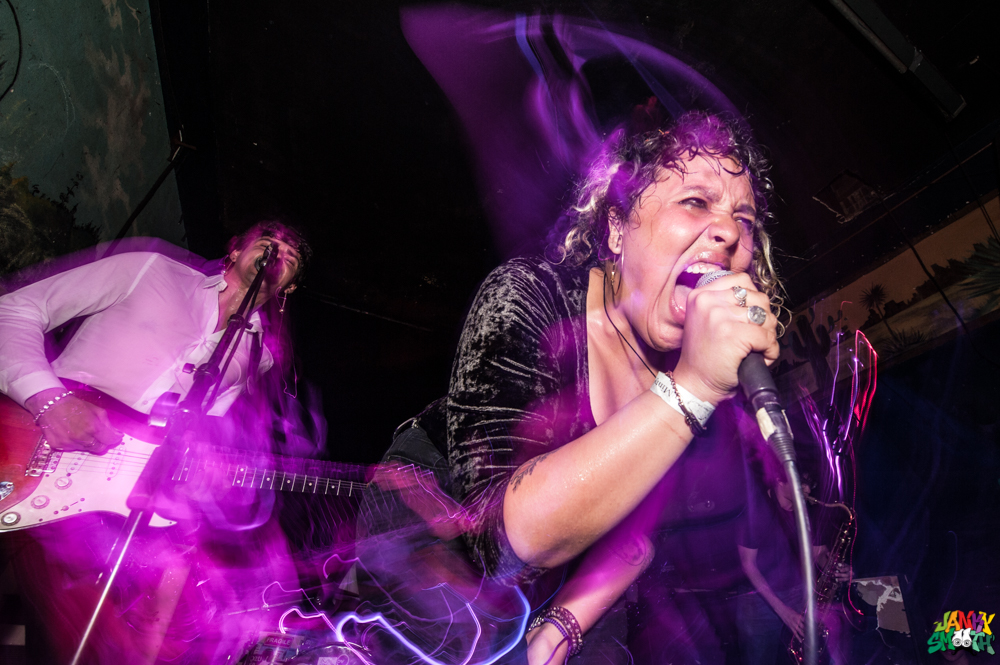 My love for punk saxophone brought me to downtown Los Angeles on April 18th to see the mighty Downtown Boys pack The Smell. I had heard about the band from the same Rolling Stone article so many seem to have read that claimed this band was something special in a sudden sea of punk and having experienced their show, I find myself agreeing. Coming from the East Coast, Downtown Boys are a rarity to catch on this side of the country but as fate would have it, Coachella brought them out to punk-up that bland-ass lineup and pop the brand-new Sonora tent’s cherry. 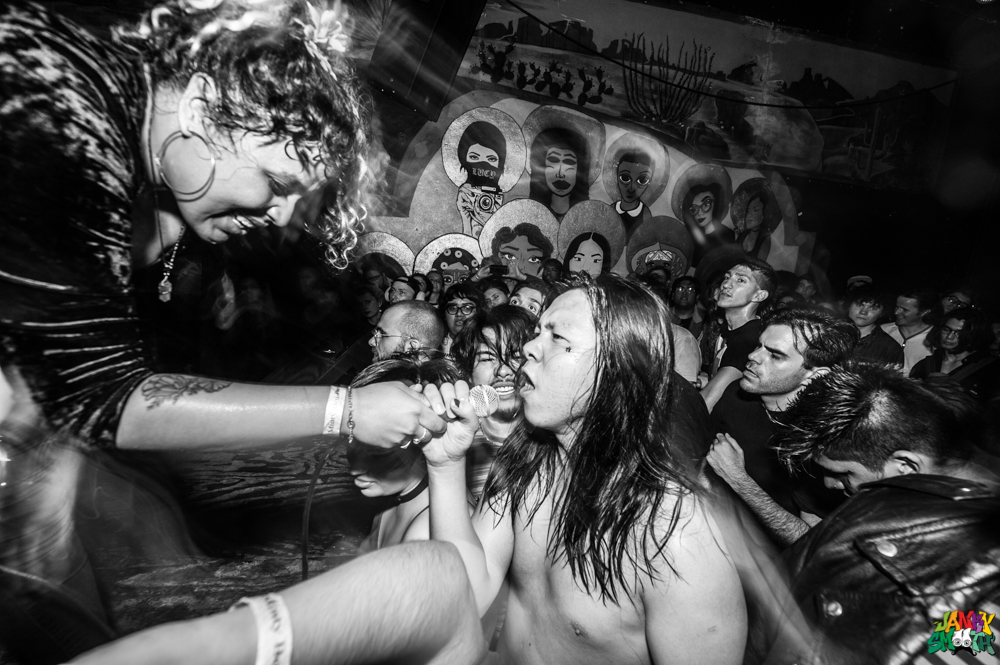 Downtown Boys giving young people a voice  at The Smell 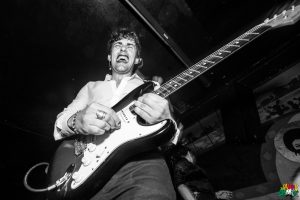 Downtown Boys are a political punk band of twenty somethings that embody all the good and bad things about the millennial generation. Hailing from Providence Rhode Island, the band started out of the collaboration between Victoria Ruiz and Joey La Neve DeFrancesco from What Cheer? Brigade.

becoming the core ideology of the “new left”, making the Smell the perfect venue to host the band.

Downtown Boys’ LP is named Full Communism, as if Slavoj Zizek himself had a writing credit. They even appeared on Democracy Now! to be interviewed by the foxiest progressive I know, Amy Goodman. The band sings songs in both Spanish and English on topics such as police brutality, slavery, mass incarceration and most pronounced on this evening WHITE SUPREMACY.

Ironically, the concert fell on the same night as the Trump Presidency’s first deportation of a “Dreamer”- an undocumented immigrant with protected status. That man’s name was Juan Manuel Montes.

The Smell is a progressive/socialist microcosm in the form of a music venue. Everyone gets to mark their signature on the Smell’s interior and you quickly understand it’s a safe haven for every marginalized class (black, brown, LGBTQ) and fat people (like me). 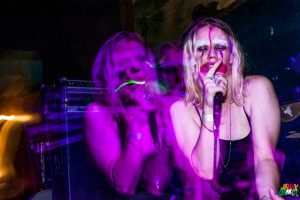 The Downtown Boys are one of a few bands that are outspoken about their intentions of using their music as a vehicle to dissolve white supremacy. The band’s music and diverse lineup already dissolved the conventional expectation of what you think a punk band should look and sound like in 2017. Perhaps “dissolved” is too light a word, these shows are so frenzied that “demolished” seems more apt. 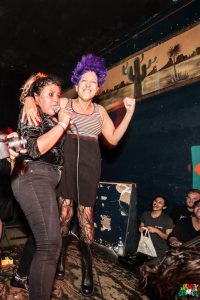 The band challenges and riles up audiences until converting one fan at a time to join their resistance. Between songs, Victoria Ruiz preached about how Trump’s victory is nothing new to those who have been oppressed by white supremacy; nothing new- just another battle. She also told us to reject anything that makes you feel like you’re not enough because the idea of “enough” is invented.

You could physically feel the power of those words resonate into the crowd of misfits that gathered to see the band. With another jab at white privilege, Ruiz mentioned that there is room enough at the table for everyone to be represented or, Tabula Rasa– a clean slate.  Because The Downtown Boys want a new table altogether and they see their music as the wave that could wash away dated institutions.

Ruiz clarified though; for the white people in the audience, like myself, sticking out like a giant-sore-ivory-thumb, standing right in front of her; that white supremacy was not about attacking individuals but rather, a system. A system that I involuntarily propagate with every Ashkenazi breath, I worry.

So here I am- a tall white dude in the very front of the show as the singer shouts “Fuck you tall boys”, the main lyric off the song “Tall Boys”. 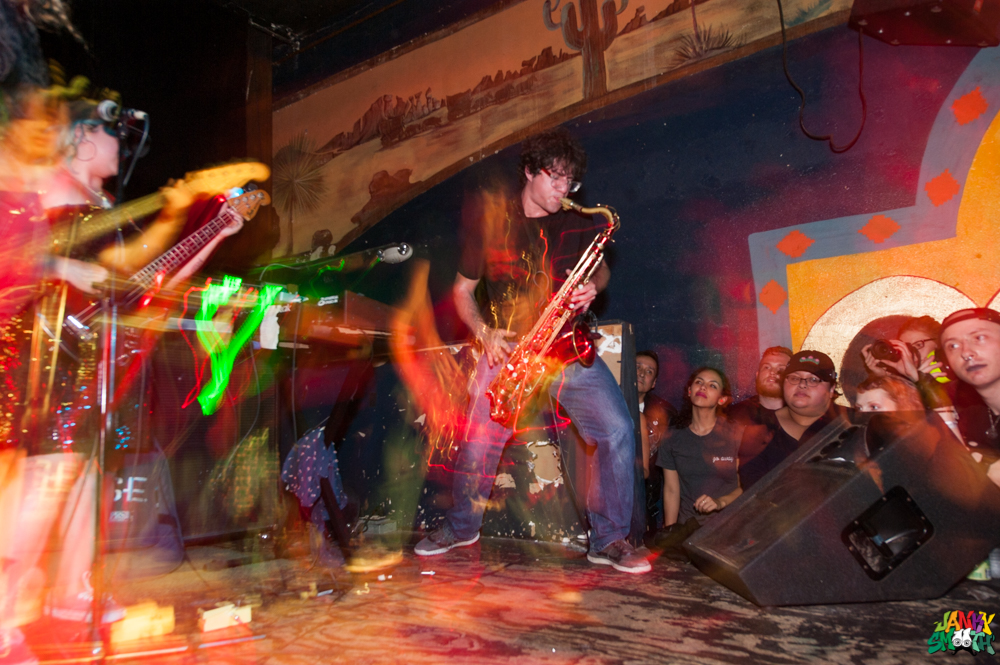 Downtown Boys at The Smell 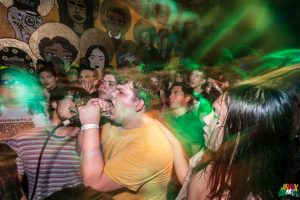 The voice of The Smell in Los Angeles

Had I known this song existed, I might’ve parked my ass in the back. This is the only song I know of that verbalizes the displeasure I’m sure hundreds of people have felt when I stand in front of them at a show. Is that not the most passive aggressive thing you’ve ever heard? I was close enough for the band to tell me to get the fuck out if they wanted (I guess bitching about passive-aggressiveness in a review is pretty bad too though, huh?)

Fuck it, I kinda wish someone told me to get to the fucking back, now.

Trust me, you don’t want to be tall and white at a Downtown Boys concert. If I wasn’t fat I would’ve felt like such an asshole….

…did I mention they did a Spanish cover of “Back on the Chain Gang”? It was amazing! I fucking love The Pretenders!

I think so many politically and socially conscious music fans like myself have been holding our collective breath for a message of depth and weight to emerge from the tide pool of independent music.  With such a fertile environment that is virtually free of corporate influence, it’s a wonder that so few have been brave enough to defy their publicists and management in an effort to galvanize and organize the meandering misanthropes of the independent music scene.

So to say that I have been a bit enthusiastic of the fact that the Downtown Boys have established themselves as a voice of dissent in a scene living in a Burger-Lolipop bubble gum wrapper paradigm would be a bit of an understatement- but are Downtown Boys the “real deal” or is their militancy just another brand? 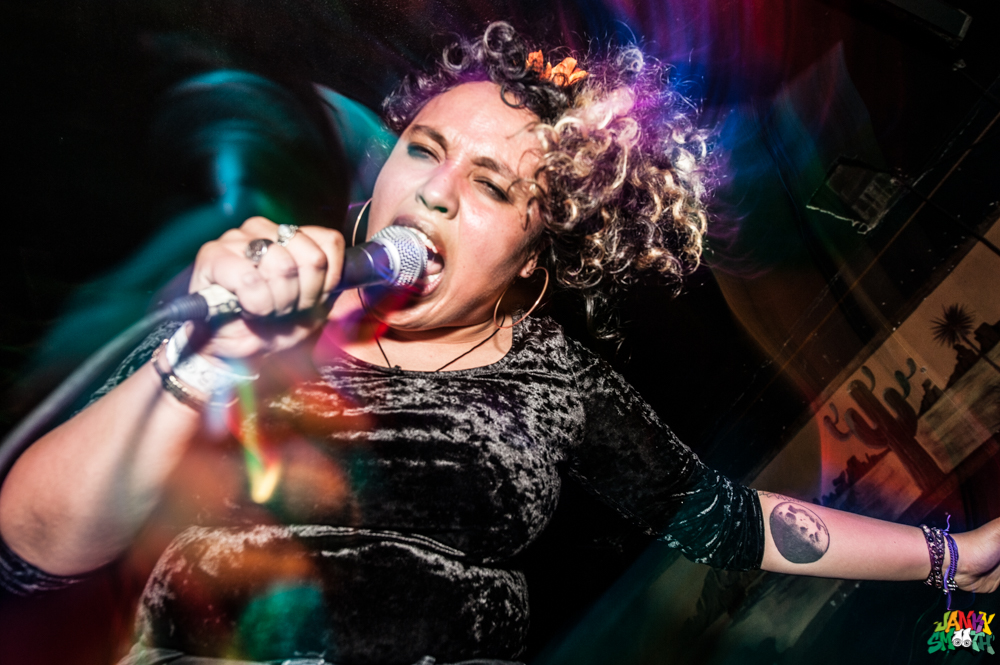 This show at The Smell was sandwiched in between the two weekends of Coachella.  Today, the Downtown Boys wrote an open letter shitting on AEG’s owner for being anti-gay and donated part of their pay to LGBTQ causes.

Remember before the internet when rebels had to be daring and make authentic opportunities to speak out against evil? If the band wanted to play the fest and still say fuck AEG, maybe they should’ve taken their stand on stage, I’m sure that would’ve given them more hits. And if that wasn’t possible then why play at all? Writing a letter that says fuck this festival after playing the festival twice just reeks of the opportunism that is underlying in any artist’s progressive message. You take a stand you get views, hits, likes and plenty of people won’t see through it.  It might be easy to sit back and arm chair quarterback about their gesture but I think they could’ve gotten a much more desired effect by setting a fire during their set or connecting with Gaga or some other, higher profile act to spread the incredibly important message they sent through the open letter.

I think it would be impossible to make a gesture that could fall flatter and ring so hollow as waiting until every tour van and bus and fan had left the grounds and every piece of trash had been collected from the Coachella polo fields before publishing their open letter in the pages of a blog.

The spirit of our art and internet posts is drastically different than our actions, kinda like the lady on the United flight that threw a fit over the guy that got forced off but did absolutely nothing to stop it. I’m not above it, in any sense but to observe it in action is extraordinary.

Downtown Boys’ music rules. They’re super high energy, drive youth to crawl and jump off the walls with passion. The saxophone can be verbose or subtle to capture an emotion that words can’t do justice.

At one point of the show, Alice Bag got on stage to hop and sing and party with the band then by the last jam, drummer, Norlan Olivo jumped into the crowd with his drum and surfed atop it. It was one of those moments of pure musical ecstasy and release that audience enjoys vicariously through the performer. The performer requires a great deal of vitality and youthfulness to birth such a moment out of the possible and into the real. 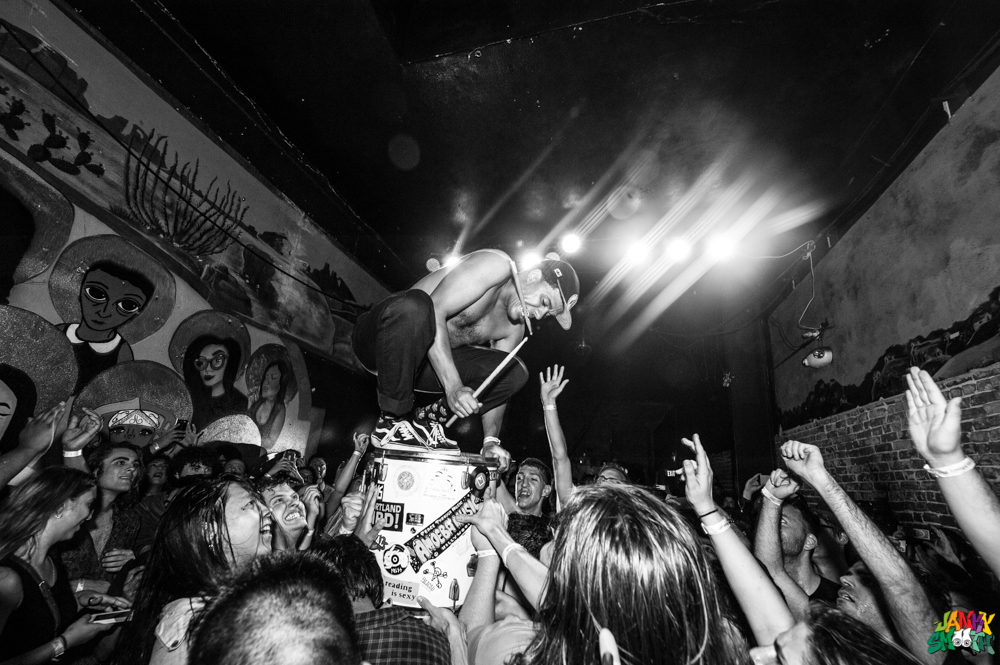 As much as I admire the band, they make me worry. They’re clearly highly intellectual but are they 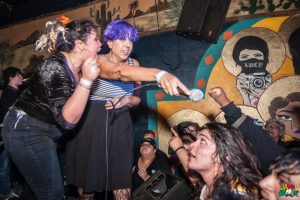 I worry that under the intention of fostering diversity, several other unintended and divisive consequences will arise. The lens of race relations has obscured every political discussion in this country and it’s making a culture that is devoid of the humor, satire, crassness, and frivolity that is inherent in being human. No race or marginalized class will be able to adhere to cultural guidelines that ban every ism or phobia.

I worry that identity politics will only be empowered by progressivism and will thus fuck things up for everybody. God willing, during the next democratic primary it’s not the “straight white male” who has the best ideas for policy. Hopefully it’s a person of color or a woman or best, a woman of color, because they won’t have a cloud of progressive complaint following them everywhere and tainting their efforts to help everyone- if that person even exists.

Lastly, I worry that I won’t get to see a world where what the Downtown Boys hope for the future comes to pass. You can’t force people to be perfect but you shouldn’t hate on perfection either. And tolerance and love between the whole human race is perfect. Where there’s no inclination to tell racist jokes, or gay jokes, or rape jokes- not because they’re banned but because hatred has been weened out of humans. That’s Eutopia ain’t it? 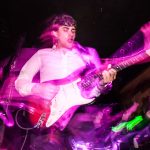 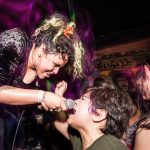 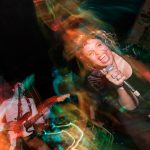 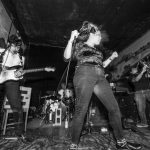 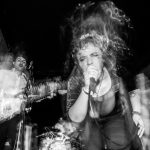