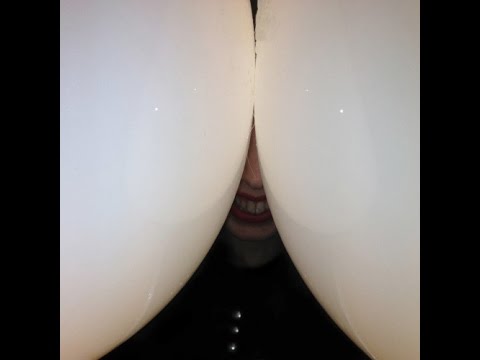 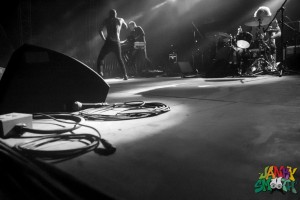 It seems that Death Grips have finally made it through the other side of their artistic adolescence. They have spent their entire careers rejecting and rebelling against “basic bitch-dom” in their relationship with fans, labels and music critics and up to this point, they’ve been as erratic as a pubescent teenager. Not unlike an adolescent Jesus in the lost books of the bible, Death Grips are using their power and influence to blind the bullies, even as their artistic output is as regular as a sensible diet that is high in fiber. While Death Grips toyed with unorthodox styles of music and career choices, there was no drop off in output. Their latest release, “Bottomless Pit” is their 5th, full length studio album and 9th release altogether and between the release of JennyDeath and BP, Death Grips have been showing up for every show as well as maintaining a regular tour schedule. Are Death Grips assimilating into a more traditional career path? That remains to be seen but being a Death Grips fan continues to be an interactive scavenger hunt for sound and imagery, as fans are always an integral part of their artistic output. In the past, they have leaked their album’s online, (much to the chagrin of their former record label) and with Bottomless Pit, Death Grips released the stems for the songs on their website for free, while still offering the traditional, paid digital purchase from iTunes and Amazon. After downloading the zip file and setting up the stems in Garageband, I had a new Death Grips album in my library after a fun little arts and crafts exercise. Even though, or maybe even because Bottomless Pit is still highly experimental, the songs that make up album are some of the best the band has ever written.

In the week I’ve been listening to Bottomless Pit on a never-ending loop, I realized what it is that makes this album the best Death Grips album to date. Even the most hardcore Death Grips fan has to give Death Grips a rest for a period of time to avoid psychosis and over stimulation. While the tortured, disenfranchised sound developed by Death Grips remains in tact, there is a slightly more accessible vibe throughout the album that is achieved solely through the vocals of MC Ride (Stefan Burnett). I can’t quite put my finger on it because the abrasive, deep, guttural emissions from his esophagus still assault the listener like a black or brown kid being beaten by a police baton but it seems there is a slightly more anthemic, rhythmic flow that actually allows for sustained sing alongs like the hook in song 3, “Warping” that also happens to have one of the best beats on the album, if you’re into violent head bobbing.

“Falling out in tune out my grooves, uhh, warping

All I do is lose my form, I’m warping

Falling out in tune out my grooves, uhh, warping

All I do is lose my form, I’m warping”

But there is no real difference in the depth and prototypical verbal encryption of the verses as MC Ride continues his assault on social commentary with tracks like “Three Bedrooms In A Good Neighborhood”.

The song “Spikes” is yet another Death Grips track that plays in between accessible and dissonance. The beat is frenetic and unorthodox and it makes finding the tempo in which to bob your head a trial and error of muscular comfort. I can just hear the live show in my minds eye with everyone chanting “Spikes, Spikes, Spikes, Spikes!” like an army of the noided and disenfranchised.

The beats remain raw and original. Every 808 hit and stretched out envelope and oscillating filter grinds on the inside of your stomach as it passes through the ear drum and finds every nerve in your body. Zach Hill and Flatlander (Andy Morin) need to be in the discussion of most influential beat producers of this generation. Selfishly, I hope it takes longer than it should for people to recognize the magnitude of their genius, so that we can hold off as long as possible on the inevitable collaboration with Yeezy.

With almost every classification in the book used to try and pigeon hole the Death Grips sound such as Industrial, Hip Hop and Techno, it always amused me when I saw large publications attempt to classify them as “Metal”. Metal? I never understood the correlation when it was made. Well, on Bottomless Pit, there are NUMEROUS tracks such as “Ring a Bell” and right in the opening track, “Giving Bad People Good Ideas” where heavy, distorted guitar tones were used prominently in the production of the beat. While there were some signs of this with Nick Reinhart contributing guitar on Jenny Death, those guitars weren’t quite as “metal” as they are on Bottomless Pit. Not only that but unlike past Death Grips studio efforts, Zach Hill’s drumming and traditional kit were used more generously in the studio for the album on those tracks and other, less “metal” but no less heavy songs like “Hot Head”. And while what I’m describing sounds like a bit of a departure from the established, highly original and beloved Death Grips sound, there is nothing about Bottomless Pit that feels like a betrayal to hardcore fans. I don’t expect any MC Ride piano ballands in the near future. 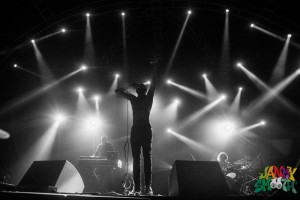 It unclear whether or not the tortured existence of the band, Death Grips was caused by internal upheaval, personal issues or some type of calculated marketing promotion. When Death Grips played FYF last August, they had just returned from their short lived break up between the releases of Jenny Death and Niggas on the Moon, it was one of the most highly anticipated sets of the festival. Their absence created demand from not only their hardcore fans but trendy fucks who really had an extremely short lived love for a group like Death Grips. The trees stage was packed from front to back and a huge cloud of dust was kicked up and rested above the audience throughout the entire set. There was violence and confusion. Flash to Coachella just a few weeks ago. Death Grips set was overlapping with Sia, FLUME and Miike Snow and the overflowing crowd that was crawling over each other to catch a glimpse of Death Grips was suddenly no where to be found. The cloud of dust and the violence RSVP’d yes, as they usually do at Death Grips shows but it was clear that only the most hardcore fans were in attendance. While Death Grips shows are becoming less and less rare, the demand created by their unpredictable nature and their Artificial Death in the West allowed the bewildered bro’s and ho’s that just HAD to see them at FYF go fist pump at FLUME during weekend 1 at Coachella.