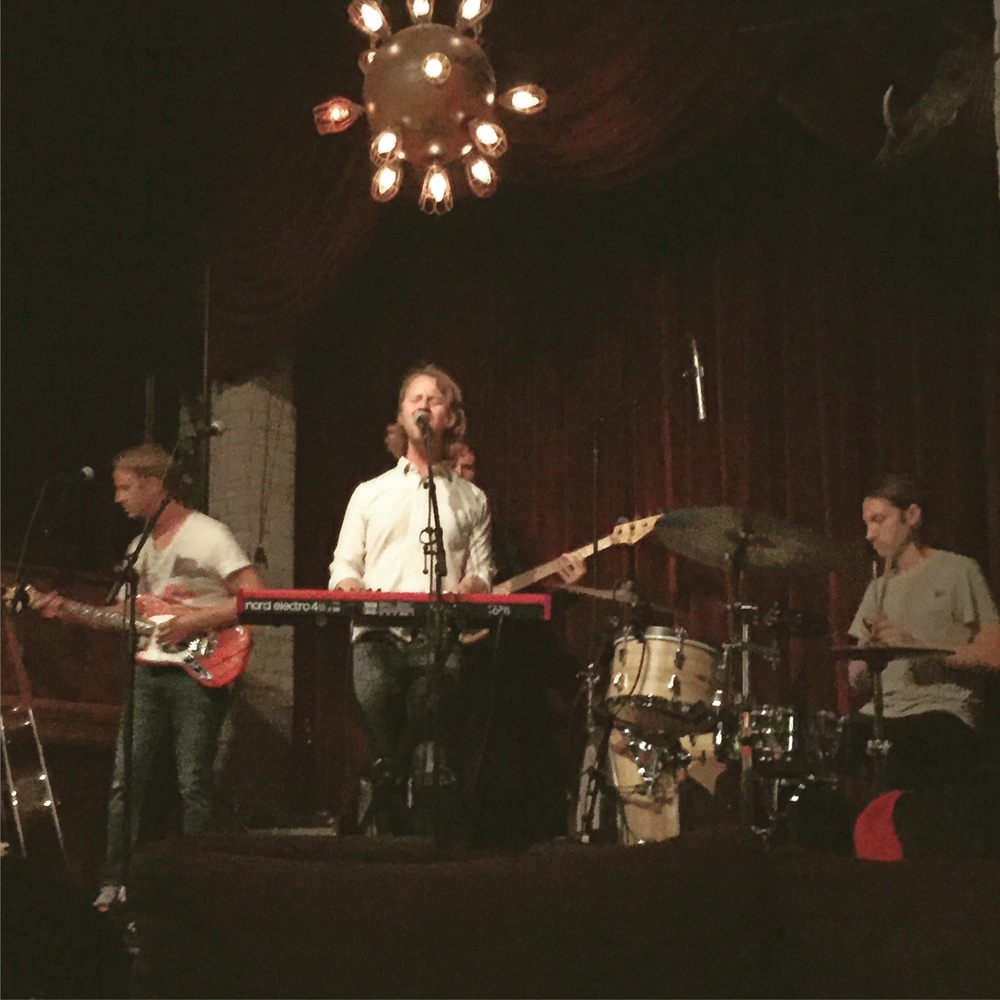 With the June 23rd release of their sophomore album, “Dancing at the Blue Lagoon,” Los Angeles natives, Cayucas, threw a private, invite-only album release party and Janky Smooth was fortunate enough to get the invite. Head North up Fairfax Avenue and there, sandwiched somewhere between the multiple bars and restaurants you will find a hidden venue. Or maybe you won’t find it because there is no name for the place. Literally meaning, your Instagram geotag will show up as “No Name.” Not that Instagram is actually relevant considering photographs were forbidden even though we got approval prior to our arrival at the venue. Fortunately for us, our stealthy and badass photographer, Taylor Wong, managed to snap some shots. This “No Name” venue contains exposed white brick walls and rugs that looked like they were directly imported from India — a hub for hipster elitists. It seemed as though the interior designer was devoted to purchasing anything that slightly resembled an avant-garde piece, and the hipsters are appeased with walls embellished with records by The Grateful Dead and The Beatles. The Edison bulb chandeliers and exposed piping that veined through high wooden ceiling was quite impressive, I must admit. However, as an individual who prefers to sit in a living room, drinking affordable beer while listening to records (or tapes, or CDs, or whatever is like totally cool these days), I found this place a bit too overwhelming; and especially overwhelmingly pretentious for a band as chill as Cayucas. I kept thinking to myself “Why? Juuuuust why?” It was difficult to grasp why, given their laid back style of music, Cayucas would throw a private album release party in a venue that contains multi-color, jean patchwork seating. Regardless of my personal vendetta for charging me $10 for a whiskey ginger, I truly could not understand why a band that projects such a quintessential Californian summer sound would be playing here. The quartet took to their instruments and simultaneously the lights began to dim. At this point, I knew exactly what kind of show I was in for – a somber one.

After being highly criticized in the media (but praised by fans) for their lack of originality in their first album “Bigfoot”, which was released in 2013, front man, Zach Yudin, seemingly wanted to differentiate their second album by attempting to eliminate the amount of vocal reverb. Yudin made this very apparent after performing their first song, ‘Moony Eyed Walrus’, which appears on Dancing at the Blue Lagoon, by requesting the sound engineer to “uh, make it less reverby please”.

An animated performance by the drummer and the bassist remained consistent throughout the set, yet I observed a rather detached vibe from brothers, Zach and Ben Yudin. Their dispirited performance was comparable to the unbearable ennui I experience on a date with a guy who refers to our horoscopes as a reference for compatibility. Perhaps Yudins’ effortless vocals and laziness to enunciate lyrics are directly related to promoting that “lazy day on the beach” ambiance they are notorious for. Even so, he still managed to display his impressive vocal range.

Despite that most of the individuals there presented themselves in a way that suggested they were actually listening, the entire set could have easily served as mere background music but with powerful strums, a downbeat tempo and harmonious vocals.  Anthem-esque, ‘Big Winter Jacket’ was appropriately suited for the environment in which they were playing. It wasn’t until ‘Champion’, their fourth song in, that the crowd and the band displayed any emotion other than “Hey look at me at this exclusive event.” It was hard to determine if it was the crowds’ unenthusiastic nature that projected onto the performers, or if it was simply an unsuitable venue that had generated such a solemn performance. They closed their set with vibrant tribal beats and catchy, yet simplistic guitar riffs, as revealed in the song ‘High School Lover’. I found myself, and only a few others moving along to the effervescent beat.

Cayucas’ exuberant album, Bigfoot, was terribly ridiculed for its similarities to Vampire Weekend and while the vocals do sound exceptionally similar, in all fairness, there is an infinite amount of bands that are synonymous with other already existing ensembles. In my humble opinion, we should pay no heed to such controversy and evaluate their music on it’s own merit. Their first album was noted by some for its vivacity and there are hints of such in their latest release, yet with a more unique approach. Combining surf rock vibes and afro-pop, their album release tactfully coincides with the summer days to come. One could easily listen to Cayucas whilst on a tropical beach, mai tai in hand (or conceivably that is just how I envision myself while listening to them in headphones next to my grubby pool). Cayucas has great potential to move crowds and I am optimistic that I will see them play in a venue deemed appropriate for their endorphin-induced tunes — in which case, I will definitely be there.