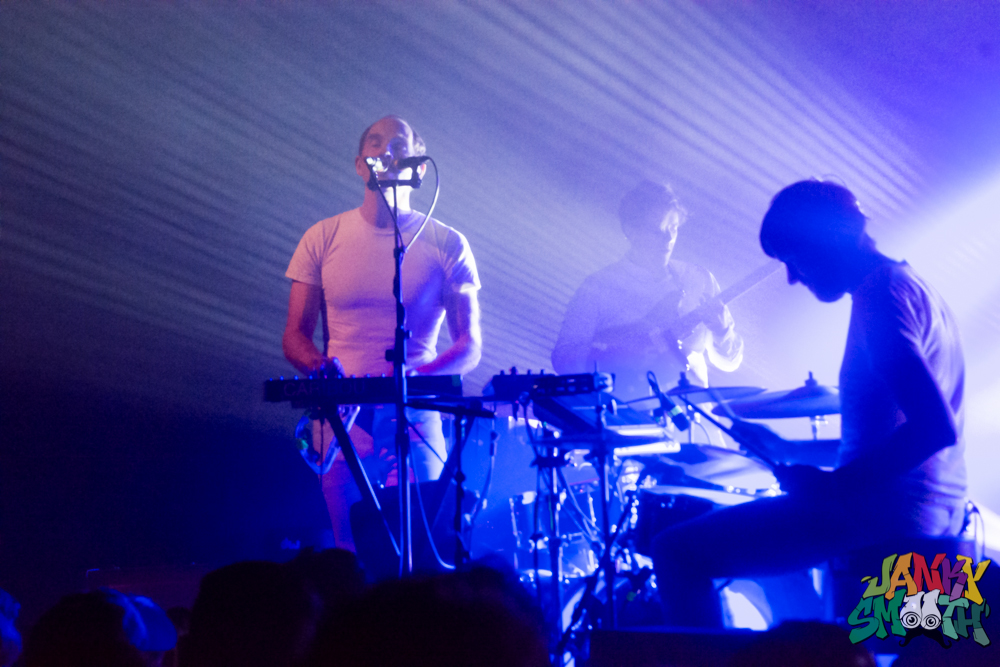 There is a difference between pushing “set” and pushing “play” and Dan Snaith of Caribou don’t push play. With all the fans of electronic music paying top dollar to dance to pre recorded tracks these days, Caribou comes armed with a show that is a digital jam session and a powerful arsenal of songs that possess an incredible amount of depth, sadness and redemption. 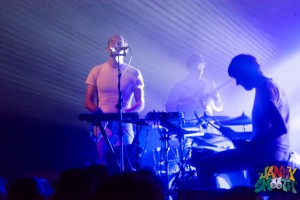 Caribou and particularly the album Swim, go into that rare classification of music that has brought tears to my eyes. There is so much creativity in the musical arrangements and the level of intimacy in the lyrical content is rare. Prior to the 3 sold out dates at The Fonda Theater this past week in Hollywood, I had never seen Caribou live. FYF 2014 was going to be my first time and logistical issues on the first day of the festival’s first year at Exposition Park caused issues with getting into the Sports Arena for my first Caribou show. Between missing Caribou and yet another Death Grips no show, it almost ruined L.A’s best festival for me. Thank god for Run The Jewels. FYF Presents made up for it in spades on day 2 of the festival and this week with three sold out Caribou shows at The Fonda. I was set to cover day 3.

Dan Snaith, Ryan Smith, Brad Weber and John Schmersal emerged from the wings of the venue at 10:30pm. Drums, bass, guitar and various synths and modules were packed together in a relatively tight little square on the large Fonda stage. All throughout the night I was repeatedly struck by the satisfaction that Snaith’s individual studio achievements morph into an undeniable group expression as a band during Caribou’s live show. I always envisioned one man surrounded by different components or maybe even just a laptop. Those type of acts have a hard time imposing their will on a large stage. That couldn’t be further from the reality of the Caribou live show. As Snaith works between a master midi control and a digital drum kit, lead drummer, for lack of a better term, Brad Weber, is the member of the band that is protruding furthest from the rest of the men and closest to the audience. The sound is very cohesive and the fact that almost every song played live is built from live looping is very impressive to the music snob in me. 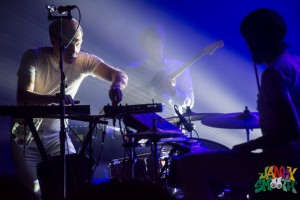 The set was exclusively songs off Swim and Our Love. The highlight of the night, by far was the song “Bowls” off of Swim. That song might be my 4th or 5th favorite track off that album but it was, by far, the most powerful performance of the night. Snaith sat down at his electronic drum kit, faced Weber and the band jammed that song out like it was written in a rehearsal space, not in a one man studio. Initially, the structure of the song was as it was written and recorded in the studio but then it gracefully shifted into glorious moments of spontaneity and improvisation that transformed it into a percussive masterpiece. The song, “Jamelia” was played virtually note for note as it was on the album and captured the dynamics and gut wrenching emotion of the studio version perfectly. “Odessa” was as haunting live as it is on the album. “Can’t Do Without You” was the last song before Caribou vacated the stage prior to the encore. As one might expect, there were many more people singing along to this song than any other.  Not too many words to remember with that one.

“You guys are the best L.A. crowd so far and I’m not just saying that”.

Snaith sounded sincere and it seems he discovered what I’ve been saying for years; bands who play Los Angeles on multiple nights get a better audience in this city the further they get from opening night. Once the VIP/Guestlist crowd is cleared out, the more the hardcore fans are present and that translates into a different energy. I stopped by the night 2 show about half way through Caribou’s set and I can attest to the huge difference in energy of LA audiences from one night to the next.

Saturday night’s show elevated Caribou to another level of for me. I was thoroughly impressed and moved by the high level of their live show. More electronic acts should take the painstaking measures necessary to translate their studio tracks to a true live performance. If DJ’s and producers are going to continue to move out of the shadows of dark clubs to the spotlight and large stages of festivals, then acts like Caribou should motivate them to give their fans more of themselves and a larger dose of authenticity.