Stand off at Standing Rock by Berry Ward

Cannonball ND– I arrived in the heart of the Dakota Access Pipeline, Standing Rock protest epicenter expecting to run straight into a chaotic battle between Native Americans and riot police somewhere in the middle of the road. All I had seen were the videos that had made it into social media feeds of protestors being shot with rubber bullets, maced, and beaten down with clubs but that is all I knew of the situation. I thought it was an ongoing, everyday unrest. No militarized vehicles ever appeared though, other than the occasional sheriff’s deputy passing by, I saw little law enforcement. What did appear as I crossed over a big winding hill, was a vast expanse of tents and tepees down in a flat area where the Missouri River flowed through. These structures covered both shores of the river. The next 11 days would not be what I expected at all.  As the corporate media begins it’s task to discredit the protestors as drug addicted partiers that are hardly focused on the pipeline at all, it is the job of all eyewitnesses to give their accounts so that the complicit corporate news media does not achieve it’s goal of destroying public support for the DAPL protesters, as it did with Occupy Wall Street, The Political Revolution and every grass roots movement since The Black Panthers. Instead of sustained tension, what I experienced after getting inside camp was a feeling of complete unity. I took a short walk around camp and was amazed at how people were all working together to run what, to my surprise, was an actual community. It was a society full of all walks of life and people working as one for the betterment of the camp.

There were community water tanks being donated and brought to camp, available to anybody who needed to refill their container.  There were food donations arriving all the time to supply the various community kitchens around camp where one could walk in and eat breakfast, lunch, and dinner for free. Food wasn’t the only thing being supplied to the people at camp, either. Anybody who needed extra layers or zero degree sleeping bags to stay warm could get them from the donations tent. I saw people chopping wood, building tepees, and cooking food. Oceti Sakowin camp is its own society. The kindest hearts have flocked there to help out however they are able to do so. Whether it be cooking oatmeal in the mornings or sacrificing your own body on the front lines to protect water, there is a job and a place for everybody. Not everyone is a warrior; some are cooks, some are builders, and some are healers. All these things are necessary for the survival of camp. I was also surprised to find out they consider the whole gathering to be one, big uninterrupted ceremony. Everything they do in camp is a ritual from morning to night. As soon as the sun peaks up over the horizon, people gather at the sacred fire in the middle of camp to walk together, down to the Missouri River to do what is called The Water Ceremony. This is when everybody prays together over the sacred waters they are fighting so peacefully to protect.

It took quite awhile for me to see any actions. The first half of my time there was spent working around camp- tasks like unloading food trucks and helping supply fire wood for the sweat lodges.

Things were slow until November 12th. That’s the day we all loaded up to drive into a DAPL worksite/equipment yard to march in ceremony and pray together. 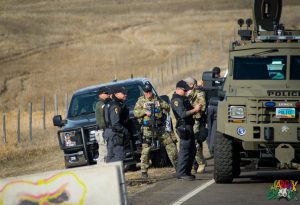 When the convoy assembled in camp and everybody was getting ready to head out towards the intended location of prayer, I just jumped into a bed of a pickup that was full of protectors. I was nervous when I found out that everybody in the bed of that truck with me were “arrestable” (willing to be arrested if the situation calls for it) but that was not an option for me. I wasn’t worried about getting arrested, I just couldn’t afford to have my camera seized. They promised to protect me from police and told me if something happened and I got snatched, I should throw my camera to one of them and they would take care of it until I got out of jail. The energy in the bed of that truck was very tense and I could feel that everybody was a little scared. It was like a scene from a war movie where a group of soldiers are on their way to an uncertain future. A future that could possibly be painful. Once we arrived to this DAPL site everyone assembled very quickly and strategically. They formed lines of people back to back. With arms locked they made a wall to block all traffic into the site. Suddenly, what appeared to be a big white DAPL work truck headed straight down the road toward us, swerving past the first line of people and around the media group where I was located. He didn’t try to avoid the second and third line though, plowing right through the protectors with no regard for what or who he hit. Luckily everyone was able to jump out of the way and avoid being run over. This was also the same action where a DAPL employee or contractor fired off live rounds into the air about 40 or 50 yards away from us, after he ran over a protector’s foot and smashed a woman’s hand with the butt of his pistol for trying to get him to stop.  Regardless of all the violent negativity from DAPL, the water protectors stayed peaceful and completed their ceremony. Live rounds and being plowed over by work trucks did not scare them away nor did it cause them to resort to violence. Despite what you may have been led to believe about the water protectors of Standing Rock, these protectors are some of the most beautiful people I have ever met in my entire life.  I think I am a better form of myself because of being around those individuals.  I am rejuvenated by the energy that is within the people and the sacred lands they are protecting.  I learned to get back to loving myself as well as others at Oceti Sakowin.  I learned to help my fellow brothers and sisters however I possibly can.  Not only did I learn to love but I also saw that battles can be WON with love, even when the people you’re up against are holding guns and clubs.  When the protectors gather, nobody has anything that can even be misconstrued as a weapon and the leaders make sure of this before the convoy leaves camp.  What they do bring though is their love, bravery, and prayers.  I have heard many people and media outlets claim that these protectors are rioting against police forces but that is not the case at all. This fight is not about the police. This fight is about the Black Snake that threatens our water and our future generations, water that the native people believe to be sacred. The police are standing in the way of victory over this black snake. The protectors consider every man and women in that uniform to be their brothers and sisters and it pains them to go against their “brothers and sisters”. This peaceful fight is a fight that needs to be fought- the fight to protect water, land, and future generations. Pain on the plains by Berry Ward

What you see happening at Standing Rock is more than a protest against the Dakota Access Pipeline. It is a conscious revolution- the coming together of our human race.  Our people are fed up with the archaic status quo of past bearings. The new generation has voiced loud and clear that racism, hate, and corporate greed will not be the norm of the future. The way I see it, this shift is inevitable. The higher ups and the last holdouts of the white patriarchy can only resist it for so long. 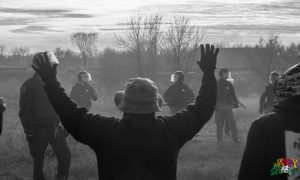 This new paradigm in human consciousness is slowly revealing the dank underbelly of the withering beast of the past and forcing it to surrender with love and compassion. Peaceful warriors of all ethnicities have flocked to Standing Rock, North Dakota to stand together with arms locked and in prayer to do battle with this dying beast.