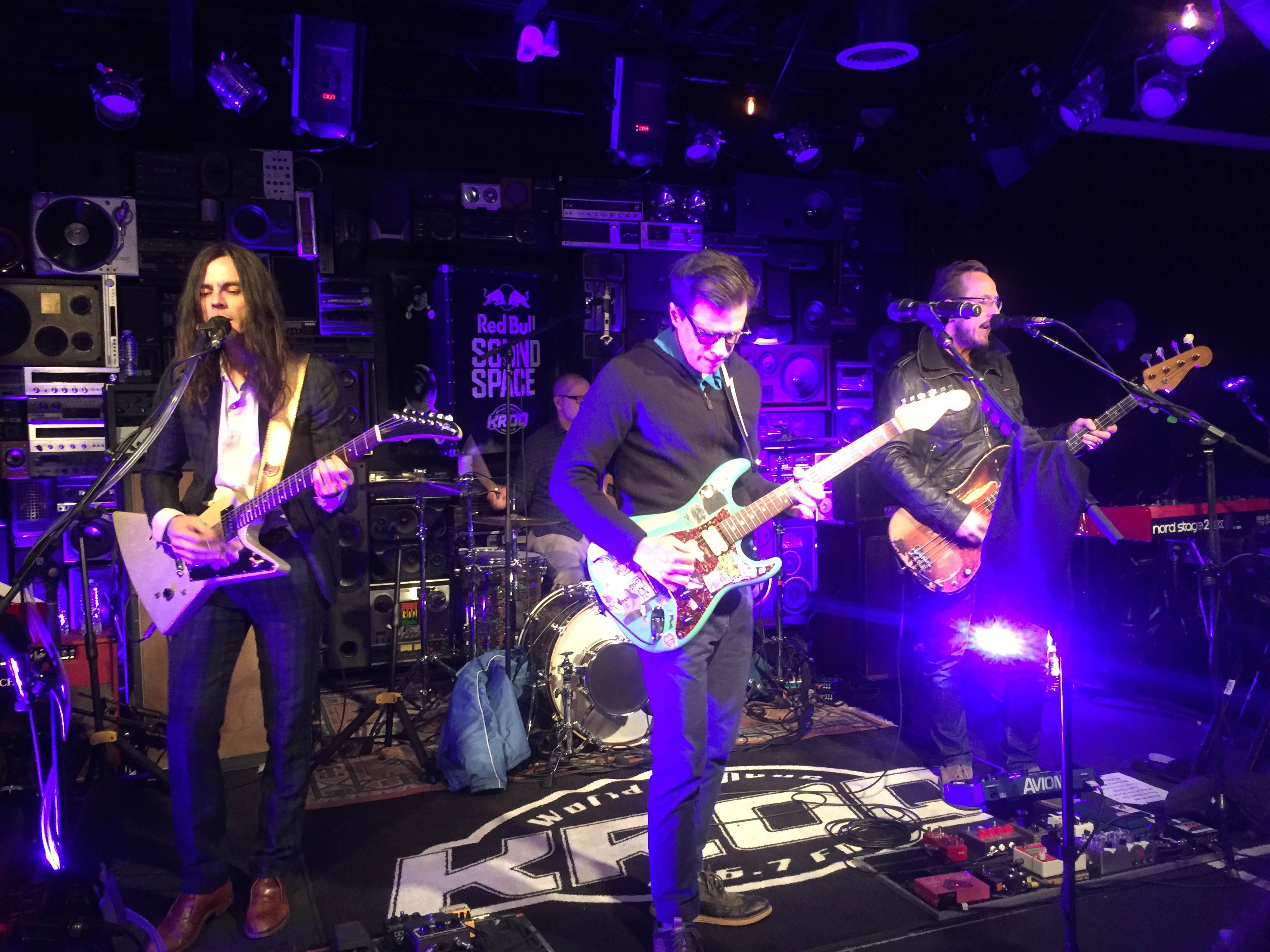 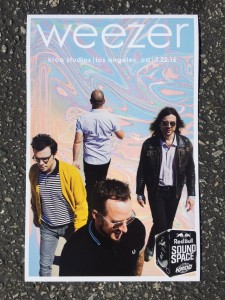 This Tuesday afternoon was made infinitely better thanks to our friends at Red Bull and KROQ! The two household-name brands teamed up a while ago to put together the Red Bull Sound Space – a full-fledged performance venue nestled in the back of the KROQ studio, where performances are broadcasted worldwide via the internet. Bands large (usually large) and small stop through on the invitation of the station to treat industry and fans to an intimate performance. You either win your way in via KROQ, or get invited, so everyone there is in an amazing mood. This Tuesday, in line with promoting The White Album and an upcoming co-headline tour with Panic! At The Disco, Weezer blew the hinges off the tiny room with a festival worthy set. The age of the crowd ranged from 8 to greyed executive, everyone was completely thrilled to be there.

Rivers, Brian, Scott and Patrick took the stage like they were casually settling in for a jam session – no banter with the crowd, comfortably timid nods to screaming fanatics in the packed crowd – and within the first heavy riffs of ‘Hash Pipe’, they slammed us all into action. Following up with full on sing-along to ‘Say It Ain’t So’, they helped everyone get cozy with nostalgic anthems from their catalogue. These songs got me through elementary school, high school and still have a solid place in my current rotation. Weezer grinned at each other during the solos, felt the lyrics as they sang them and maintained energy as if they’d just released the tracks. It is always a pleasure to see bands enjoying themselves and enjoying playing tracks that made their careers – rather than just going through the motions and getting them out of the way when playing a set. Weezer was happy to be there and knew they still rocked as steadily as they ever have. Rivers stayed introverted throughout the set, but his voice still hit the high notes and gave warmth to each track. Brian, Scott and Patrick held things together neatly – every time I’ve seen this band they are notably natural together. It felt like we were just watching four dudes jam in their garage, even if they were world famous rock stars.

The next three songs they played come from their upcoming release self The White Album (April 1st via Atlantic Records) and they gave major throwback sound to The Blue Album and The Green Album. As a lifelong fan who has skimmed over some of their recent releases due to not enjoying the change in sound, I was thrilled to nod along to the familiarly thick toned riffs on these brand new tracks. ‘King OF The World’ and ‘Thank God ForGirls’ are both singles off The White Album and ‘L.A. Girlz’ got it’s live debut during this performance. All three songs had overtones of being grateful and aware of what’s in front of you. They also alluded to being aware of troubles in the world at large, likely due to the recent surge in globally relevant news. I have a feeling this album is going to receive a welcome reception by fans old and new.

Wrapping the set with the west side appropriate ‘Beverly Hills’ and solid gold ‘Buddy Holly’ made this lunch break concert an incredible memory. It’s amazing to see Weezer have a 20 year back catalogue to fall back on, yet still pump out singles that have everyone singing the chorus. Their next tour will most likely be featuring tracks from all their eras, rather than focusing on The White Album, but if they did zone in on it I don’t think it’d be a bad thing. Can’t wait till to be back at the Red Bull Sound Space at KROQ to see what other heavyweights they bring through!

Say It Ain’t So

King Of The World (new)