You probably know The Lumineers from their folk-rock singles “Hey Ho” or “Stubborn Love”, but what you probably don’t know is that in a live setting they put on an full on absolute barn burner of a performance. They put Mumford & Sons in the shadows, the trio accompanied by supporting backline members ensnare you with genuine storytelling and joyously rolling melodies. Folk rock has never been so prominent in mainstream culture and The Lumineers propel themselves into Top 40 lists effortlessly.

We caught The Lumineers at the Red Bull Sound Space at The World Famous KROQ for a Monday afternoon encounter. They’re currently pushing their new album “Cleopatra” (due April 9th, 2016), which is a proper follow up to their self titled 2012 record. Almost exactly 4 years later, the Denver based group are ready to shine again. The brand new songs we heard from this upcoming record, “Ophelia” and “Cleopatra“, dove much deeper than their initial singles – more intricate stories told 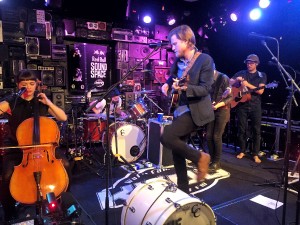 through honest lyrics and building upon instrumentation they know works. Wesley Schultz, Jeremiah Fraites and Neyla Pekarek – the base trio – explained their infinite gratitude to their initial tracks which broke them, and how happy they are to share the next chapter of The Lumineers catalogue. The songs they shared with us made everyone move, and more importantly made everyone feel something. From mandolin, to cello, to beaten up guitar – the band showed true merit through their musical skills. They were all very well versed in their respective instruments which allowed them to command the room with their presence. Their compositions, however, are very simple – the guitar only used in a few songs – but they were each memorable regardless of how simple they may have been. Heartbreak, love and joy were all recurring themes in their lyrics, but every song kept an uptempo pace to keep people dancing.

They’ll be heading out on a world tour to support this album, with a headlining slot at the Hollywood Bowl on October 5th. It will be great to see The Lumineers and “Cleopatra” received with open arms by the public and to see where it takes them next in their fortunate journey. Thanks again to KROQ and Red Bull for having us to the Sound Space, it is always a pleasure.