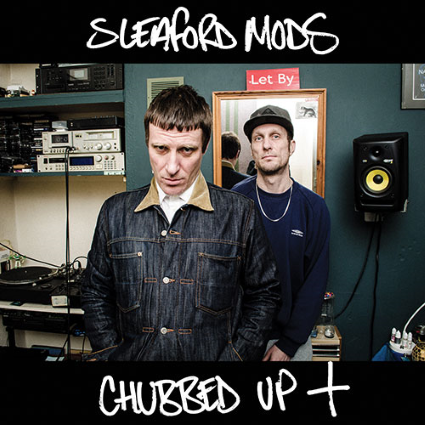 There is nothing quite like a subversive point of view set to a beat and a cockney accent. With all the pseudo-patriotic musicians in the mainstream and all this psychedelic revival amongst the youth of America and abroad, we look to England and bands like Sleaford Mods from Nottingham to create a proportionately angry voice for the working class. Their latest release, Chubbed Up + is an important follow up to the minor success and major statement made by their 2013 release, Austerity Dogs.

There is no sense that Sleaford Mods are “maturing as artists”. This album is a compilation of previously released tracks and new songs released on Ipecac. All their tracks feature the same, changeless, driving, monotone beats that are just a backdrop for vocalist, Jason Williamson to unleash his verbal assault against a new class of aristocracy and the sheep who allow themselves to be sheared on a daily basis. If you are looking for dynamic, musical arrangements then Chubbed Up + is not the album for you. If you are looking for signs of life and evidence of some type of pulse in the heart of man, then this might just become one of your favorites. The track Job Seeker is just as relevant in the U.S. as it is in the UK:

Sleaford Mods are more likely to start a riot than prevent one.  They are not concerned with your delicate sensibility or your political correctness. They only serve to incite the same type of rage and frustration in you that they feel in themselves, so that one day, we might all rise up together to place the bourgeoisie in the collective guillotine. They are a mix between old Oi bands like Cock Sparrer, Angelic Upstarts and Cockney Rejects fused with Gil Scott Heron. They are hip hop gutter punks that are swimming through a cess pool of humanity.

There are plenty of voices in art and politics today that are calling for cooler heads to prevail in the Western World- voices that call out for us to love one another and for tolerance. Voices that tell us we can’t complain unless we vote and are part of the process. Where are the voices that are calling for unrest and upheaval? What good did the peace and love movement do for us in the 60’s? JFK, RFK, MLK, Malcom X, John Lennon… dead. Inequality, racism, institutional bigotry, bureaucracy and the police state are alive and well and Sleaford Mods express what is too often, difficult for us to put into words.