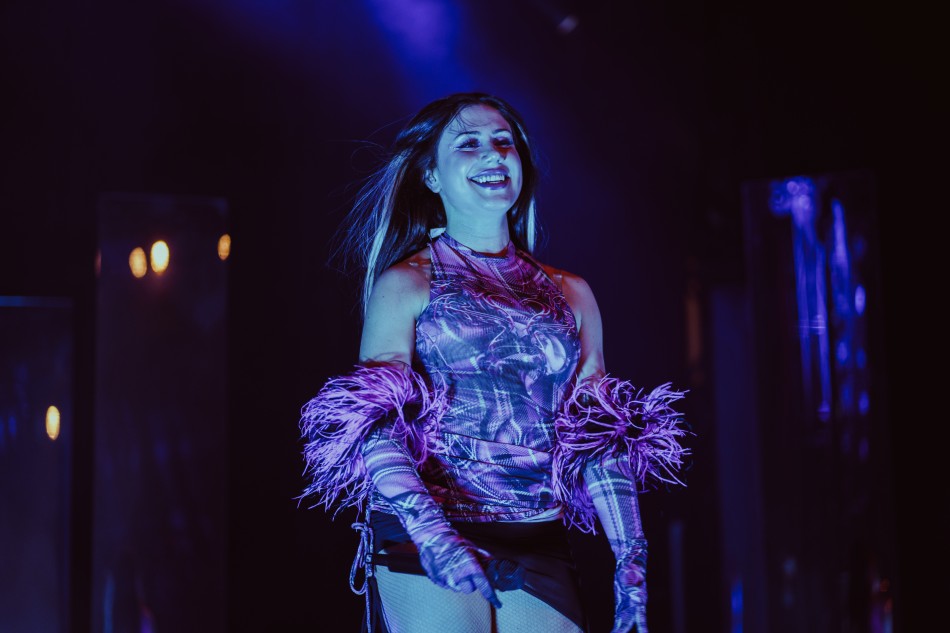 Slayyyter’s immersive Club Paradise experience at the El Rey Theatre last week represented a current transformation in what it means to be a pop star. While the genre has long been controlled by mainstream expectations, Slayyyter performs with a defiant attitude along with influences from more alternative music scenes to create an inclusive scene for fans of all walks of life. Pop music is currently in one of the most transformative states that it has ever been in, especially with an underground movement of pop artists incorporating more sounds from avant-garde and experimental electronic genres into the scene. Similar to how punk rock’s sound was rooted in rebellion against the safer styles of rock and roll bands of the 1970’s, independent pop stars like Slayyyter are a resistance to the commercialized sounds of pop music that have been prevalent for far too long. Slayyyter may bring more experimentation to the stage than the casual pop listener is used to, but her dynamic sound and bold personality make her the ideal performer for fans of pop music that are truly obsessed with the genre and its ongoing evolution. 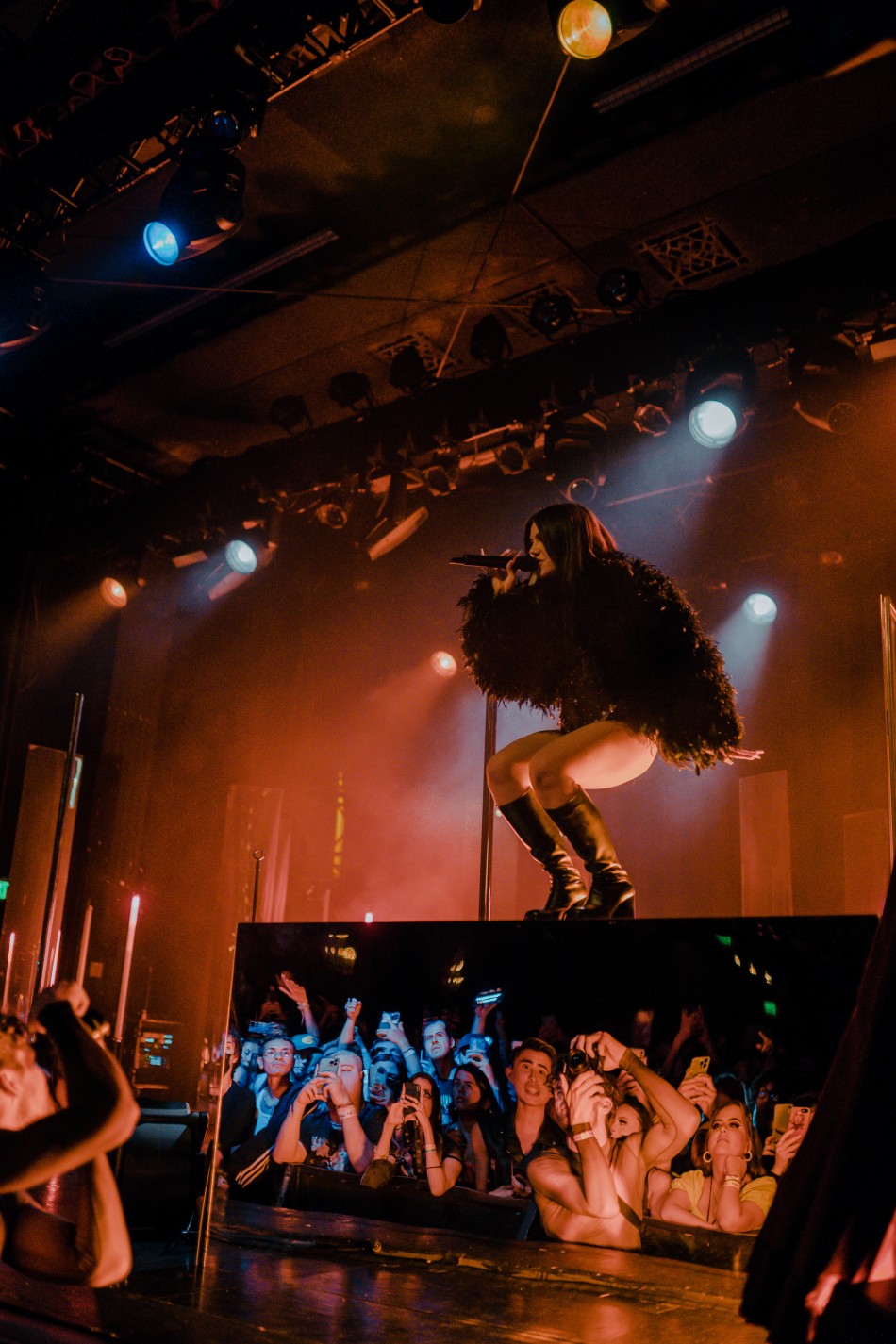 The first opening act of the night was Gia Woods, starting Club Paradise off with an explosive bang of theatrics and a dramatic stage presence to match. Although I had not heard her material before the show, all of the songs were so infectiously catchy that it felt as if I recognized them enough to sing along. The first visual feature of Gia Woods’ set that could be noticed immediately were air machines blowing her long hair backwards in the wind at all times, making her performance feel like a high-budget photoshoot or a music video. She was sporting a blue leotard accompanied by a baton that she danced extremely sensually with throughout the set, resembling a glamorous ringleader and further contributing to this music video image she had. The climax of her set was when she picked up a guitar on the stand behind her and abruptly jumped into shredding into a solo. The guitar had been there the whole time, but everyone’s eyes were too focused on her to notice. Gia Woods has the larger-than-life personality of a headliner at a sold out show, and she is sure to boost her way to that spot in the future. 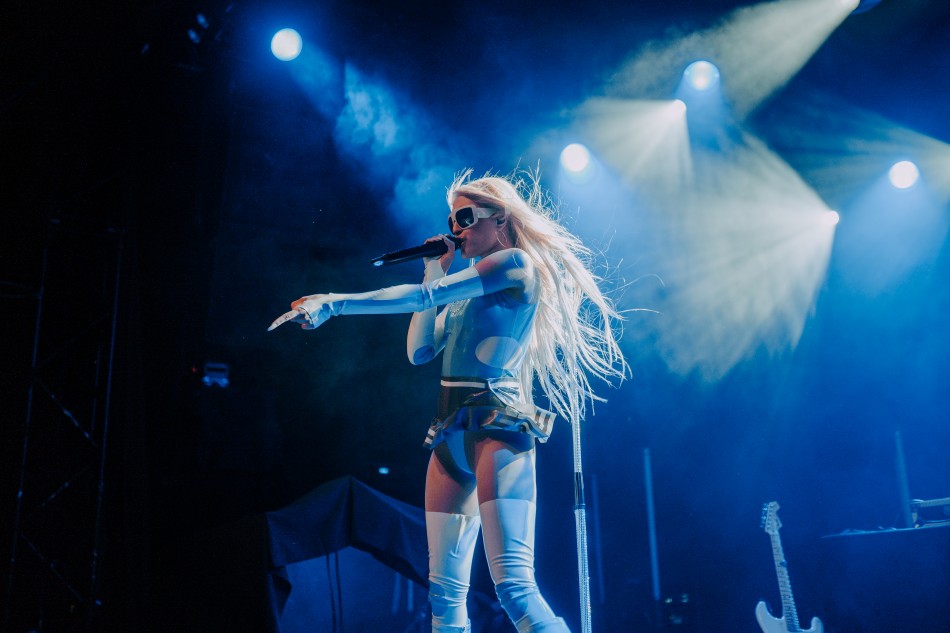 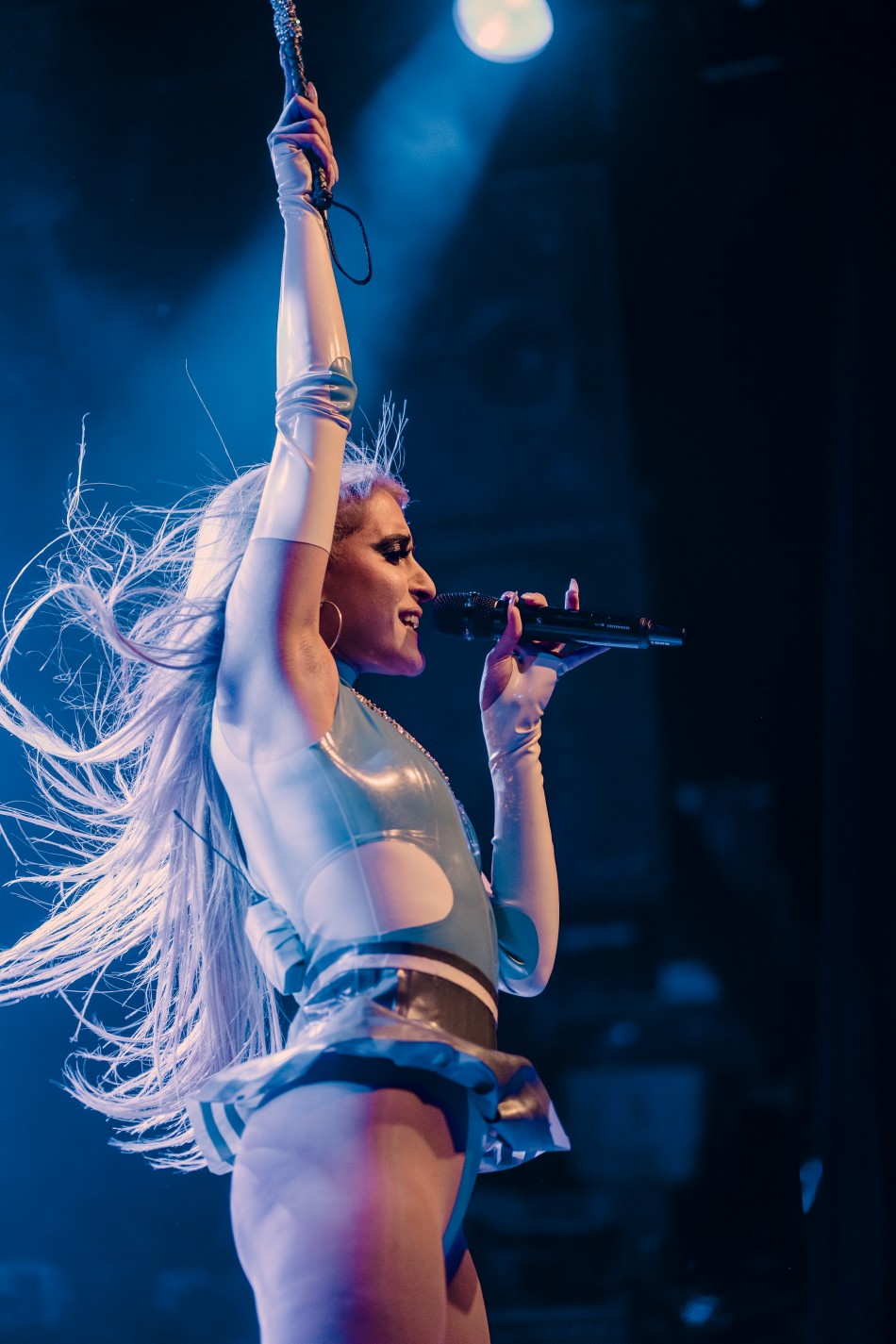 The following act of the Club Paradise experience was LoveLeo, providing a hybrid between a DJ set and a live performance. It was a refreshing break from the more dramatic live performances of the evening, providing an atmosphere more like a club event similar to Emo Nite or Club 90’s. LoveLeo hit the stage with a jacket with spikes on the back reminiscent of Bowser from Super Mario Bros, having a cartoon-y appearance only being exasperated by playing “Never Gonna Give You Up” by Rick Astley as one of the first songs. The crowd loved the entire aesthetic as he blasted into pop classics while performing covers of some of them throughout the set. LoveLeo playing “Unwritten” by Natasha Bedingfield was especially a hit, where the vocals of everybody singing along ricocheted throughout the room. It was a really charismatic and lighthearted set that set the mood for the late night of intense dancing that would follow. 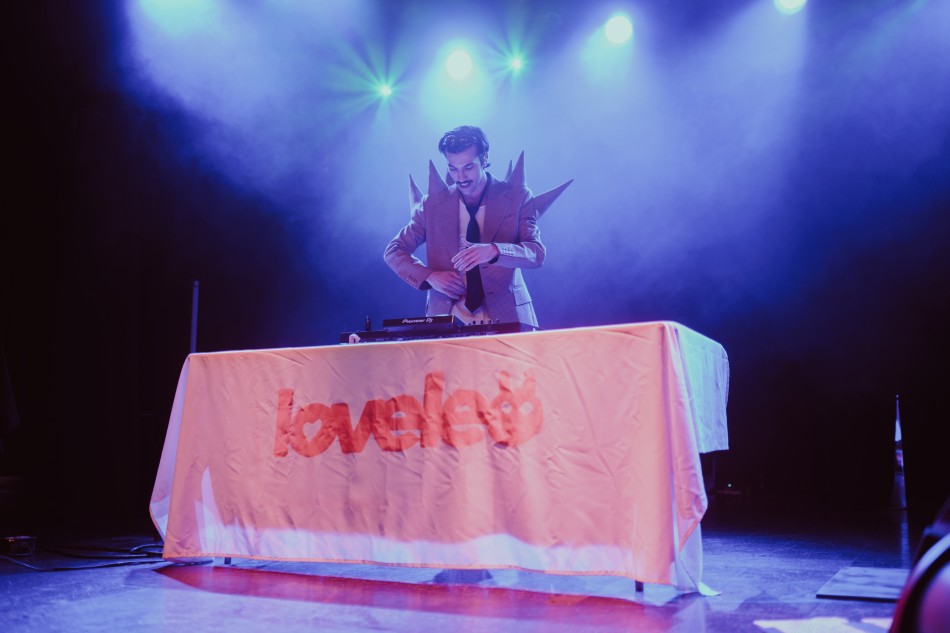 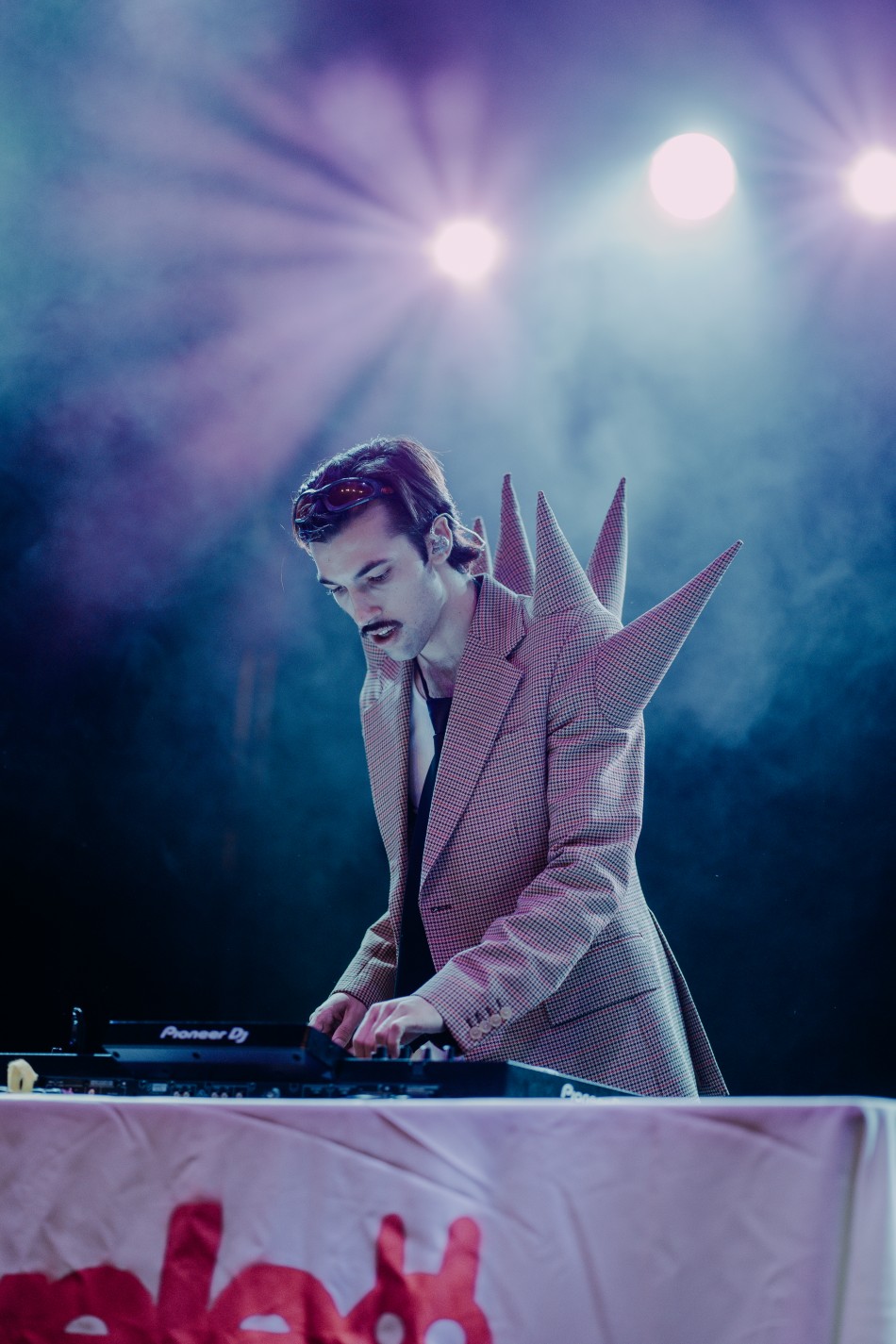 Ecstatic screams could be heard all around you as soon as Slayyyter’s silhouette appeared on stage while the opening bass line for “Self Destruct” played. Although the El Rey Theatre is a smaller venue, her stage presence demands an enthusiastic reaction from the crowd that could fill any major stadium. The track is incredibly heavy and more

industrial-influenced compared to most of her other songs, and the aggressive way that Slayyyter addresses the crowd while singing makes the track much more intense when played live. This song was an excellent choice for an opener, as she demonstrated to the crowd that they would be experiencing a wide and extreme range of emotions throughout her setlist.

After playing an energetic streak of some of the more upbeat songs from her newest release, “Troubled Paradise”, she broke into her earlier works with roaring approval from die-hard fans in the audience. The early singles “Alone” and “Candy” are gritty and raw in their sound evoking influence from Blackout-era Britney Spears. It was clear that this segment of the set was a throwback for the fans of her earlier club-influenced aesthetic and she was bringing the rowdy nightlife of these underground clubs to the El Rey Theatre for the evening. “Daddy AF” was an explosive finale to this part of her set, with the crowd jumping in a frenzy and singing along as Slayyyter thrashed around the front of the stage towards the audience with the dominating appearance one would see from a heavy metal frontman. 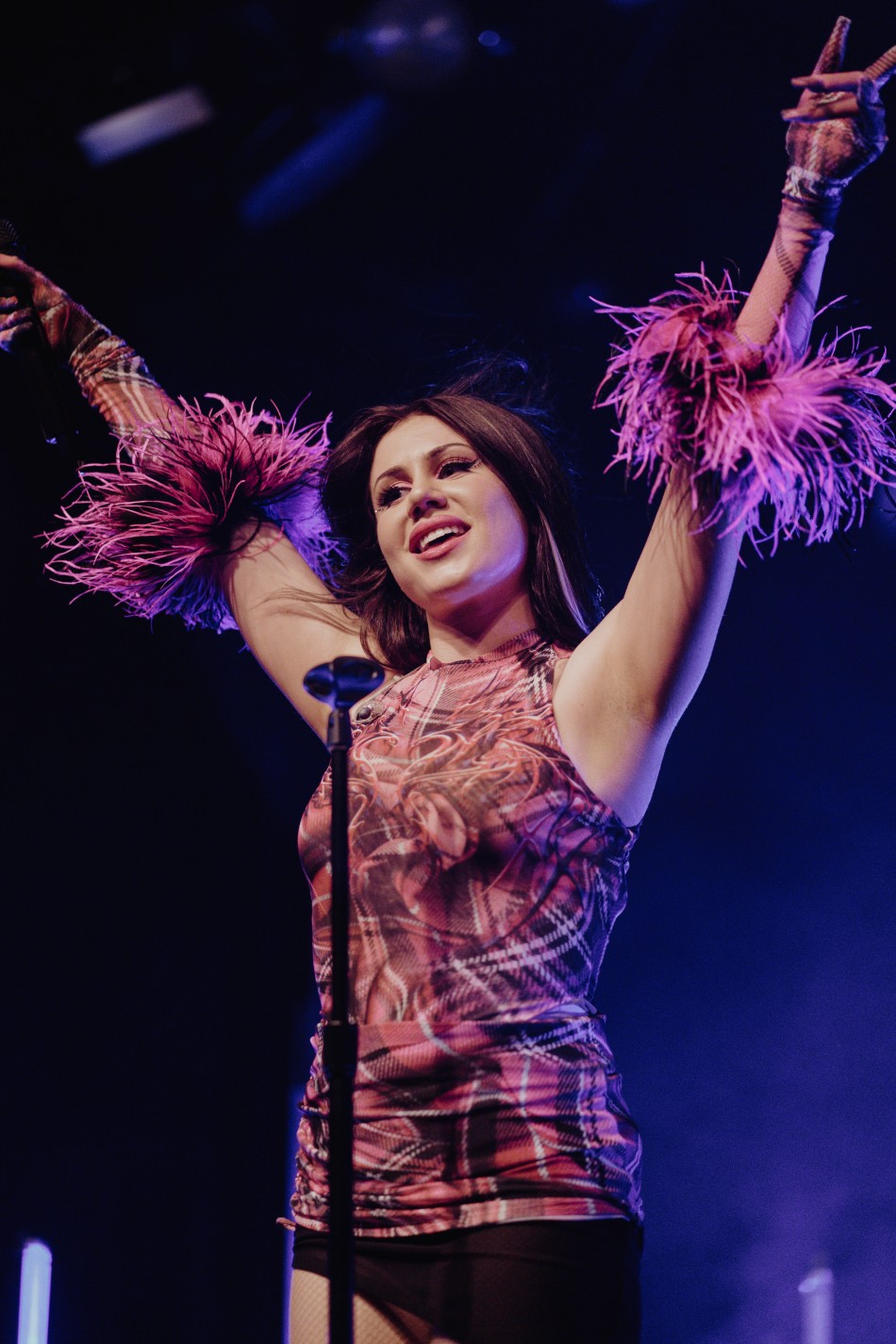 After a block of high energy fan-favorites, Slayyyter would slow things down to move onto the next segment of Club Paradise. She temporarily left the stage for a wardrobe change while her DJ kept the spirits high in the room, playing garage beats and jumping away from the turntable to hype up the crowd with high charisma. The change of outfits throughout the set were crucial moments in the performance, especially here where she settled the crowd into some of the more atmospheric songs from her newest album “Troubled Paradise”.

Everybody in the crowd knew what song would kick off this part of the set as Slayyyter hit the stage in a sparkling silver cowgirl outfit while the opening riff to “Cowboys” played. The song has a very cinematic feel resembling the epic structure of a classic rock song, matching the lyrics about Western themes brilliantly. “Troubled Paradise” was a much less abrasive album than her earlier works, focusing more on building a hypnotic and ethereal atmosphere to match the themes of empowerment after heartbreak. While the crowd might not have acted as wild during the more mellow tracks from this album, it was clear from the applause that the room was infatuated with her during these moments. Slayyyter may be a bit more underground and independent, but her fans have the same obsessive passion for her that you often see with mainstream pop stars. The thunderous reaction when she announced that she would be playing an unreleased song is only something you witness from fans with this much adoration for the artist they’re seeing.

The crowd went absolutely nuts when Slayyyter broke into “Throatzilla”. A recurring theme throughout the night was that the more sexually explicit the song was, the more rambunctious the crowd became. This connection makes sense due to a very large portion of Slayyyter’s crowd being from the LGBTQ community, as there’s a strong empowerment that comes with singing along to these highly sexual lyrics and dancing freely without judgement in a crowd of others doing the same. This liberating escape from societal norms regarding sexuality is a freedom that Club Paradise emphasizes, and Slayyyter’s vibrant stage presence demands that everybody participate. 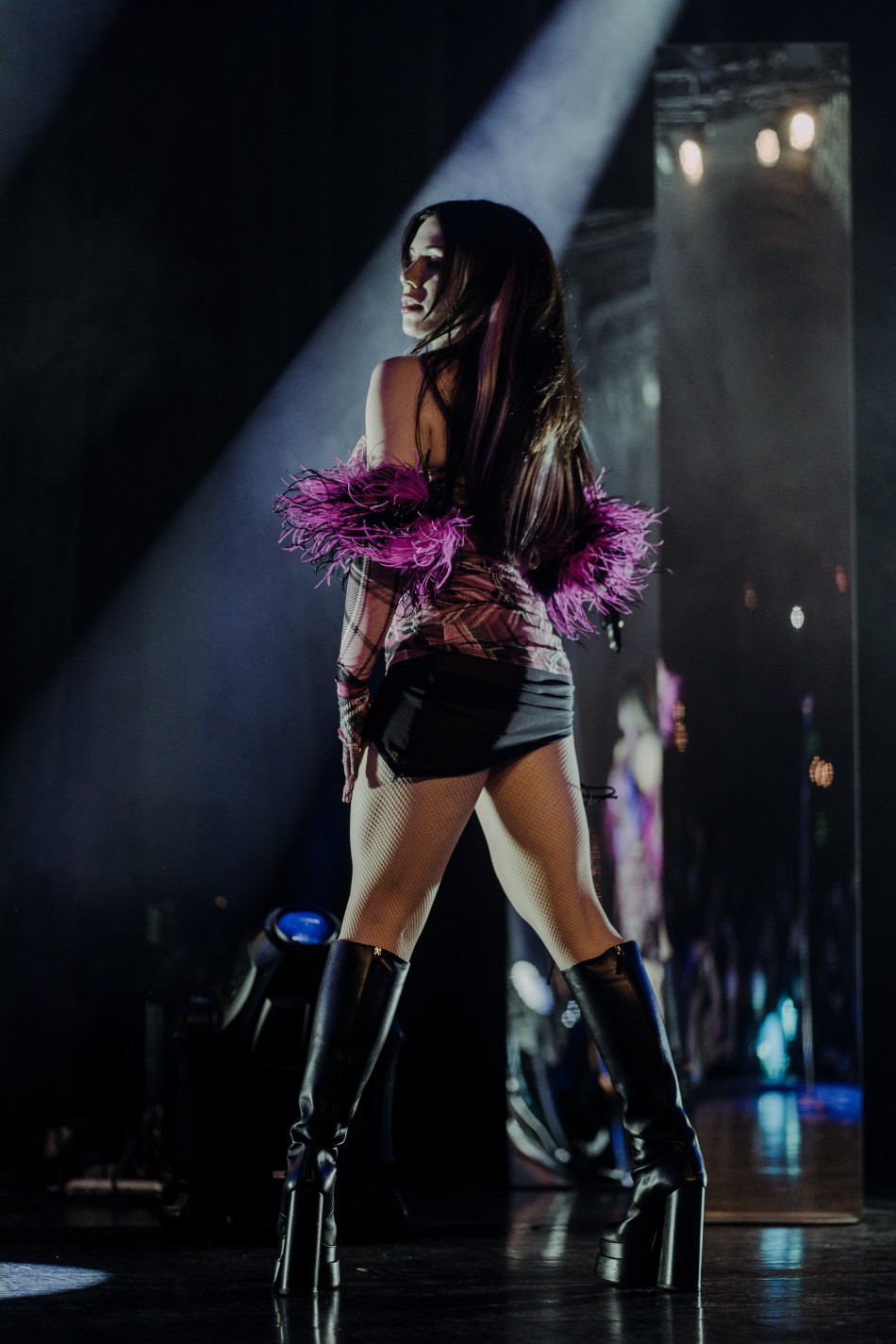 Slayyyter could not have picked a more perfect song to close the evening with, being one of her early iconic singles “Mine”. As soon as the opening drum break hit, the entire audience turned into a vibrant dancefloor that embodied the Club Paradise aesthetic she had created for the night perfectly. The track’s smooth house-influenced groove instantly raises the serotonin levels of the listener to 11, making it near-impossible not to move along with everybody around you. The single has already become a classic anthem in hyperpop circles at LGBTQ club events, but the song has a powerful aura that is destined to dominate the dancefloors of major festivals across all electronic and rave scenes in the future.

While mainstream audiences may not be aware of how much counter-culture has impacted pop music throughout the years, upcoming independent pop stars like Slayyyter wear these underground influences on their sleeve and invite more alternative crowds into the pop scene. In contrast to the sanitized and corporate-friendly traits that many associate with pop music, there is a rising wave of artists incorporating more provocative aspects of their personalites into the genre with the more experimental sounds of IDM, industrial dance, and happy hardcore. Slayyyter is breaking ground in so many ways for pop artists to incorporate unexpected influences into their art, that hopefully every pop star will host their own Club Paradise someday. 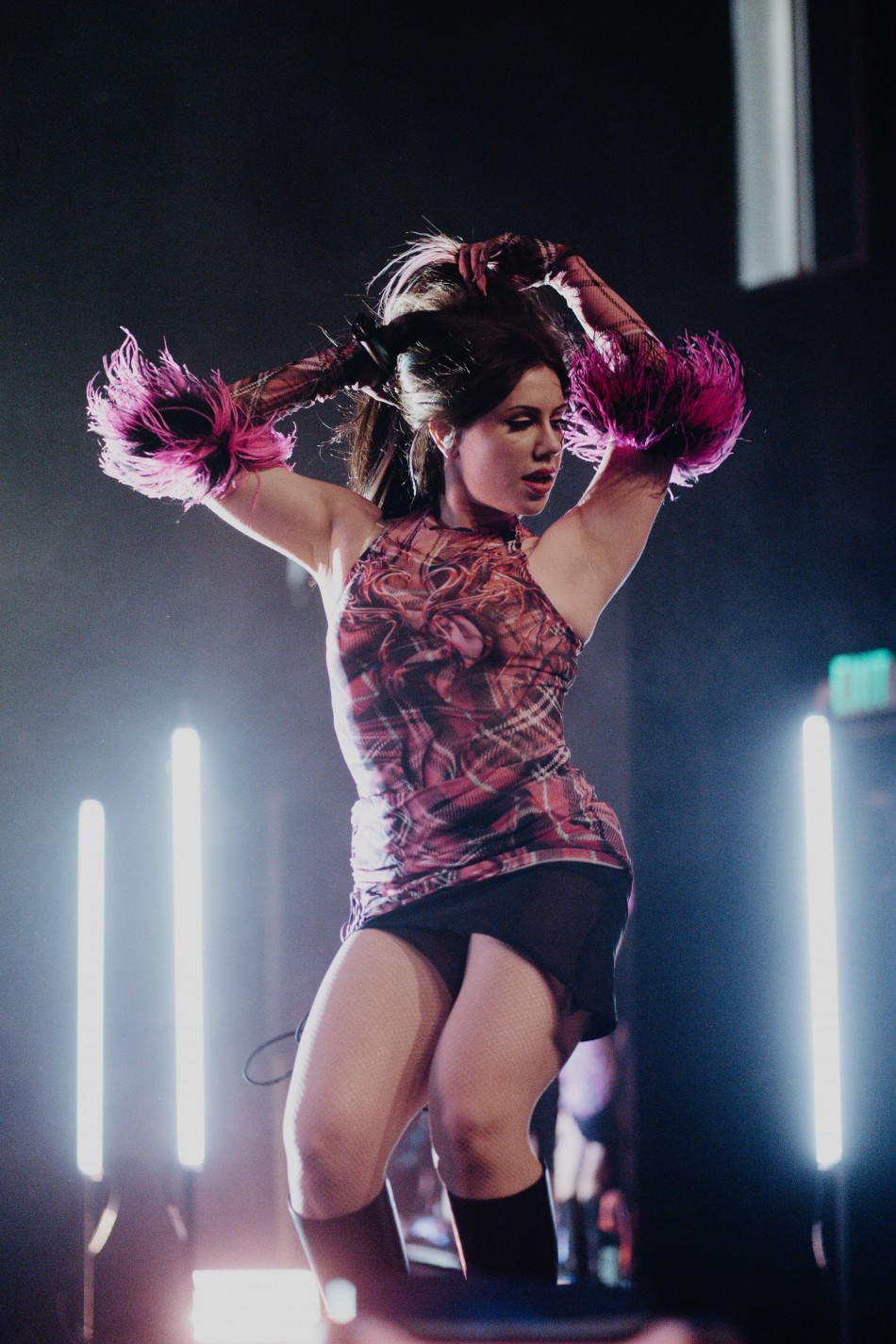