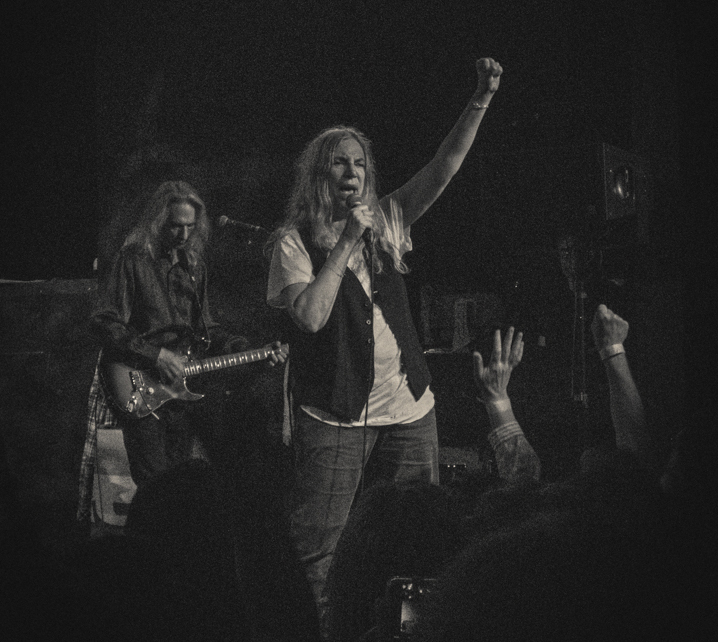 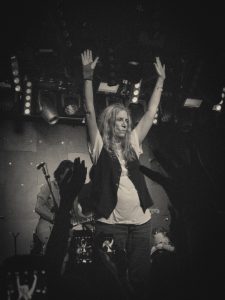 Patti Smith at The Teragram Ballroom

It’s nearly impossible for me to imagine Patti Smith as anything less than a mythic figure in the pantheon of rock and roll history. I’ve engaged and wrestled with her work since my teens and her stature in my mind has only grown since those fruitful years. How thrilling was it then to regard this unrepentant icon of rebelliousness as a woman, an artist and lover of life as she graced the stage of the Teragram Ballroom in Los Angeles this past Tuesday night, April 4.

A review of a Patti Smith show almost seems at odds with the very nature of a Patti Smith show but here I am reflecting on a night that left me emotionally spent and creatively ignited. I’d seen Smith perform before but this night held a special significance. In the past, I had the opportunity to catch her in very large theaters, festivals and even an arena however the 600 capacity Teragram was by far the most intimate setting I had ever borne witness to Smith’s spellbinding antics.

The Mojo is in the Mania

In concert, Smith is a perpetual dynamo, a force of nature meant to be experienced and reckoned with. Here is a woman now (proudly) in her 70’s who on Tuesday night was equal parts bonafide rock star, spitting and snarling her way through a set that ran the gamut of her career while also serving as a shaman, channeling the anger, neurosis, fear and dread of everyone in the room and turning it into energy. An energy that has the power to challenge the status quo and free otherwise confined minds. In other words: just another day at the office for one of our great agents of change.

Smith began the night, appropriately enough, by opening with “April Fool” off 2012’s Banga before addressing the audience and quickly dispensing with any preconceived notions of what might be in-store for the night. The show was billed as “Horsin’ Around” but before our imaginations could abscond with thoughts of a complete run through of her seminal debut album, the playful poet laureate schooled on us what that entailed exactly.

“Some of you may not know what that means…” Smith teased. “It means a severe lack of professionalism,”

…and with that Smith set the tone for evening: it was her show and we were going to play by her rules (including forcing me to take photos with my cell phone instead of my pro-gear).

As she segued into the bouncy and ebullient “Redondo Beach,” followed swiftly by the torchy Amy 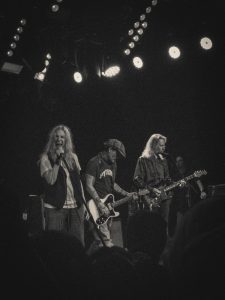 Winehouse-dedicated “This is The Girl,” a genuine sense of the joy of performance in Smith washed over me. Many of the songs performed this night were tried and true tracks that have weathered years of rehearsal and repetition however, there was not a moment during her time on stage that felt phoned in or routine. She gave us everything in her arsenal and left nothing for the cutting room floor.

Between songs, Smith entertained and enthralled with fleeting glimpses of the more mundane moments in her life: catching up on episodes of Doctor Who, her reluctance to long flights and the pleasure she finds whenever she sees the “Life’s Good” slogan appear when powering on an LG television; each revelation more endearing than the last. At one point she mused that she’s likely told some of these stories more than once to fans, but then eschewed any complaints by simply framing her on stage ramblings as a make good for her lack of social media presence, “I’m just giving you all my Twitters now.”

Drifting from time to time away from her own work, Smith also performed a haunting rendition of Lou Reed’s classic “Perfect Day,” and prefaced Bob Dylan’s “A Hard Rain’s A-Gonna Fall” by preparing the crowd and telling the gathered that “This is a long song.” Once the all too familiar chords kicked in however, there wasn’t voice in the theater that didn’t fondly acknowledge and chime in during the well worn chorus.

As the impeding feeling of finality drew near, Smith unleashed with all the power and might in her bones and willed to life perhaps the most impassioned performance of “Horses” that I had yet seen or heard her perform, be it live or on record.

“Come and get me motherfucker,” she dared as the room fed off her manic being, culminating in a near orgasmic offering of her beloved “Gloria.”

Ever defiant and always inspiring, Patti Smith was and is a giant whose legend seems to be only further lionized as the years tick by. It’s not just the work she’s done that’s so impactful but what she drives and sparks within her fans that continues to leave an impact on this world. At night’s end, when Smith and her cohorts (which by then included guests Johnny Depp and Aerosmith’s Joe Perry) sang an encore of “People Have the Power” there wasn’t a person in the room that didn’t believe it. That’s the power of rock and roll, that’s the power of Patti Smith.