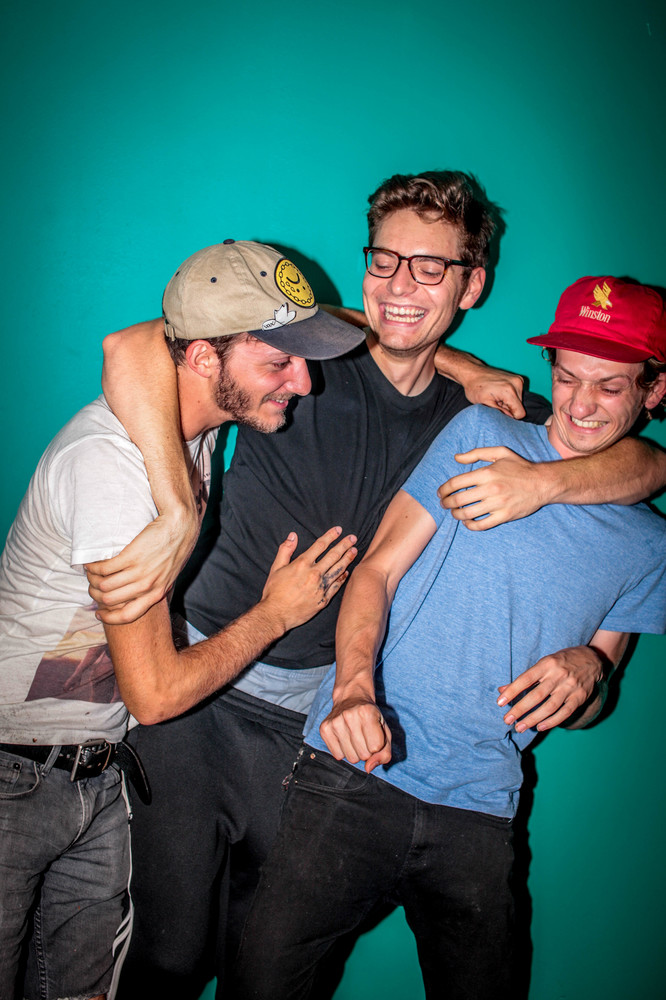 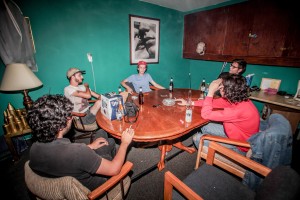 I met Theo Cohn, David Gantz and Ben Mullen, at their house in West Adams, Los Angeles, a few days before the release of their most recent music video. Before the interview even began, I caught the boys discussing the release party for their new video, ‘Norma and Jessica’, for LA surf-punk aficionados, SadGirl. They had been in the office for all of five minutes, and already they’d slipped into work mode, discussing technicalities with sound and video projection, as well as how much beer would be needed to placate the crowd. It was a testament to the trio’s work ethic, which throughout the interview, grew to a daunting point where you could begin to understand the difference between crafting a good music video and crafting a great music video. 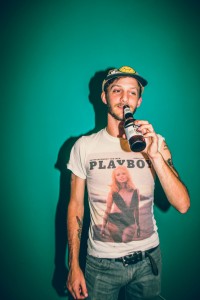 To first understand the boys though, and where there magic comes from, you have to understand what they commonly refer to as “The Nest”. The Nest, located right down the road from USC, is the house where the trio work, party, eat, and sleep. Out the back, there are three garages. Two of them have been converted into a DIY performance/rehearsal/storage space for Theo and David’s band, Wild Wing, while the other serves as an office for just about everyone who’s working on any given project. “The garage door is always open, people tend to float in and out”, said Theo, which makes it no real surprise that most of the people they work with are their friends – or they end up becoming friends. The office itself is a small, stuffy garage, strung with props from recent shoots, a Helmut Newton poster, a freezer full of film, and an oval dining table where, David said, is the only place he can do work now. I asked them for an average day at the “office”: “As soon as we wake up we’re in here, we get up at like 9, or 10… Coffee! That’s actually the first thing, laptop and a cup of coffee. Then throughout the day, maybe a costume designer or whoever will drop by, we’ll go scout some locations, and then we tend to go to sleep at 2am”. I was baffled by how they were able to fit in all of this is, and still stay alive. I asked if they had jobs, “sometimes”, Theo laughs, “Sometimes… we’re all freelance”. 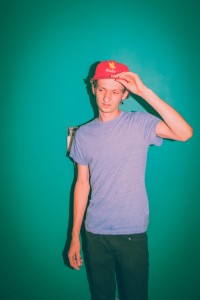 If you didn’t think they were busy enough, Theo and David also spend their spare time together in an Americana punk band called Wild Wing, while Ben probably spends his spare time trying to figure out how to pan like Robby Müller (and probably succeeds). They spend days in production for their videos, and nights playing sweaty crammed warehouses, all to wake up hungover the next morning and do the same thing again. Theo describes it as a double life, because it’s hard to think about the other whilst doing one. However, both sides tend to lean on each other; for example, they never would have met the SadGirl dudes if they were in Wild Wing — until they happened to play a show together. SadGirl let the boys choose the song for their upcoming video, a liberty not usually given. “Norma and Jessica was the first song SadGirl played when I saw them live”, said Theo, “That was the song, that was the one I was like holy shit, this needs a music video. A few months later, with the help of a rampant Kickstarter campaign, the trio was on set with Machete star, Danny Trejo, filming the ‘Norma and Jessica’ video, which looked like a better sequel to Mad Max. I don’t know how many music videos are crowd sourced these days, but it’s clear that the DIY nature of the project and the fundraising process did not affect the quality of the final product one bit. The quality of their product is simply breath taking. Besides being the coolest band they’ve ever met, SadGirl also happened to be their friends, which mean in between scenes they’d just shoot the shit, because, well, they could. “Being on set with diva bands, it’s kind of the green M&M’s for writers”, said Ben, in contrast to SadGirl, who was happy to go any direction they pushed. 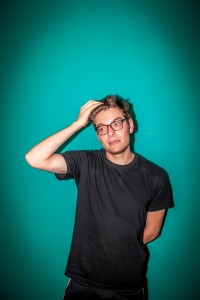 David and Theo have known each other forever, literally. “Our mums were friends when they were pregnant with us”. Two French babies in LA, destined to make things, together. They’ve been making films since the age of 10. The two boys would do their own DIY movie trilogies that would mirror popular movie trilogies, but with their own twist. Their mums would walk through shots, they’d constantly laugh, but they’d never drop a scene. Real honest filmmaking if you ask me, and more importantly a testament to their imagination and drive, which has only blossomed with adolescence and adulthood. Ben on the other hand, met the two filmmakers later in life, more specifically freshman year of college, where David and Ben roomed together. Ben and Theo met one night when Ben was getting something from the room, real late at night, and accidently kicked Theo on his way out. It was the beginning of the dynamic that would work for everyone. “The first movie we all made together, we made the most amazing film we ever worked on… I think we peaked”, Ben said dryly, while the other two tried to hold in their laughter. If you haven’t checked out the movie, it’s called Hell Night, it’s a 20-minute short, and you should absolutely check it out. “Definitely watch it, and show your friends, because it’s a masterpiece, but it’s also early work. We had pure ambition, and absolutely no idea that we could not do anything, anything was possible, we had two months of prep, one just talking about it”. This was the beginning of it all, and after watching the short film, and seeing a lot of their newer, more ‘refined’ music videos, I could kind of see where it all started, and all the areas they’ve drastically improved on. 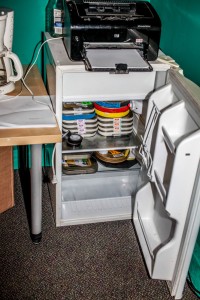 It’s easy to convey a point quickly using short form mediums, but the boys were struggling to find an audience for their short films, because in truth, the audiences for shorts are slim. Music videos, on the other hand, are universal. You can see how many people watch your music video; you can’t do that with a short film. I asked them about their approach to filmmaking, and why their videos usually turn out so darn weird: “We try and take in a weird direction you’re not expecting, we like to play with audiences expectation. When you watch enough movies you know what all the clichés are, and everyone else watches the same movies you do, so you give them the cliché they think they’re gonna see, but then you do something else”. What’s fascinating is how much they believe in what they’re making, how far they are willing to go to make it, and how little of their vision they’re willing to sacrifice. Even when pitching videos to bigger bands, they always stick to their guns, no matter how outlandish their idea may be. The thing is, now they have the resume to back it up, proving not only can they think it up; they can also pull it off, usually in stunning fashion. When coming up with an idea, the boys all unanimously agree it starts and ends with the song. They don’t make videos off songs they don’t like (“It’s the fucking heartbeat of the video” – Theo). 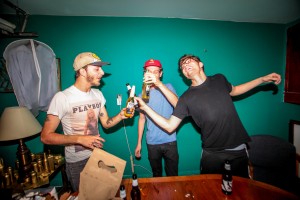 Because they all grew up together, they all have relatively the same approach to filmmaking, they all like the same movies, and they all want to emulate their favorite filmmakers; which makes things easier for three imaginative guys with strong opinions. “We sit in a room and throw things at each other”, says David, but they have some basic rules too. ‘Always have a backup plan’, seems to be their creed, but they attribute their success to two major points, preparation, and the Film Gods. When I asked Theo whether he lived for the feedback, he replied, “I kind of live for making it… it’s a bunch of people trusting each other 100 percent, but also a certain level of respect, shit talking on set aside, that says we’re not going to cut corners, and we all know our respective roles are important”. 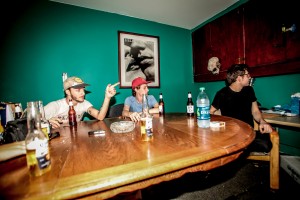 So what does the future hold for the three amigos? “We might have to sell out at some point”, Theo laughs. When I asked them if they’re getting approached more now that they have a few successful videos under their belt, they all nod, but none answer eagerly. “We still just want to do shit that’s tight”, says David. They all laugh, and play it off as a joke, but as they quiet down you can tell they’re deadly serious. They’ve turned down a few offers, purely because it’s not what they’re looking for right now. Nevertheless, I’m almost positive after this interview that whatever they do next, it’s going to better than the last, because that’s currently the course they’re running. Towards the end, I have them all on record making their first declaration that they are indeed going to make their first feature length. If this is what the future holds, boy am I stoked.