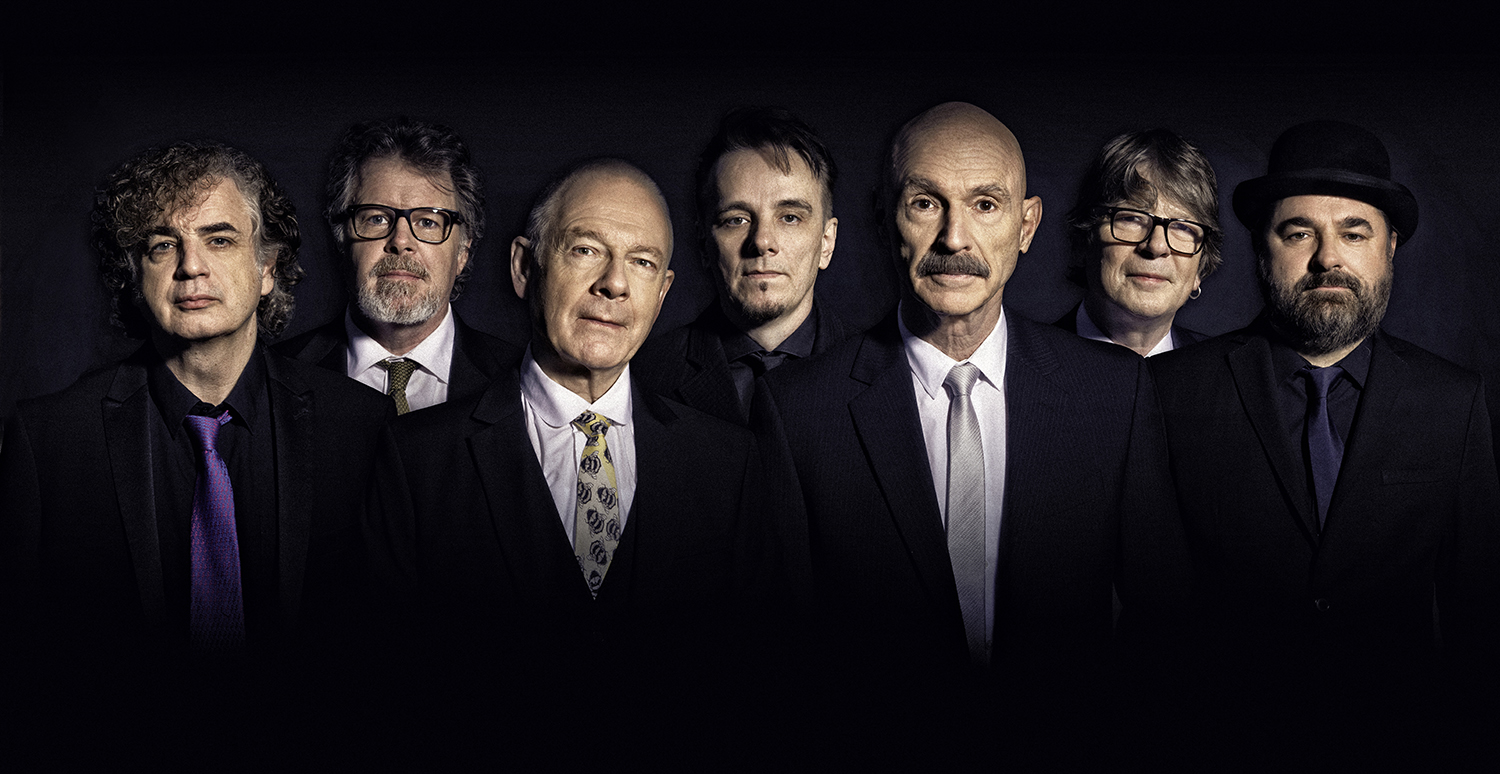 For an outsider looking in to Los Angeles’ music scene, psychedelic rock is of the utmost importance in this underground, cultural moment. Here and now, there are many bands that ought to come to mind as the root inspirations to artists like King Gizzard and the Lizard Wizard, OSEES or Kikagaku Moyo. You could think The Doors or Velvet Underground, and you’d be right but if you turn back the hand of time even further and cross the pond, you’d pay witness to the first true frontiersman of musical exploration, King Crimson. They stand out as the progenitors of the sonic and lyrical landscapes that pervade Los Angeles’ scene till this very day. Some fans and even musicians today might not be aware of the connection, they might just naively rock out to Fuzz’s cover of “21st Century Schizoid Man” thinking it’s an original, but those in the know not only recognize the debt they owe to King Crimson, they carry their awe with them on stage anytime they play guitar and try to breach the same headspace as Robert Fripp. 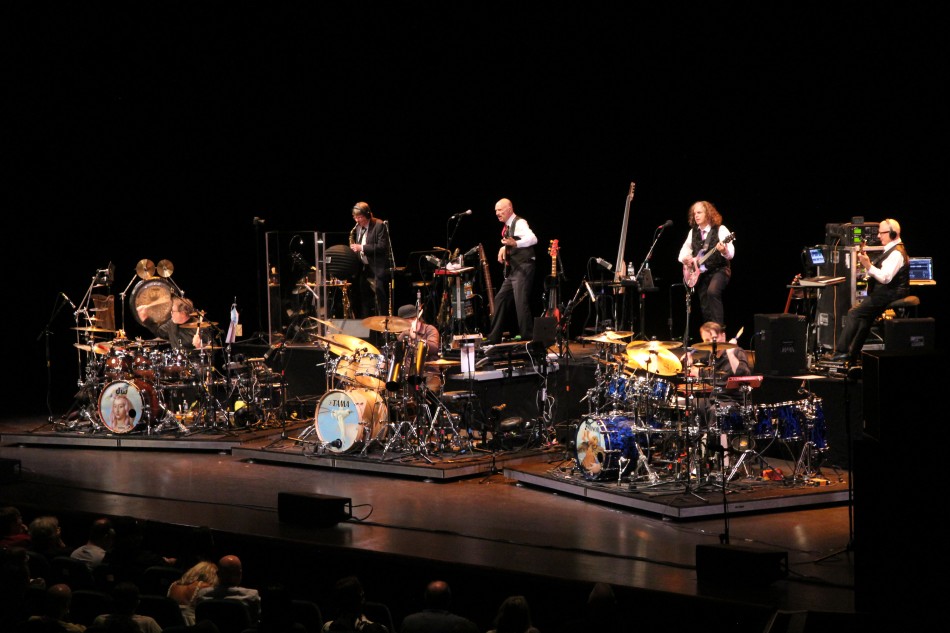 There are a few tenants to the King Crimson musical philosophy, that act as bedrock for modern psychedelic music, the most important being that original sounds and instrumentation make for more transformative music than familiar ones. King Crimson then uses these foreign sounds to help audiences travel to foreign places the band constructs with even note and lyric until an audience member finds themselves somewhere beyond their own imagination.

King Crimson reviews usually tread the same critical waters, writers pour their hearts out talking about the band’s musicianship and virtuosity. However, in many circles, this comes across as boring. What every person should be able to understand is that King Crimson creates worlds from their imagination that very few can understand. The music and lyrics craft these worlds to every last detail and so it’s my opinion that it is their imagination, not their musicianship that makes King Crimson so iconic and lasting. These songs can make you feel like you’re treading through sand in a hot, lonely desert or sleeping in an alien futurist palace. Robert Fripp’s imagination is equal parts Alice in Wonderland as Dune but translated into music.

With all these thoughts motivating me to seeing King Crimson, I was dead-set on crossing them off my concert bucket list at Los Angeles’ Greek Theatre. Whereas most prog rock concerts draw a certain demographic of fans, this show brought out everyone from Los Angeles. The band’s legendary status preceded them and anyone with a modest knowledge of rock knew this was the perfect show to take the edge off. One fan that couldn’t help but make me smile was wearing a white lab coat with the eternal question, “King Crimson Not in the Hall of Fame!!??”.

The first band of the evening was the California Guitar Trio, three virtuosic players performing acoustic early Floyd songs like “Echoes”, immediately transporting us through a passage of light, color, and sound. Following them was The Zappa Band, an amazing cover band that brought the uniqueness, humor, and swagger of Frank Zappa’s music back to life.

With three drum sets sitting in the foreground of the stage, I caught a whiff of the sort of deviousness Robert Fripp had in store for us with this ensemble and tour. As every player took their places, the band began with a thunderous drum assault from all three. This then transitioned into “Pictures of a City”, a bombastic tune with just as much jazz swagger as sweeping rock and roll vigor. A very fitting tune to begin their Los Angeles show with, it made me feel like a glossy eyed LA transplant experiencing their first night in the big, buzzing city. You can close your eyes and listen to this song and see in your mind’s eye exactly where King Gizzard and the Lizard Wizard got their chops. 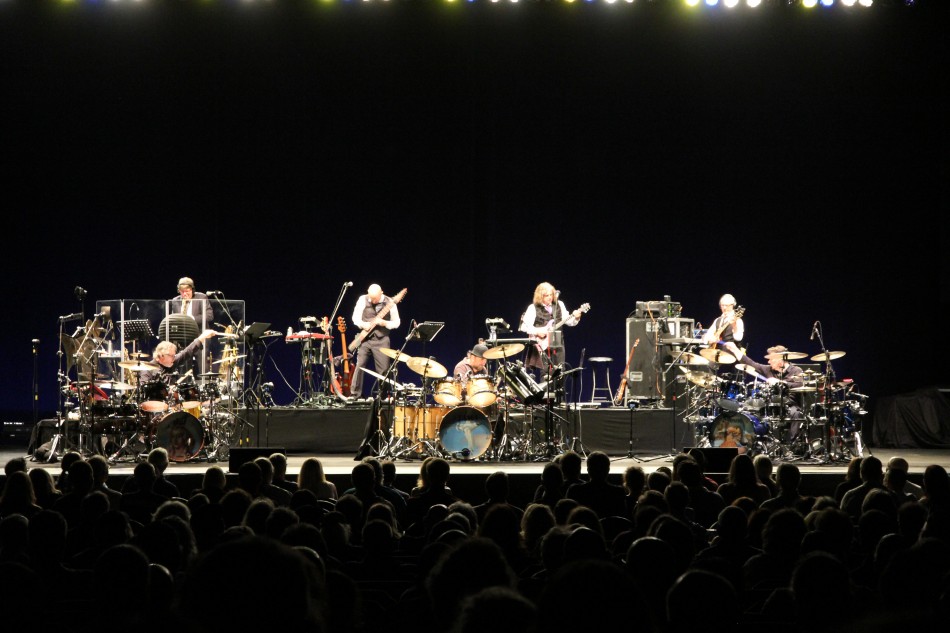 Next, the band went into “Epitaph” one of their more solemn and anticipated tunes off their groundbreaking 1969 album, In The Court Of The Crimson King. It’s a prog ballad seemingly inspired by a tale of such epic magnitude it can’t be novelized. The song is infused with reverence and revelry, featuring epic climaxes where each instrument clashes and bursts with tear-jerking emotion.

The set that night featured twists and turns through their catalogue, yet all the pieces seemed perfectly fit together in this present incarnation of the band. Not a single shred of nostalgia was left to be desired. The night ended with their most iconic trip, “21st Century Schizoid Man”. With distorted vocals, dystopian lyrics, and dangerous instrumentation, the band tapped into something much deeper than English rock, progressive music, or science fiction with this song. They were knitting with the same genius threads you find in art as essential as Orwell’s 1984 but they somehow concentrated it into a heavy, almost proto-punk prog rock jam. Every element on the psych rock periodic table can be reduced to this song.

If 2021 was a movie, at some point “21st Century Schizoid Man” would play over a montage. I don’t know exactly how King Crimson were able to be so prophetic, perhaps man’s trajectory was obvious back then, seeing what sort of effect media has on the human mind. Now, as the world falls into some kind of mass psychosis, double-thinking so often we might as well be hearing voices, one might think we’re destined for catastrophe. Even if that were true, I know exactly what band I’m putting on my headphones when everything goes haywire. King Crimson. They’ll give me some sense of understanding  and fun no matter the circumstance.