Los Angeles is a mecca for DIY events, especially in the Summer and this past Saturday Penniback Records and Dirty Laundry TV teamed up to put on hybrid “Dirty Penni Fest”, at you guessed it, The a Echo and The Echoplex. Teenagers would get nine hours of freedom and independence with headlining acts such as Cherry Glazerr, No Parents, and Guantanamo Baywatch. But it wasn’t just the youths who were permitted to have a good time… Mike Watt and the Missing Men were also on the bill. Whaaaaaat?! When I was first asked to cover it, I honestly approached my editor with great hesitancy in agreeing to spend an entire day drenched in 18-year-old sweat. Most of the aversion I have with these type of events is a bi-product of me getting older, music festivals increasing popularity and my progressively shortened temper to be around nihilistic teens. Alas, I agreed to it anyhow, and holy shit I am glad I did.

Though there were some incredible bands that kicked off the shenanigans at noon, I knew if I had arrived early, by the time the headlining acts were to go on I would be too exhausted to care or too drunk to remember, so around 2:30 I made my way down the piss-drenched stairs off Glendale Blvd. towards the Echoplex. I was greeted by a group of adolescents that looked like they were still celebrating Coachella, with their healed boots and long capes.  You know the kids  just slammed an 18 pack behind CVS after asking a homeless man to buy it for them. I braced myself for what was to come.

2:30pm is still a relatively early time slot, but for The Lovely Bad Things, people were willing to commit – and as they should because they fucking killed it. There were just enough bodies to the point where it didn’t feel awkward, but intimate enough that you could still enjoy feeling hygienic. Conveniently the AC was blasting front and center of the stage, and like moths to a light, everyone gravitated towards it. The quartet covered Dinosaur Jr.’s “The Wagon” and both the band and the crowd gave it their all, which is impressive effort for one of the first acts of the day. 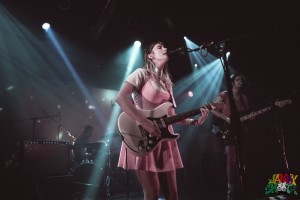 Taking the stage next was Winter, who certainly helped us beat the heat with their smiling faces and all around cheerful disposition. Samira Winter sang her heart out about her cat named Zoey, while bassist David Yorr jumped around grinning cheek to cheek. They’re songs are the beginning of a relationship – they are the smiles, the laughs, the good intent, the rainbows and butterflies and sunshine and unicorns. Perhaps this is why there was an abundance of overly affectionate youths who were practically glued to each other’s hips…or other parts…scandalous!

I had gone into this with a (relatively) negative attitude, but soon found something oddly refreshing about the amount of excitement these younguns had for seeing their favorite artists. Their enthusiastic demeanor had yet to be diluted by the realities of hangovers and work in the morning. In attempt to reach this same level of euphoria, I headed backstage to a world of free beer and good vibes, (aside from when a Sloppy Jane band member got a bit too sloppy at the end of the night and tried to fight my friend) and I admittedly spent a decent amount of time there.

By the time Guantanamo Baywatch took the main stage at 5:30pm the festival atmosphere was in full effect. Four beers later, I stepped out to what was seemingly a crowd that had doubled in numbers. The kids were ready to come out and play and the bands were ready to give ‘em hell. 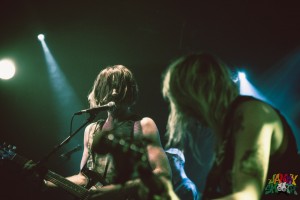 There has been so much hype around Guantanamo Baywatch and with damn good reason. They’re the kind of band whose music belongs in the rolling credits of a Tarantino film, the part where Netflix and chill enters full chill mode and the good vibrations are effluent.  Most of their songs contain minimal vocals, but they’re talent radiates through their craft, with their buoyant guitar riffs and bass-driven melodies. When they are singing on tracks,such as “Darling… it’s too late”, their harmonies are so sharp, even your 80-year-old grandpa would happily become a Guantanamo Baywatch convert. Frontman of No Parents, Zoe Reign launched himself onto the crowd during their set, which consequently, only upped the ante. An inspired boy who looked no more than 100 pounds, stood onstage and gave a sign of the horns gesture before fearlessly jumping into the crowd. I once crowd surfed at a 30 person STARFKR show, and 18 year old me felt cool. In retrospect, I was such a fucking loser compared to these audacious adolecents.

Over on The Echo stage was Death Hymn Number 9. They are certainly no strangers to Janky Smooth, and I’ve obviously been living under a rock as I’ve never seen them live. Upon entering the room I immediately noticed intimidating looking dudes on stage replete with painted faces and messy hair – I had no idea what I was getting myself into. 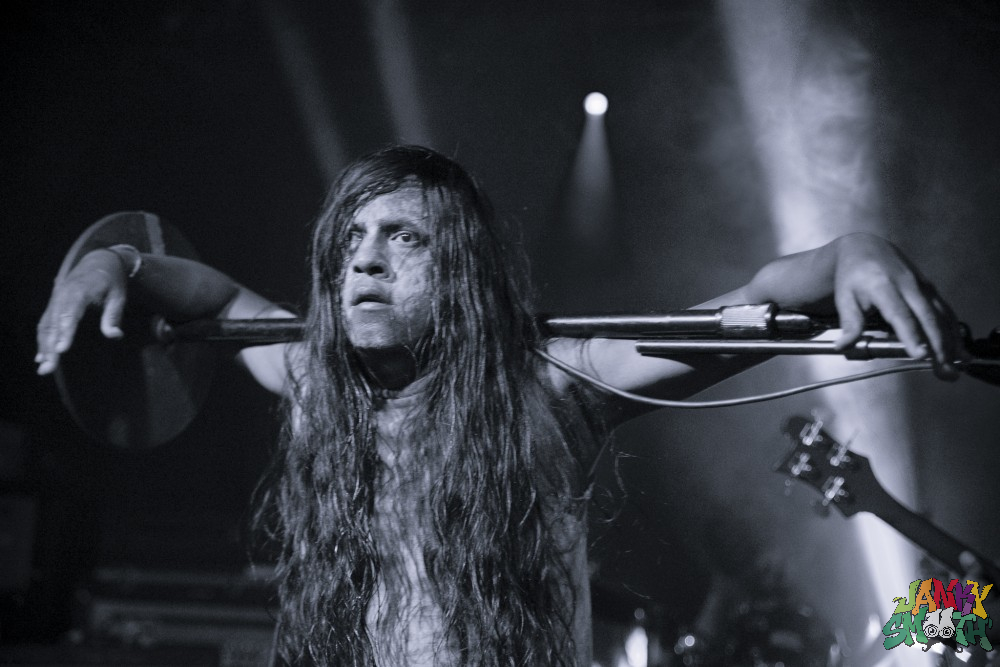 “There are all kinds of colors in here. Why can’t the rest of the United States do that. Maybe we should just put on one big ass show” exclaimed frontman Paul Gonzalez right before a circle pit ensued.

The aggressive drumming rapidly kicked in and with spastic exuberance, Gonzalez looked like a fish out of water, flailing his arms and legs all over while crooning into the mic. While Gonzalez was spreading a message of peace and love, there were kids running around pushing one another. Ironically, this was what was necessary TO keep the peace. They were expressing their angst before their parents picked them up covered in sweat and bruises.This was their theraputic way of extracting any built up bullshit that is so very prevalent in those awkward years of life.

“I mean I’m so so glad to have it now but it must feel amazing to be the weirdo teenager in high school who listens to pavement and the butthole surfers and knows they have a home to go back to every weekend.” Wesley Baxter of the Lovely Bad Things expressed to me.

I couldn’t wait to see what these kids were capable of for the headlining acts.

Walter, made up of members of Meatbodies, Ducktails, and Sadgirl took the stage next. I only got a taste of their Psych fuzz, but fortunately they will be returning to The Echo this Friday, so I highly recommend going. They’re pretty much Ty Segall’s love child and who would want to miss that?

On the Echoplex stage was No Parents. I walked in on a (surprisingly) dressed Zoe strutting around the stage screaming “Hey Grandma. Merry Christmas. I’m in a punk band.” And the kid were eating that shit up. The pit was the biggest it had been all day. In true punk fashion, most of their songs didn’t exceed three minutes and they hit you with a sense of urgency. We were the Mia Wallace and they were the adrenaline shot. 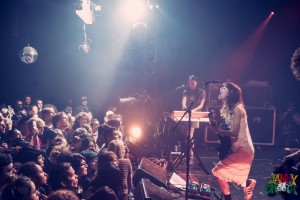 Cherry Glazerr and Mike Watt and the missing men were playing simultaneously. There was a huge crowd of slaves to the glaze in the Echoplex. The beautiful vocals strewn from Clementine Creevy on songs such as ‘Trick or Treat Dancefloor’ and ‘I Had Ten Dollaz’. There was a nice choice of covers songs when they performed Nirvanas “Territorial Pissings’ which the crowd went ape shit for. Not sure if I was just going to the wrong shows in High School but this weekend made me think that my generation had a void of female fronted bands.There weren’t many girls shamelessly screaming into a mic with guitar in hand, adorned in a pretty dress. These teens have someone like Creevy to look up to. To be inspired by and a seeming endless string of suffragettes

In The Echo, Mike Watt and the Missing Men were playing, and there was a surprisingly small crowd. This was when it was evident most of the people at the event were born in the late 90s (or even 2000s which is still really fucking weird to think about). He is the low end maestro of legendary acts such as Minute Men and Firehose, among many others. Why there wasn’t a larger crowd was beyond me, but it made for a much more intimate atmosphere. Norton Wisdom stood to the left of the stage performing mode paintings of lions, naked women, and some of the band members. Nearing the age of 60, and he still sounded as great as ever. 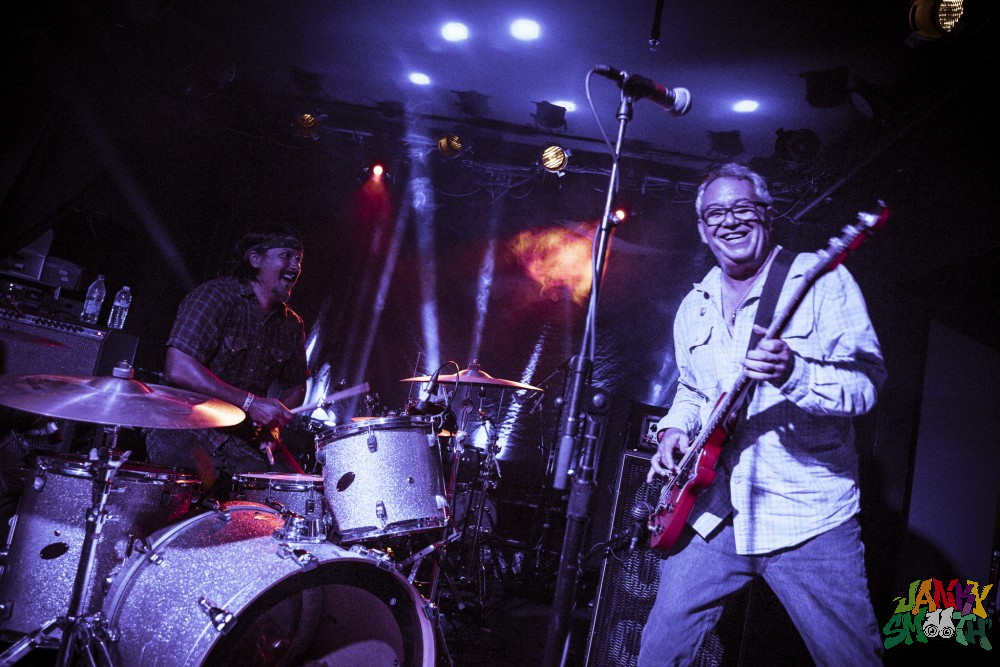 Mike Watt and the Missingmen

Recapping on the show, Baxter and I were chatting about how lucky these kids have it “Nowadays things like burger, lollipop, moonblock, penniback, dirty laundry, provide just incredible shows and experiences that I would have loved to have had when I was a teenager.”

We live in an era of the internet where there is unlimited access to find out about these shows, and put into the mix that most of these teens live in the area where there is an abundance of new bands to be discovered.

Baxter continued “I mean I’m so so glad to have it now but it must feel amazing to be the weirdo teenager in high school who listens to pavement and the butthole surfers and knows they have a home to go back to every weekend.”

So whether you’re 14, 26, or 60 I think it’s safe to say we all found ‘home’ this past weekend. Through the remnants of nostalgia with multiple cover songs, I couldn’t help but hope that someday these humans may just be shouting out “Hey Grandma. Merry Christmas. I’m in a punk band” in ode to one of their favorite artists as a teen. So let’s keep the DIY scene alive. These kids are our future.