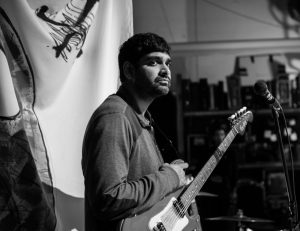 We don’t really know much about who Raj Sabhlok is or where he came from but when we were sent the opportunity to premiere the first song in a series of 100, most of which were recorded in a recording studio owned by John Vanderslice.  When we heard “No Suicide”, we were in.  If you’re a fan of The Growlers, Kevin Morby and Devendra Banhart, you should love Raj and the 100’s.  Let us know what you think!

We all process loss differently; self-imposed isolation, submitting to one’s vices or even complete disassociation are not uncommon coping methods particularly in the early stages of grieving. Raj Sabhlok instead sought solace through the creation of Raj and the 100’s, a project which came about following the sudden passing of his parents. He traded the comfort of his home for and RV and spent two years traveling the United States, reflecting, exploring internally and exploring the vast wilderness along the way.

For the duration of the his musical pilgrimage, Raj composed an impressive collection of about 300 songs. Eventually his journey landed him at Tiny Telephone, the San Francisco-based analog recording studios owned by songwriter/producer John Vanderslice. Vanderslice has recorded with a barrage of successful indie rock artists including Death Cab For Cutie, with whom Raj and the 100’s share stylistic similarities and a penchant for extraordinary songwriting ability. Accompanied by Jamie Riotto on bass/background vocals, Robert Shelton on piano/keys and Jason Slota playing percussion, Raj recorded 50 of those 300 songs in just 10 days. In doing so, the collective decided to challenge themselves to record twice that number of songs in 20 days. Undoubtedly ambitious yet achievable through the commitment of the artists and diligence of the production staff. ‘No Suicide’ was number 97 out of the 100 tracks recorded in the arduous 20-day stretch. “I had this idea of writing a no suicide note, hence the title” Raj says in reference to his initial incentive to write the track. It’s dark, melodic and sweetly somber. Reminiscent of the inner turmoil inflicted by an agonizing loss, it is an indisputably choice selection as an album single. ‘No Suicide’ is truly representative of the album’s thematic components and demonstrative of Raj’s ability as a songwriter.

“Why wait?/Go ahead and do it already/I think it could be alright” asks Raj, delivering  his own vulnerability orchestrated beautifully into soulful psychedelic sentiments.

Anyone who has experienced loss can relate to the vast array of emotion delivered by ‘No Suicide’. The album is partially available to stream or purchase on the Raj and the 100’s bandcamp page beside a quote from Vanderslice  hailing Raj as “a one in a million songwriter”.

The 100 track album titled One of the Oldest Men to Ever Live will debut April 14th on Cosmic Dreamer Records and it plays beautifully from beginning to end. Poetic lyricism, immaculate production quality collide with passionate instrumentals with the tangible sincerity that pays tribute to the album’s inspiration.