A lot of the bands we were listening to in high school are just now hitting their 10-20 year anniversary on their hit albums. There has been a resurgence of bands that many left for dead- but isn’t that the case for almost all popular art?  This weekend was a major festival (When We Were Young) who’s entire line up consisted of people I thought were dead or working at Starbucks. The one comeback (although to be honest they may have never left) I was super stoked for was the night before this shit show of a festival, HORSE the Band at Union Night Club. 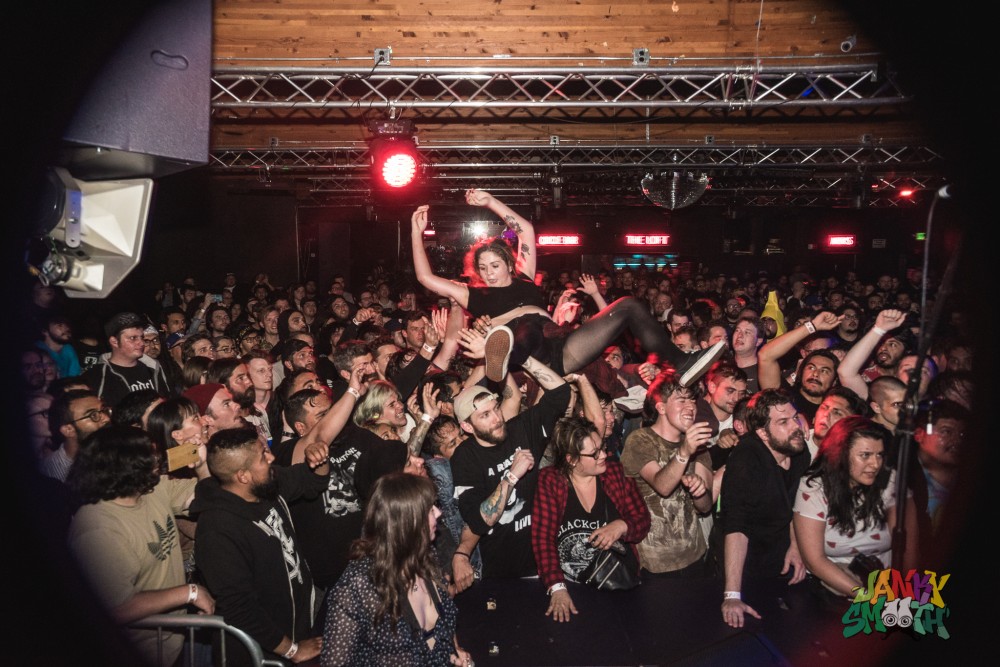 HORSE the band- a wild ride at Union nightclub 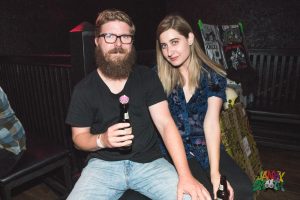 Upon arriving, I instantly ran into Nathan Winneke, singer of HORSE the Band, just hanging out, drinking beers at the merch table, talking with fans and hanging out with his wife. I got the chance to chat with him for a bit before the first band. We somehow got on the topic of Fartbarf playing the show.  Nathan told me that apparently, for the last 3 years people have been telling him to book Fartbarf and finally it just happened to work out. We talked about their sound and masks a bit which then took us on to talking about Devo.  Nathan appreciates Devo as much as I do. If you were wondering what Nathan’s favorite Devo album is, it’s Greatest Misses- I know its not what I was expecting either. I parted ways with Nathan and moved onto some booze and music.

The first two opening bands of the night were some grind core sounding bands that I wasn’t too interested in other than the fact that the bands had some intriguing band members.

The first band was CTCN, which is pronounced some way that is not C-T-C-N, but I refuse to pronounce it any other way because that is how they chose to spell it. CTCN consisted of Daniel Pouliot on drums, who also just so happens to drum for HORSE the Band. That alone blew my mind, drumming is exhausting and to play with two metal-ish bands is just plain impressive. 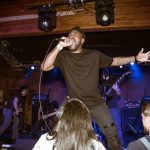 The next band, Graf Orlock, held my attention a little more. Don’t get me wrong both bands were great I just don’t have a long attention span for that stuff anymore. Graf Orlock caught my eye when I noticed that their guitarist was wearing a Death Hymn Number 9 shirt. After chatting with him in the smoking area I realized it was Jason Schmidt the one time bass player for Death Hymn. 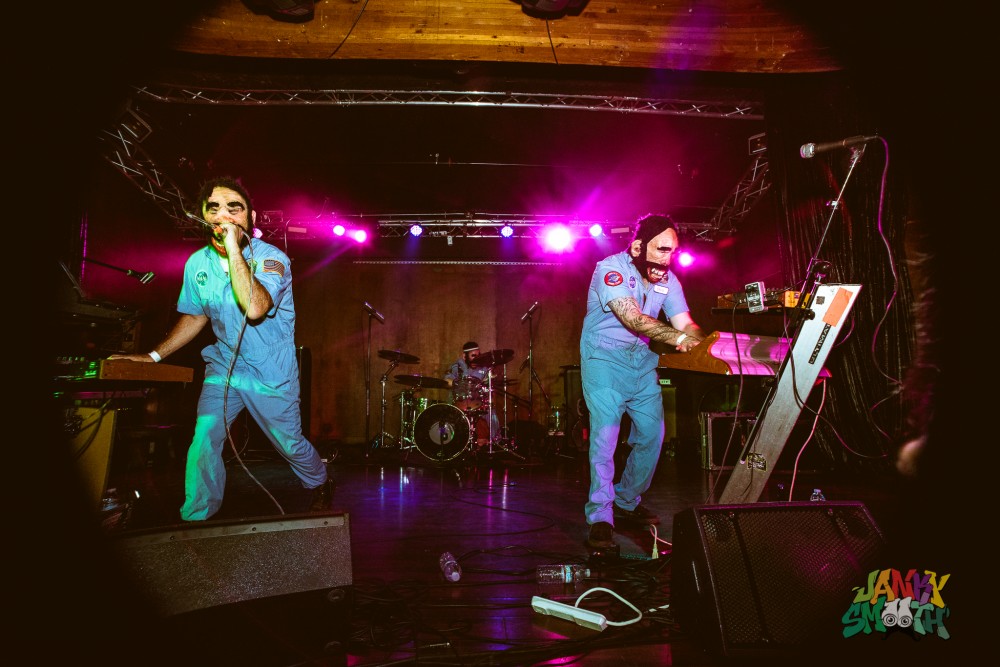 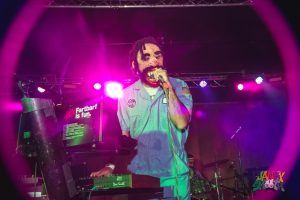 I felt the winds shift.  The show was about to get nuts. The room was packed to the brim and Fartbarf was about to take the stage. I had had quite a few Jameson’s at this point and was ready to groove. Fartbarf is well known in the South Bay where I grew up and they often would frequent our local watering hole “Gasser Lounge”, which has since closed down. These guys dress up in old neanderthal style mongoloid masks and play spacey dance music. Fun fact about their masks.  Ages ago, I was talking to the band and they told me their original masks they purchased from some vintage costume store were apparently made with led paint and started making them sick. They have since recreated the masks minus the led paint. If you ask me led poisoning just makes things more interesting. Sell-outs.

Fartbarf concluded their set with an encore of Nirvana’s song Breed. It blows my mind how far a band with the name Fartbarf has gotten- far enough that they are getting asked to play encores. I really hope they hit the main stream eye so everyone will one day be chanting: 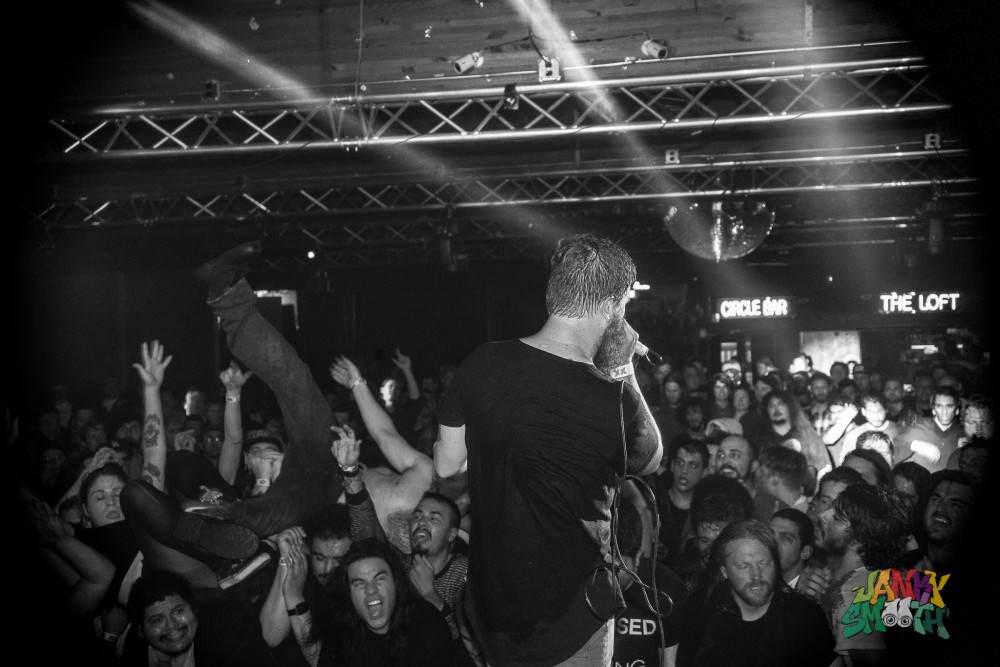 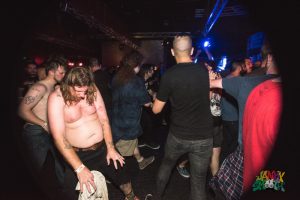 I had fought my way to the front of the stage for HORSE the band. As soon as I get to my final destination, the guy I pushed past turns and says “you know you’re probably going to get hit right?” I usually expect to get hit shooting in the crowd but for some reason this sounded like a total threat. HORSE took the stage and as soon as the music started, without delay, I was getting punched in the back and side. I think I made it about half way through the first song before I was being pushed under the sea of people. I was literally drowning in dude sweat and elbows.

It took me a good amount of time to fight my way out of the crowd but eventually I surfaced. With a weekend of festival shooting ahead of me, I figured it would be safer to pace myself and shoot from the sides and the stage.

They played all my favorite songs from “Birdo” to “Cutsman” to “Bunnies” and even “Sex Raptor”! I was in nerdy nostalgia heaven. They were flawless in the way that they played and Nathan hasn’t lost a step in his banter with the crowd- maybe even too good. 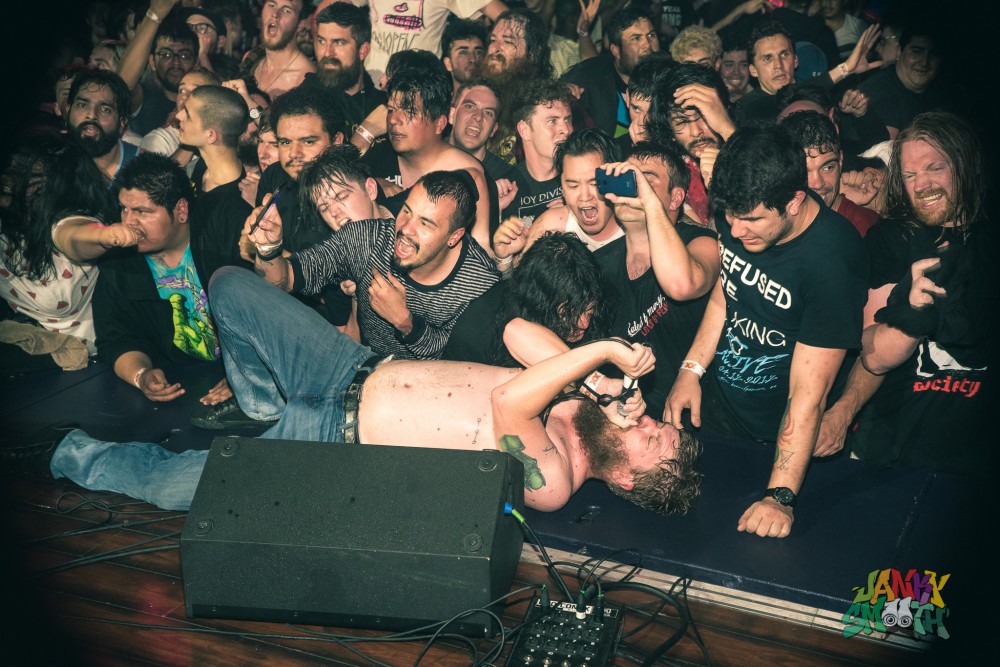 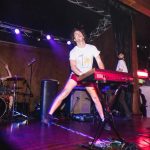 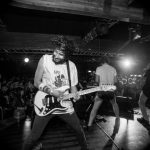 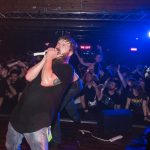 At one point some one shouted “Shut up and play more music!”

Nathan just laughed and responded with “You clearly don’t know who you came to see, this is the show. Erik’s (synth player) parents are in the crowd, he never wants this fucking moment to end!” 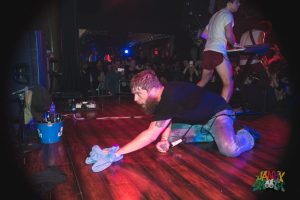 I could not stop laughing. Most of their set is a haze due to Jameson and getting punched in the back of the head but I do remember a lot of beer drinking from the band on stage and Nathan crawling around a lot. There was also that moment when Nathan sung with 2 hats and 2 shoes stacked on his head. Or that moment Erik wrapped a towel around some random girl in the crowds head.

Oh yeah Nathan also took his shirt off… so there’s that. 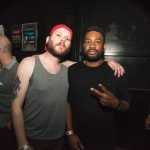 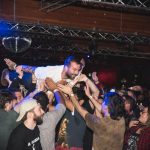 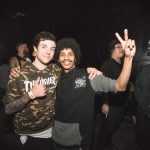 HORSE the band fans from all across the country 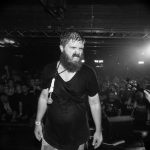 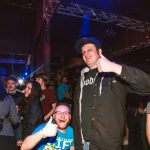 Rob “the giant” Shepyer at Union 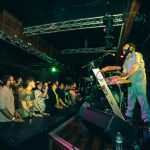