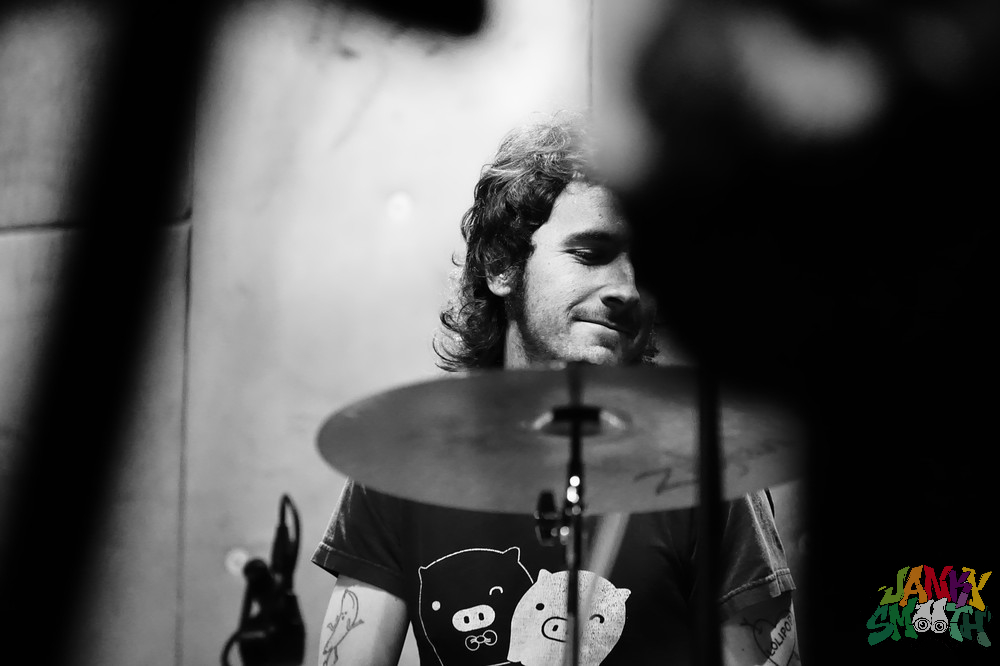 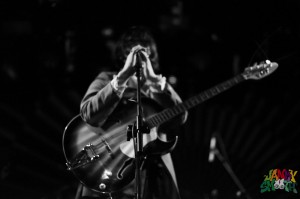 Creation Factory at Lolipop Your Heart Out shot by Mitch Livingston

Ever have sex with someone and after about ten minutes in you realize both parties are only continuing the sexual activity purely based on the hope that the other person might find slight enjoyment out of it? Realistically, you both want to just high five and call it a good attempt but you go through the motions in hopes that one of you MIGHT climax? Yeah, that’s sort of how Lolipop Your Heart Out went at The Teragram Ballroom. I’m still unsure as to whether the energy and outcome was so low due to the 5pm start time- primetime to still be recovering from Friday nights hangover. Or perhaps it was because the entrance price was $26, which can be a lot for a starving artist who’s living in a city that is gentrifying and going up in rental price at an absurdly rapid rate. Maybe it could’ve even been because the One Oh freakin’ One was closed on a Saturday afternoon (I call shenanigans!). Whatever the reason for the small crowd, it was mildly disappointing to see such a small turn out for what should’ve been an epic evening brought to you by Lolipop Records.

Janky Smooth did a series of year end lists, and I was stoked that I would get the chance to see three bands that had made it onto my list (Part Time, Corners, and Mystic Braves) all together under one roof. My excitement hastily diminished as soon as I reached the ticket box and was informed my name was not on the media list. As I stood in bewilderment, I attempted to contact my editor and make some shit happen, as I could hear the ever so gentle vocals of Samira Winter (of Samira’s infinite summer) slowly culminate from inside the venue. In the ten minutes of frantically pulling up emails on my phone to prove that I was, in fact, on the list, I couldn’t help but notice every person that entered told ticket sales they were on the list as well. I couldn’t decipher whether I was at some elitist party where you had to know someone to get in, or whether there were actually a few fanboys out there who genuinely wanted to see these bands, and were willing to pay for it. After my editor had to unnecessarily re-email the venue, I was finally let in. 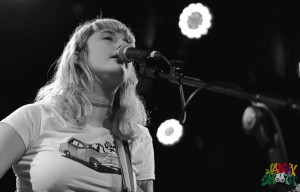 Being a huge fan of Winter, I was gutted when I got into the venue to catch the last literally five seconds of Samira’s Infinite Summer. I had already abolished the idea of catching Beach Bums (who I intend on most definitely catching at some point, and I suggest you do too) as soon as I discovered the horrendous parking situation outside the venue. But I was genuinely disgruntled at the fact that I missed Samira due to a lack of communication and organization at the front. As I peered around the dimly lit room, I noticed there was a tremendous age gap in attendees. There were the cool dads with their cool kids who got into good music at a young age, there were the tweens that got dropped off by mom and would be picked up by 9 and no later, there seemed to be a few supportive parents of the band members, and then there were, of course, those like me, just trying to catch some bands at yet another mini-fest in Los Angeles. I ordered myself a beer, as I do, and anticipated the long musical journey ahead of me (as I approach my later 20’s seven hours of music, is in fact, a journey).

Six guys who looked like they had just stepped out of a time machine entered the stage. Adorned in suits, fringes, and hair cuts to match, The Creation Factory had the aesthetic that was so synonymous with their sound. A hallucinatory black and white lines lit up their backdrop as they eased our ears into a slow, funky, psychedelic state. Their tantalizing guitar riffs sped up and were accompanied with surf rock vocals. The tambourine and the keys enriched the 60s vibe, and the smell of weed so appropriately filled the air. This sextet (thanks Creation Factory for allowing me to FINALLY use this term) most definitely set the bar high for the rest of the bands to come. Some of which contained common members of The Creation Factory. 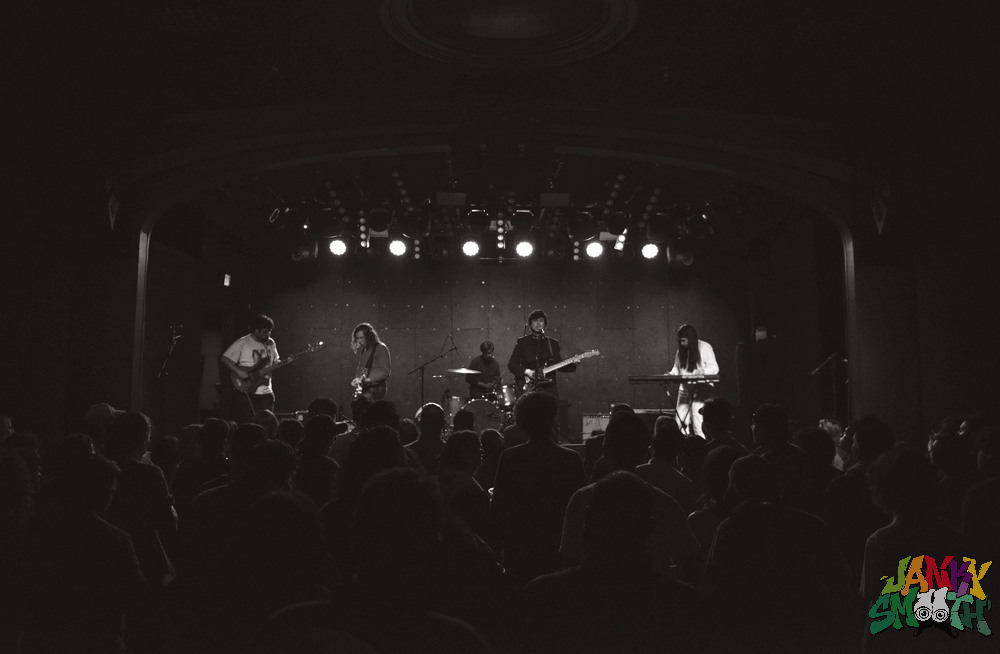 Up next was Billy Changer, a group I had never seen live, but have always loved. A group of average looking 20 something year olds, with fluorescent blue lights piercing their forms, captivated the audience with rhythmic bass lines and shots of warm feedback. Their tracks could easily suit a soundtrack to any uplifting 90s movie, with rock and roll guitar riffs sandwiched between airy reverb. Leave it to Billy Changer to make lyrics like “sit on my face” seem romantic. 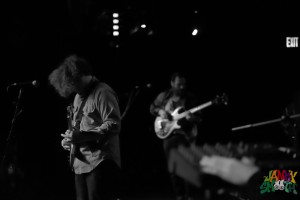 Psychomagic were up next and I was entirely unfamiliar with them prior to the show. As this eclectic quartet began playing, I was slightly confused as to what genre they were. They had elements of KROQ dad rock but also murdered the game with a majority of songs that seemed to have a heavy punk influence, and just as I thought I had somewhat of an idea of what the fuck I was listening to, they played some surf rocky, psychedelic sounding song. I’m pretty confident the same manatees that plop out idea balls for Family Guy episodes (ode to epic south park episode) also plopped out genres of music for Pyschomagic. But you know what? They fucking pulled it off brilliantly. They transitioned each song with a melodious glue, despite their tracks being undoubtedly divergent from one another. 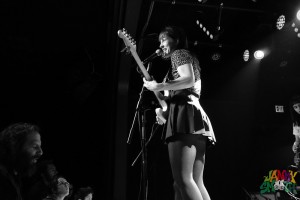 Being the eavesdropper that I am, I noticed majority of the crowd bantering about how they came just to see Peach Kelli Pop. I was only briefly familiar with the band, but based on everyone’s anticipation of seeing them, I became overwhelmingly excited to watch yet another all-girl band do their thang. Their 90s inspired outfits and vivacious dance moves could make anyone want to relive their high school years and become best friends with these girls. With their high energy, and their gleaming pop tracks, watching Peach Kelli Pop was like watching the real life Josie and the Pussycats – a band every girl born in the 80s/90s could only dream of being in. 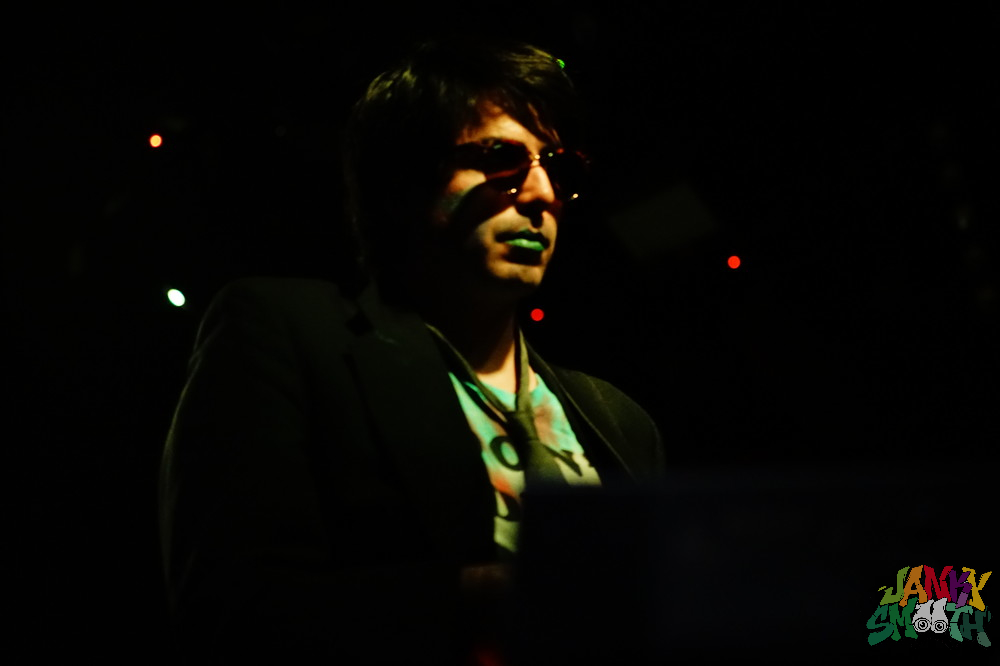 Part Time shot by Robert Anderson at Lolipop Your Heart Out

I was surprisingly sober, and at this point all the tweens had been picked up by mom out front. Finally, the last three and most personally anticipated bands were to come on! It was party time! Though the crowd became evidently smaller, the energy seemed to have shifted when PART TIME took the stage. Singer, David Loca so casually, yet craftfully snapped his right finger in his see through shirt as though he was Morrissey himself. With their constant colossal rolls hid behind their craft, their performance went beyond just another band pumping out nu-wave dance tunes. Their lo-fi tracks invoked shoulder rolls in the audience, and for the first time, it felt as though I was at a mini-fest put on by a prominent record label. The drinks became stiff, and my body became limb, as I pretended to be at an 80s nightclub with Loca’s vocals so sweetly crooning. 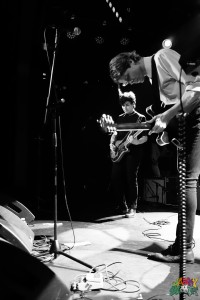 Corners shot by Robert Anderson at Lolipop Your Heart Out

Such a transition was appropriate as Corners were up next. Every time I have seen Corners live, singer, Tracy Bryant offers a connection to those willing to allow music to take over. Somehow they managed to make the audiences ennui a little more bearable with their nu-wave, garage rock tunes. Being one of the first bands to emanate from lollipop records, it is no surprise that their performance is nothing but sharp and precise. Enervated by booze, the crowd began swaying figure eights with their hips, as they performed one of their most popular tracks “Maxed out on distractions”. Another prime performance by Corners.

The liveliness of the room was ephemeral as attendees seemingly disbursed after Corners set. I couldn’t help but wonder why a headlining band would soon have to come on stage and play to an audience of 30 people…especially given how rad Mystic Braves are. Exhaustion was evident as mystic braves took the stage. Given that a few band members already previously performed and had to stick around hours to later immerse us again with their talent, their lackadaisical demeanor was pardoned. By all means, they most certainly could have been feeding off of the the audiences vibe replete with absolute no enthusiasm, but it was slightly disappointing as Mystic Braves are one of the best psychedelic acid-trip, fuzz bands currently around. There was even a point in which the effete guitarist took off his strap as though to suggest the set was done. I think they were ready to head to Monty Bar next door, for a well deserved drink, after a long long day. 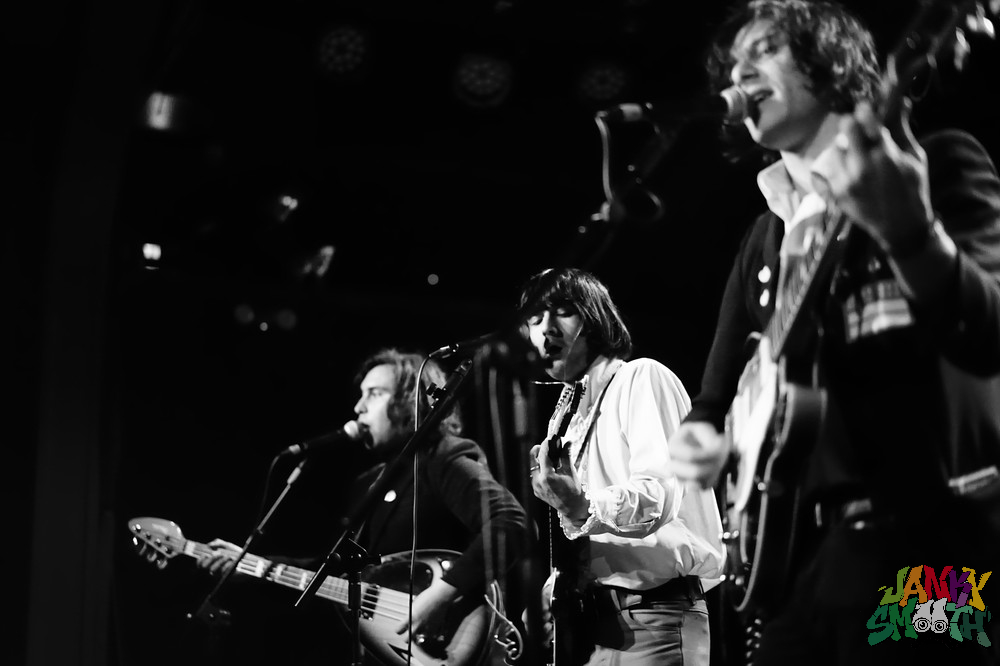 Mystic Braves at Lolipop Your Heart out shot by Robert Anderson

Though there were high hopes given the lineup, unfortunately, this mini-fest may get lost in the ether of just another mini-fest put on in LA. The lack of organization at the front seemed to have affected more people than just me, which perhaps may have contributed to the low energy of the room.

“They didn’t believe I was the drummer” Mindee of Peach Kelli Pop explained to me after the show, “it was so stressful, I had to go on in five minutes, and they wouldn’t believe I was actually performing. It was such poor planning”.

We’ve all had those nights that didn’t live up to our expectations, but it was still a good time nonetheless. Like Sex and Pizza; even when they’re bad, they’re still pretty good.  These mini-fests aren’t always going to be a success, but that doesn’t mean the bands are any less talented because of it, and Lolipop most certainly will continue to prosper. But sometimes, just like that one time you had sex with that person who is generally BOMB, but just wasn’t on their A-game, you’ve got to give em a high-five and say “I’m sure next time will be better bud”.