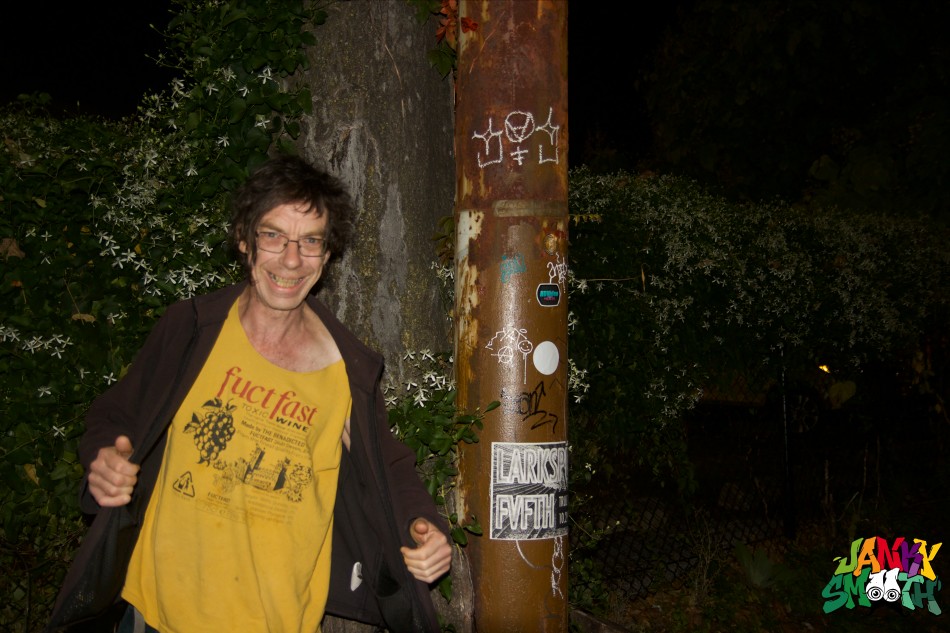 On one of my recent punk rock pilgrimages, I was able to connect with SUBHUMANS / CITIZEN FISH / CULTURE SHOCK  singer and Renaissance man Dick Lucas, and he was gracious or gullible enough to make time for an interview before his gig at the legendary OTTOBAR in Baltimore, Maryland. When I say Renaissance man, it’s no exaggeration: Dick is a musician, runs a record label, writes poetry, paints, hosted punk interviews  on BluurgTV and has a unique passion that we share (that I sadly forgot to bring up in the interview)–he is a very accomplished balancer of objects, rocks mostly. He is much better than me. You can see some of Dick’s paintings and balancing pieces on his Instagram. 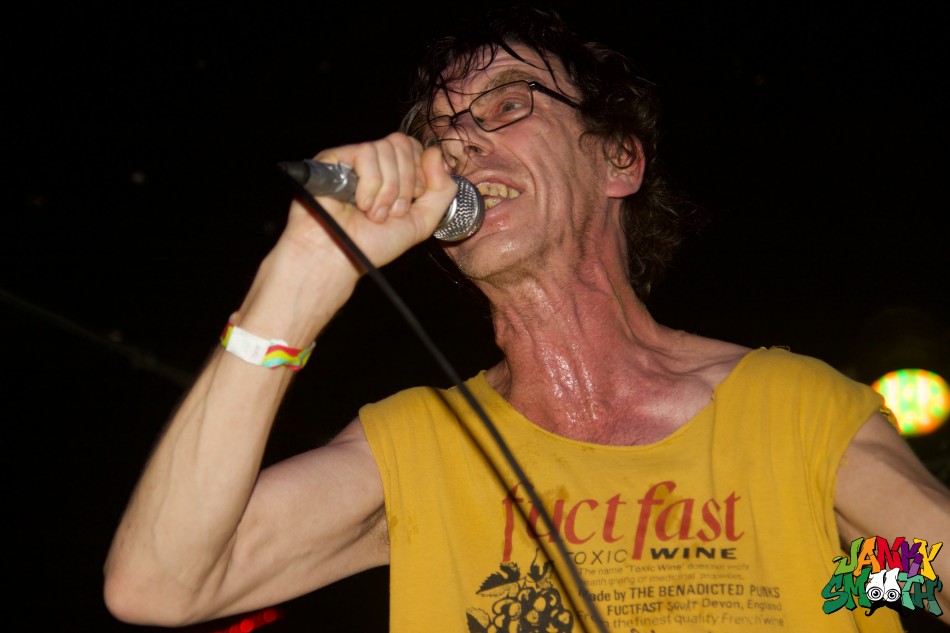 DS: So first question: Bluurg TV- are you still doing that?

DICK LUCAS: It’s on permanent hold- it matched in with the lockdown situation in the UK. Coincident to that my partner Michelle and I sort of started it up, she got working with Rockaway Park who are nearby to us–they’re a unique venue, basically a very large communal living space: they do live shows, have a vegan cafe, they grow their own food, they’ve got a printer of t-shirts, people doing iron and metal work building things out of scrap and just housing people for a nominal rent–that sort of thing. It’s communal living in the best way it possibly could be, totally DIY and Michelle works on their behalf sort of doing online stuff promoting what they do. She just doesn’t have the time and basically once lockdown ended, far fewer bands were sending us stuff to put out on Bluurg TV.  The input was not coming in and we almost ran out of friends to ask for material

DS: From what I watched, I really enjoyed it. You have a real gift for it.

DICK LUCAS: Well, thank you–it’s permanently there to be watched. A lot of it is timeless, being punk rock.

DS: I really love your paintings. Can we talk about that a little? What inspired you to start? How do you pick your subject matter?

DICK LUCAS: I started painting just to see how it went in the mid 90’s as I was never very good at it when I was a kid. Thought I would sort of give it another go and I just love doing it. Then someone told me about Instagram and I thought–ok, that’s  a good place to put me paintings because people can see ‘em. Because Instagram is far more based on visuals and that is what paintings are. I have never joined Facebook; I tried Myspace and it was just stupid. Spending all day having people you don’t know asking how you are– I was bored shitless telling people I don’t know how I am. This social media stuff is far over-praised. It could be good, just like television could be good, but it is all misused and there is more dumbing down than enlightenment that takes place.

This–three-dimensional thing is how it was and how it fucking should be.  Painting-wise, my favorite subject is the sea. I do like the sea, just trying to capture the movement, a sort of fairly realistic picture of how it looks. With most things, having to be accurate with people’s faces and stuff, it’s very difficult to get. With the sea and rocks and stuff, you can add a bit of surrealism in there and just go a bit offkey and do it in different colors than it should be. And it is a great way to relax and get away from the madness of the world.

DS: So Baltimore…is this your first time here?

DICK LUCAS: Oh no, we’ve been here several times. It’s  a really good venue: they’ve got a fantastic PA and the crowd is always good.

DS: Have you seen any of the city?

DICK LUCAS: No, it’s the same as most cities we tour. We go to the venue and do sound check and hang out a bit, then by the time it’s done it is too late and everything is closed. We’ve been everywhere and seen nothing.

DS: Back to my list. Did I see you making out with the girl from Tiger Sex on the Internet?

DICK LUCAS: NO, NO! (shaking head emphatically) That is not what you saw! She walks up and says great show, fantastic, can we take a photo. She has got her arm around me neck like that, they take the photo then she pulls me head toward her head and CLICK. It looks like we are making out and we are not.

DS: Yeah, I thought that was a little weird. I am glad I can be the one to clear that up.

DICK LUCAS: Yes thank you, you are not the only person who thought that was a little weird.

[Interviewer’s Note: If you’ve ever seen Tiger Sex or met Kelly Tiger Sex Chalston, you would know there’s a chance she might grab you around the neck and pull your faces together.]

DS: What was the last gift you gave or received that you enjoyed?

DICK LUCAS: (thinking for a moment) Oh– I gave Oscar to the punk rock museum that is being built in Vegas. Oscar is a small red plastic squeaky fish that appears squeaking on the start of “Walls of Silence”– he’s been sitting on the window sill staring out for decades.

DS: What do you think of this whole punk resurgence? It seems like the SUBHUMANS are more popular now than you’ve ever been.

DS: You’ve got any new bands you’re listening to? Do you know the Viagra Boys, Amyl and the Sniffers, Bob Vylan?

DS: We’re almost done–what is in your pockets?

DICK LUCAS: In my pockets? My hand.

DICK LUCAS: In these pockets, yes. I’ve got lots of pockets: in this one I have me phone obviously.

DICK LUCAS: It’s ah very smart it kind of needs to be. Some SUBHUMANS stickers I have always got at least three of these I got me tobacco and a lighter and some lockets which are like throat lozenges cause I’ve been coughing so much. Sorry, nothing too interesting.Good question though.

DS: Weed: do you smoke weed or no?

DICK LUCAS: I do at home, yes.

DS: So you are in favor of legalization?

DICK LUCAS: Yes-well, you see, New York has gone one better, they’ve decriminalized it. I‘ll point out the difference: once you legalize it, people start stacking on taxes and shit but if you decriminalize it, you can just buy it from the same people you always have and not get arrested so it’s much better that way.

DS: Do you have a favorite joke or can you tell me a joke?

DICK LUCAS: How long does it take a pig? (Interviewer: I don’t know how long?) About a weeeeeeeeeeek. 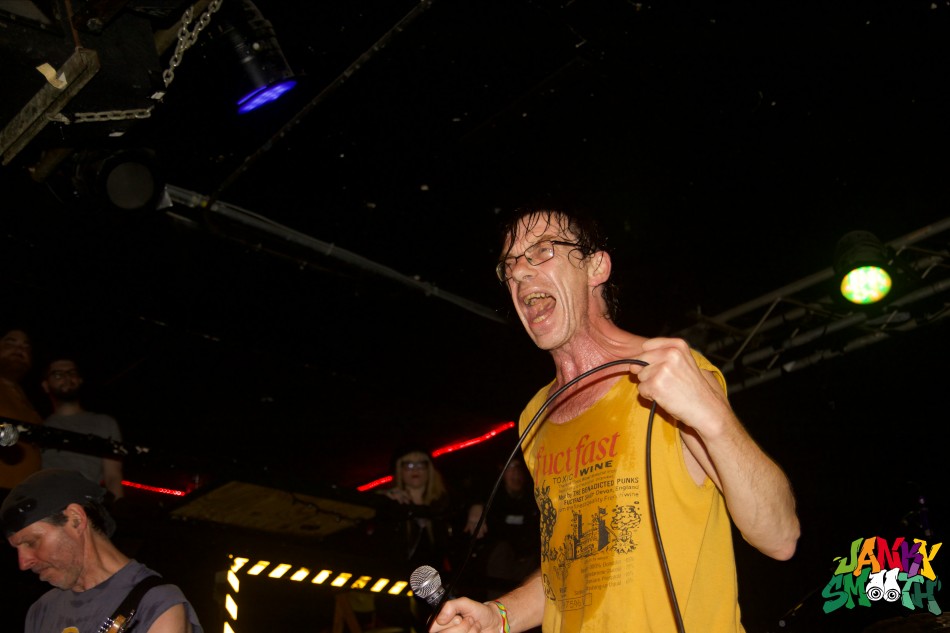 And with that, we concluded our interview. I of course stayed for the show and will make the review short and sweet as this shit is probably too long already and attention spans are short.

All TORN UP from New York are tour mates with SUBHUMANS on the East Coast, a hardcore anti-fascist punk band. They gave a high-energy, sweaty set that had the crowd moving and they taught us a little Spanish so we could sing along to their song “We Are All Illegal”. They were the perfect opener for the SUBHUMANS.

But I have to say that PEARL, a local act to Baltimore who had the dreaded opening spot, blew me away with their own brand of female-fronted hardcore. Frontwoman Sienna Mahoney took command of that room and the band belted out a set that reminded me of perhaps the Bad Brains or maybe Keith-era Black Flag– that same sort of pissed-off hunger to just make music no matter if they are listening or not. Make them pay attention or get the hell out and she did just that. This is the kind of band that gives me faith in the future of punk rock.

Let’s just say the SUBHUMANS utterly killed it. Dick and the boys took to the stage and within two seconds into the first song, the stuffed venue erupted in movement. Dick is truly a magical performer: he’s able to break down that barrier between artist and audience, bring you into his mind, and let you know it’s not wrong to scream in frustration with whatever is bringing you down–and the songs remind you that you have the power to change them. The SUBHUMANS always put on an unforgettable show.