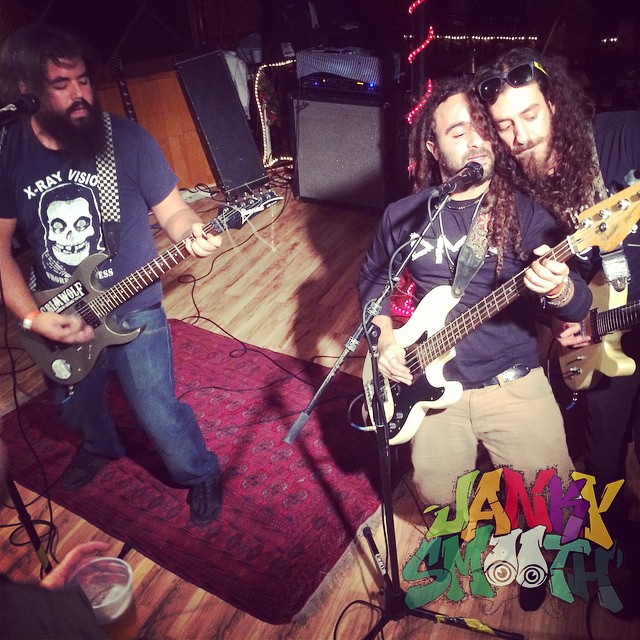 Last night, at the 13th Frame Lounge in La Habra, a bunch of weirdos got together for the Punk n Bowl Benefit Show to raise money for HBIC (Help for Brain Injured Children). There is so much low hanging fruit in jokes I could make to draw parallels between the cause we were all supporting on this night and the seeming similarities it shares with the patrons of this shindig, that it almost isn’t fair to poor, brain injured children around the world.

The bill was filled with punk and hardcore bands that use shtick, comedy and props as a part of their act. Between punk cover and clown costume clad band, The Yeastie Boys and comic book concept band, The Radioactive Chicken Heads, there were just enough twisted props and costumes to unravel and unspool the calmest of dispositions.

I could tell you I was there for the cause but that would be a lie. I’d rather donate online or by mail rather than drive to La Habra. I was there for two reasons- To see the bands Clepto and Tartar Control play.

Clepto have had quite a ride in 2014. The year started with an opening slot at Punk Rock Bowling, then straight into a European Tour and culminating into their return to the states and the shut down of their home/project at Olystis Studios off of Pico and Hauser in Los Angeles. The now defunct, Olystis Studios was not only home for the band but also a collective of artists and friends like Tartar Control and MANY others who have performed at their notorious parties such as Symbol Six and Mike Watt. After months of home hunting and couch surfing, Clepto have found a new home and are almost done with their 5th studio album that will be titled, “The Cold, Unending March of Progress”. Drummer, Philip Al-Hajj insists that this album will be heavy in concept and much less light hearted than their last release, Kebab: 100% Live Off The Grill which featured 23 songs and was over an hour in playtime. The new release will be accompanied by a 39 page comic book that depicts the band fleeing from a zombie apocalypse and returning to nature to start society anew.   You get a real bang for your buck with the band Clepto.

Seeing Clepto live is a rare experience of raw aggression, great songwriting and technical mastery of their musical instruments. It would be easy to compare them to a band like System of a Down with their Eastern European, Middle East, folk like, gypsy hardcore approach to song writing but there’s one caveat: They are much better musicians than SOAD. Their arrangements are complex and dynamic. Their songs are hilarious and thought provoking and their band chemistry is intimate and incestuous. Lead singer, Alexander Cabral could easily be a lead guitarist in any band in the world except for Clepto because Niko Chantziantoniou is a fucking 6 string freak of nature. Bass player Freddie Al-Hajj is a thrashing mad scientist of low end and brother/drummer Philip Al-Hajj must be a mathematical genius of style with the strange and pleasing time signatures and abrupt and concise changes that he navigates with ease.

Clepto took the “stage” at this bowling alley lounge/bar before The Yeastie Boys and Radioactive Chicken Heads, which I found odd but I’m not complaining. They tore through their set with the participation of the patrons that were able recite almost every lyric to every song they played. Songs like “Cry Me a River” demonstrate not only Clepto’s ability to write a complex song with different sections and tempo’s but also that songs like that are accessible to fans, even though it’s longer than 3 ½ minutes. I can’t get enough of this band.

As the evening progressed through the other bands, all who were very entertaining, I started to anticipate and grow impatient for Tartar Control to take the stage. I had never seen them live prior to tonight’s show and I was over due. I have been listening to their music the past couple years and it is hilariously hardcore. Elder Robert was outside the venue as I walked up and he started reading me scripture and speaking in tongues before we even shook hands. He seemed like a nice enough fellow, although I did sense a brewing volcano in this clean cut, man of god. Normally, devout Mormons freak me out but there was something about this guy that made me feel comfortable.

Tartar Control consists of Elder Robert on lead vocals, Elder Sean on guitar/vocals and… a Robot. The robot handles the drumming and attitude. I hear these guys are Mormon missionaries that help spread the gospel of Christ and the dangers of sodomy, smoking crack and being a stripper, amongst other taboo and uncomfortable topics. I brought up sodomy to Elder Robert outside the venue and he scurried away, red faced and shocked. I guess music is the only logical way for them to breach the important topics they cover.

The stage was set. Robot was ready. The misunderstood missionaries had smart ties on, not a hair out of place. The kids in the audience were salivating to hear the word of god. They needed it. Sinners were abound and needed to be saved and Tartar Control were up to the task. When salvation is the topic, sometimes you to need to speak to someone and sometimes, you need to speak AT someone. Shake them, wake them, beat them and bruise them. Tartar Control began their holy assault on these pathetic bastards whom most have written off as being beyond salvation.

They plowed through classic tracks like Sodomy Basket, Jesus is Love, Smoking Crack and previewed newer songs like My God’s Cock and Brush Your Teeth, off the forthcoming release, “We Forgive You”. They even have a song for young ladies who raise money for the Church by taking off their clothes and grinding into men’s erections called, “Don’t think about your dad”.

Elder Robert is a man of the people. He spent most of the show mixing with the leper like congregation with no fear for his own safety as these mixed up young men and women thrashed around in a circle and were seemingly trying to hurt each other in the name of a good time. Heathens. By the end of the show, Elder Robert had everyone sitting criss-cross apple sauce on the floor, tamed and ready to receive the word of god. Elder Sean, clearly the least disturbed of the two men kept the forum on track with satanic riffs and a more angelic type of vocal that could soothe the most savage beast among us. He clearly keeps Elder Robert and Robot in check as they veer from the path, as we all do, from time to time.

In all seriousness, Tartar Control are an amazing band. The timing between Rob and Sean is impeccable. Strip away the catchy, raunchy and blistering songs and either one of these guys can take this act on the road, even without the music. I’m not one for musical gimmicks but I am one for laughing my ass off and listening to great punk rock. Tartar Control are opening for original sinners, The Dead Kennedy’s on January 18th at the Roxy and January 16th at The Observatory along with bands like JFA, DFL and GFP. Communion will be held in the green room prior to the show. Clepto are better than you 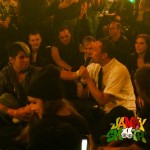