The dream of the 90’s is alive in Echo Park.

Every time I venture into the hipster-friendly, conveniently gentrified, Echo Park, I can’t help but reference this Portlandia bit. It just rings so true here. A print media zine release party, conveniently located next to a record store; the only thing missing from the night is to manifest an outright time warp into the golden decade of the 90’s was the glaring of smart phones screens, which lit up the faces that lined the dimly lit, iconic Echo, smack dab in the heart of Echo Park.

I arrived slightly after the live zine readings around 7 PM.  I was just in time for Echo Park’s own TÜLIPS to commence the musical portion of Dum Dums Zine release party, which also served as the official LA Zine Week kick off. Upon entering, I darted straight to the bar. The Echo stands as one of the only venues where you can order a beer and a slice of pizza, which is delivered from the delectable Two Boots Pizza right next door. If that isn’t enticing enough for you then your soul is black.

TÜLIPS, the self proclaimed “riotgaze” rockers lead by Taleen Kali and Angie Bloom, started off with a charmed sense of spunk. A third of the way into their set Bloom, who’s title also stretches to Dum Dum zine founder, quipped to the audience; “I just got off work, don’t mind me.” Though she was admittedly fresh off work, Bloom picked up the band with vivid stage presence and lead guitar parts reminiscent of J Mascis.

TÜLIPS had an genuine charm that resonated with their tight knit following. I couldn’t help but notice that everybody in attendance either seemed to be friends, or a friend of a friend. At one point Kali jubilantly pointed out that she had made a zine with nearly everybody in the crowd. That is a shit load of zines.

While TÜLIPS tuned their guitars mid set, Bloom broke out into in impromptu a cappella cover of the Dixie Cups “Iko Iko”, which whimsically escalated itself to be a highlight of the set. Before breaking into their alluring single, “Hotspur”, Bloom dedicated the song to “all the pretty ladies” following up with the realization; “I don’t think there are any ugly people here tonight” to which Kali facetiously chimed in; “Wait, there’s one.”

To close out the early night was the Los Angeles based four-piece, So Many Wizards. The Wizards, who are led by Nima Kazeroun, opened with their nebulous cut “Sic Boys”. So Many Wizards had an undeniably chill vibe and their tasteful blend of hazy jams and youthful ballads translated that well with the DIY or die audience. The bouncy, ethereal cut “Inner City” was met by heads bobbing in unison from the cheery crowd. So Many Wizards came across as true Echo Park vets..  Kazeroun assuredly admitted; “We played the first Dum Dum zine release five years ago, and we will still be here in another five playing the same songs, we don’t care.” Rest assured; the dream of the 90’s is alive and well. 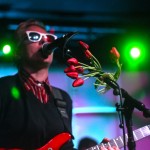