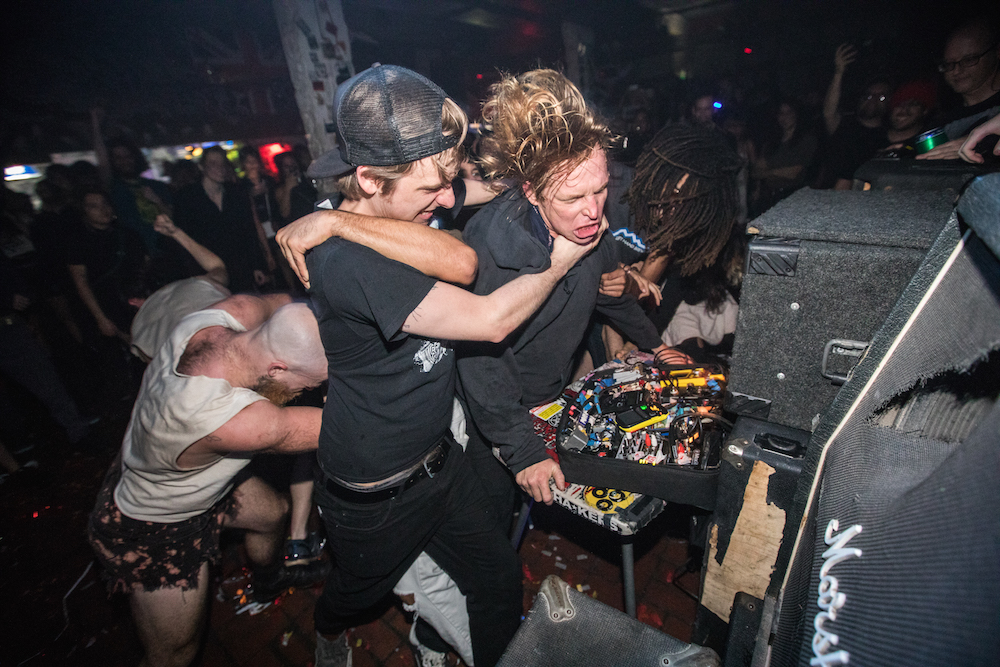 “The brainchild of Robbie Brantley (one of Miami Florida’s most prominent noise scene-freaks), HUMAN FLUID ROT is utter violence through sound. His harsh noise live sets are micro catastrophes of explosive disgust and kinetic chaos. Oftentimes lasting only a few short minutes, what you won’t get in length/duration at a HUMAN FLUID ROT show, you definitely receive in ultra condensed overstimulation of the senses. Sonically just about every frequency is represented and all at once. Stabbing and poking the inside of your brain with brutal beauty and disregard. Visually/physically, you’ll witness or participate as part of the violent mob that is invited to choke, kick and beat the man as he conducts his tangled mess of a noise board. Cathartic to say the least… 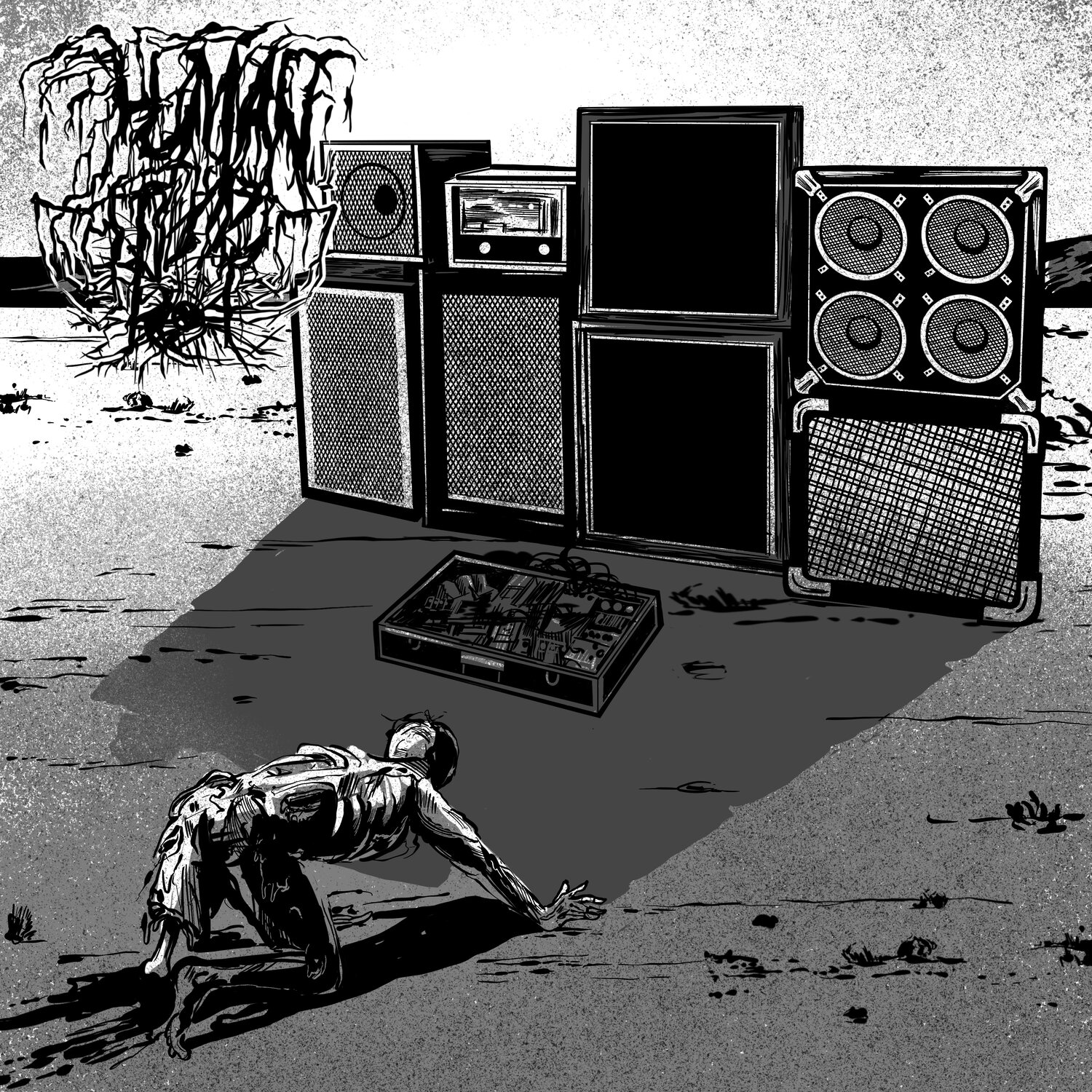 Check out the exclusive music video premiere for The Bimbo With An M-134 (directed by vidiumhq) below and read on to learn more.

Robbie has been terrorizing noise fests and the general public for the better part of the last two decades. He’s released countless cassette tapes and cd-r releases but “A SUDDEN INFLUX” marks his first proper vinyl release to date. The album is a disgusting journey into the fucked up puddle of viscera that is HUMAN FLUID ROT. The trance you’ll fall during your listening assault is imminent. A chaotic head cheese of shredded electronic innards and unfriendly bile.

A Sudden Influx [In Serendipity] is available for pre-order NOW in two limited variants over at the Sweatband Records webshop. 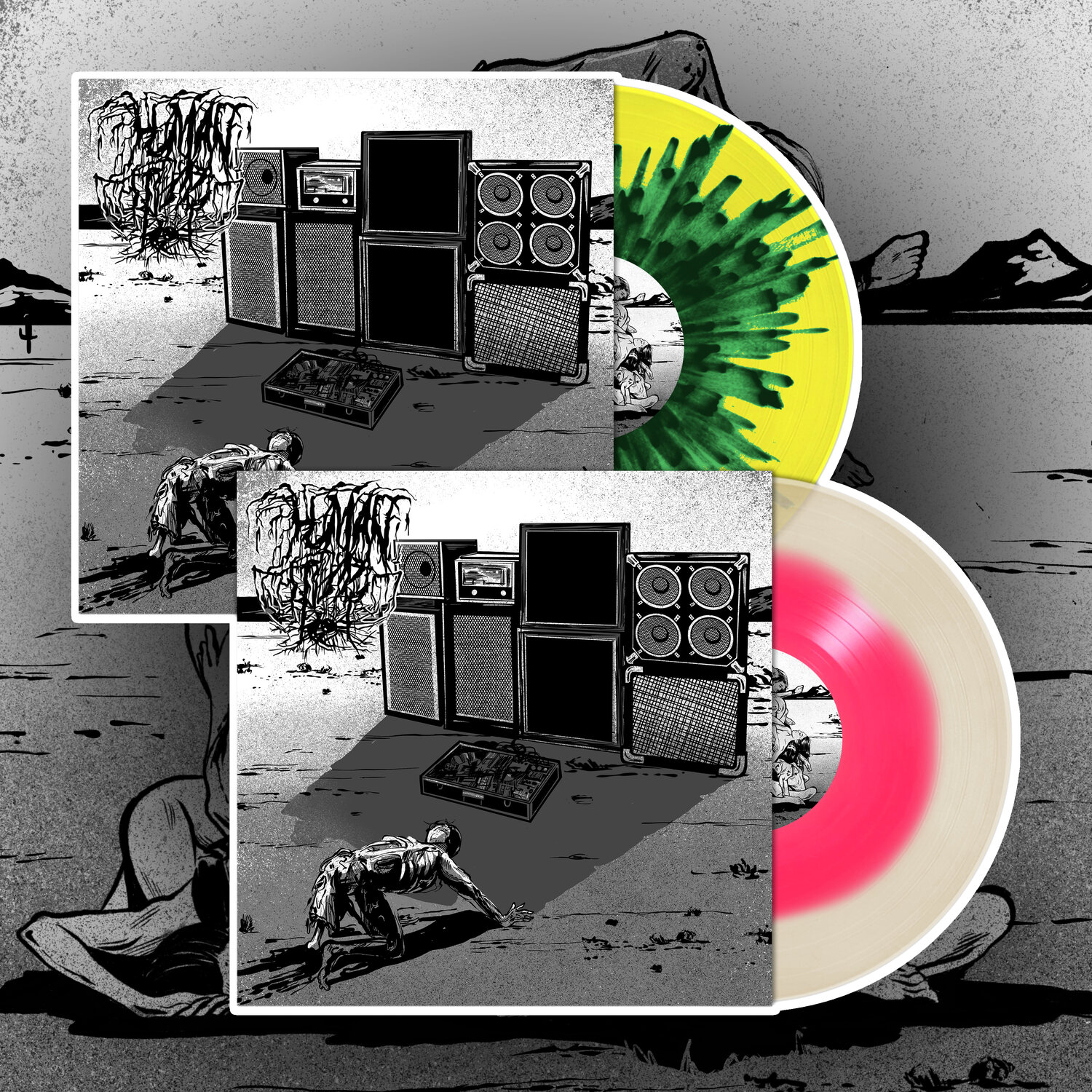 A mysterious creature named The Blue Slug [BS] recently sat down with HUMAN FLUID ROT (HFR) [AKA Robbie Brantley] to ask a few questions about the noise purveyor’s life, interests, and upcoming record A SUDDEN INFLUX (IN SERENDIPITY) due to be released by SWEATBAND RECORDS in the coming weeks. (Upon mastering for vinyl, the pressing plant told the label that in all of their time pressing records (doing 20,000 releases or so) they never encountered another release harsh enough to require a special half-time cutting technique.)

Check out Blue Slug’s interview with Human Fluid Rot below:

BS: The live shows get really intense… What’s the wildest thing ever to happen at a HUMAN FLUID ROT show?

HFR: Oh man! The list hopefully will go on! We’ve had plenty of crowd-killing, crowd surfing and so on. I’ve personally fractured four fingers in my right hand. My buddy scaled a vertical wall and hopped onto the crowd below but the most memorable is when my homie, Gladys broke her knee during a dive. I’ll never forget that.

BS: What do your parents think about what you do?

HFR: As of 2021, HumanFluidRot is 16 years of age. My parents just found out about it not more than three years ago. My mother still hasn’t ever heard it. It’s not the fact of caring. They’re more supportive now than ever.

BS: Where do you see Human Fluid Rot in 20 years from now?

HFR: I would love nothing more than to be 57+ and being pummeled relentlessly by crowds. I’ll do this forever. I love this. I love this community. I love this life I’m living.

BS: If you had 1 million dollars what would you do?

HFR: Fuck man. I don’t know. Have all the things I need and money is so temporary. I guess I’d finally open the venue I’ve always wanted. Definitely take care of my parents.

BS: How many times have you masturbated in a public place? (public restrooms included…)

BS: What’s your go to menu item at Taco Bell?

HFR: I’m actively trying to get sponsored by Arby’s. Never heard of Taco Bell? Any good?!

BS: What are you thinking about during a Human Fluid Rot live set?

HFR: Most of the time, I black out. The only thing I usually remember during sets is how relieved and relaxed I will feel afterwards. It sounds cliché but a lot of the energy and thought going into my performances is incredibly intense and they serve as a way to blow off steam… and I really love chaos but that’s different.

HFR: The spectrum is so broad. Everyone within it is doing there own thing. It’s a phenomenal, appreciative, caring and talented crew.

BS: Which is your favorite SPICE GIRL and why?

HFR: I’ve had a crush on Victoria since the reveal of the Spice Girls. You guys reading my diary?

BS: What’s your least favorite food and why?

HFR: I don’t eat fruit and I welcome your hate.

BS: It’s 40 years into the future… You’re sentenced to be eaten by crocodiles for corrupting the youth with your noise… The execution is being broadcast live. What are your final words before you are eaten?

HFR: You really think I can’t take a bunch of alligator imposters? Have you seen my shows?

HFR: Jason. You guys don’t have enough lines for this explanation. Just know that I’m right and Freddy is the wrong choice.

BS: Are you allergic to bees?

HFR: Isn’t there a children’s horror-type book series that includes a title close to this?

HFR: Corpsegrinder all the way. The last good thing Chris Barnes did was a car commercial in Tampa Florida where he talks about his Porsche and even that is questionable.