The rise of doom metal’s popularity after the 2000’s had generated numerous doom and stoner bands that have saturated the scene with a lot of the same old sounds. Some bands take doom places that aren’t even metal I’d argue, like Australia’s Divide and Dissolve. One of the second wave doom bands that were able to leave a mark on the genre and get people to reconsider the possibilities of playing slow and heavy is the United Kingdom’s Warning. Their 2006 album Watching From A Distance was the most sensitive and gut-wrenching metal I had ever heard up to that point- it was doom-poetry. Oddly, it may be the case that Warning take more influence from folk than traditional doom bands like Candlemass or Saint Vitus or even Black Sabbath. Doom is simply the musical vehicle the band needs to perform the message. Warning planned to tour Watching From A Distance in its entirety earlier in the year, with Sound And Fury promoting their first Los Angeles show in years, unfortunately for Warning, the reign of president Donald Trump plagued them with visa issues and stopped them from entering the country. My hopes of checking the band off my bucket list seemed to be dashed but luckily they announced another tour only this time, the closest show was San Francisco, which I would be traveling to if necessary. Then, at the last minute, like a guardian angel of death had been looking out for me, Warning announced a gig at Alex’s Bar in Long Beach who continuously bless weirdos like me every time they book a show like this.

Just standing outside the bar, listening to the band sound-checking “Footprints” sent chills through me. I couldn’t wait, even from the outside I sensed I was going to be bathed in riffs from head to toe. The first band to open the night was Our Place of Worship is Silence. They were a death metal band that veered into grind with guitars that packed plenty of chug and the most guttural vocal growls I had heard in a while. The band mixes up the tempo, creating thunderous, droning atmospheres when they drop down into half time but also speed up to frantic paces with rabid drums and bass.

Worm Ouroboros proved just how diverse the bill was. They were a doom-gaze three-piece with two women on guitar and bass and share vocal duties, with a dude drummer in the back. The drums were soft and deliberate behind heavy, gaze guitars and lush vocals with plenty of reverb that sounded like pure heaven whenever they would harmonize. The Body was the main support for Warning on this tour. They’re a band people either love, hate, or don’t understand at all. People call what they do “harsh-noise” or “post-metal” and even I have trouble understanding how a sound as abrasive and off-putting as they create has garnered as much fandom as they have, but fuck it, why not? They performed as a four-piece but are really a two-man brain-child by guitarist/vocalist Chip King and drummer/programmer Lee Bufford. With Chip on 6 strings and Lee on drums, they employed the talents of a female singer and keyboardist, as well as a guy manning the electronic components and together, the lot created quite the crazy racket. Sounding like a cat being used to kill a baby, the band builds a wall of noise that is pierced through by Chip’s distant screeching or hallowed, angelic female vocals. The band is somehow able to soothe you in moments, even covering Chris Isaak’s “Wicked Game” at the end of their set. 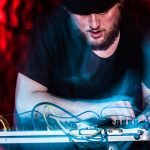 And finally, the moment I had been waiting for all year had come along, the moment that was well worth a drive to Long Beach.

Warning played their seminal album from start to finish, beginning with “Watching From A Distance” and from then on, the mood was set. This room full of leather clad metal heads were shed of all their defenses and before this band, we were all quite proud of our vulnerability. Patrick Walker’s vocal cadence and delivery are unique to all of metal and with them he recites the epic poem which is the album that has many stanzas which are the songs. I can honestly not think of any other artist that so closely touches upon the nuances of love. Everything from finding yourself in someone to losing yourself after the love has gone, while every detail in between is described so poetically by this band. In my attempt to hoard musical moments and get some grand understanding of what artists are capable of when given a stage, Warning bore out a space that is just for themselves and it shines through the darkness like a candle in heart of the darkest soul.

related content: Chelsea Wolfe: She-God Of Luciferian Witches And Other Soul Harvesters At The Regent

I think the best way to end this article is simply to share the album’s lyrics without breaking each paragraph up with the song titles as if it were just one larger piece, in the hope you will read them as a single epic poem.

Sometimes when I watch you, you seem like the same person that I once knew.
And watch from a distance, but never able to do more than I ever would.
Looking at you, I find again I am starving in your mystery.
So far away and some kind of helplessness.
And then I remember that I know you love me, I know you do.
Sometimes when I listen to your fearless voice, it’s the voice I once heard.
I want to know you and understand you more than I fear I do.
To keep the wonder, the moment you seem like a stranger to my heart and me.
And all at once, in an instant I see you perfected again.
Though you never change, please remember when you ever think of me.

I am not feeling the green burning flame, as I gaze back along footprints you have made.
I am not dreaming of more than you have shown. You’re not a foundation, you are not a stone.
But I’m afraid of the way that I’m feeling; afraid of this new understanding now;
Afraid for the beauty within me, and that which I hold within my hand.
And this is the ultimate secret, that many before me have ever known.
So capture me while I am weakest; I want to know, I want to know.
Here I am wide open, surrendering to your side. I have laid down my armour,
I have no sword at my side. I leave behind me the ruins of the fortress I swore to defend;
I leave behind me foundations; I’ll leave you a man I’ll need you to mend.
And through all the battles around me I never believed I would fight.
Yet here I stand, a broken soldier, shivering and naked, in your winter light.

I think of mornings we might spend if I came home to find you there.
Both talking freely of ourselves, or sleeping through the break of day.
And so much honesty, that’s why I never feel the pain.
And in my weakest moments I often look that way again.
I think of evenings we might spend if you stayed home to find me there.
Reaching across a distance with all the hurt that’s in our lives.
And if it came to be I would not understand the pain.
And in my darkest moments, I want to feel that way again.
And I know that I’m wrong, I know that I’m wrong.
Both casting shadows, there’s a light that shines on.
But when I look into your eyes, I know I’ll find it there.
So I don’t understand the pain I thought was never there.
And when I see you smile, I know there’s something stronger yet
than any dream I ever placed at someone’s feet.