There is something filthy growing and developing in the city of Los Angeles. Amongst all the PC, progressive, sensitive and compassionate artists and musicians, there is a misogynistic, self destructive, self promoting beast of rock and roll forming. In recent years, amongst all the amazing indie rock acts that vary between psych and garage punk, there is a thick layer of sensitivity acting as a buffer and protecting the youth against it’s rough edges. With a large share of NorCal guitar heroes trying to escape the tech gentrification of the Bay Area, underground icons like Ty Segall and John Dwyer have relocated their base of operations to the slightly less prohibitive cost of living in L.A. With their intense, yet sensitive aesthetics, their vibe is a completely non offensive one. All the past imagery of the rock and roll lifestyle, which included the objectification of women and an unapologetic personal excess have all but disappeared from the rock and roll narrative. Enter, The Shrine. The LA born trio of rockers led by Josh Landau draw on the rejected modalities of rock music and Americana as hot, trampy women gyrate on stage to guitar riffs that conjure Slayer more than they conjures the Stones. They are the true future of guitar music. As abrasive as it appears and is, it’s inclusive. Anyone can come hang out as long their delicate sensibilities promise not to be offended. The Shrine Get Nasty at The Chun shot by Taylor Wong

It’s the new mutation of Rock and Roll that has genetically infused the punk, thrash metal and 80’s glam elements that have become infused in the very DNA of American Rock Music, just as much as the blues is. The Shrine do it better than anyone.  Yes, their aesthetic is 70’s biker gang on Acid but the music is big galloping riffs and huge kick drum, crash cymbal hits emphasizing each bar of music as Landau puts a melodic yet manly vocal on top of this face melting music that surprisingly, has become accessible to the mainstream. When thrash and speed metal were happening, it was not a mainstream endeavor that was embraced by the general population. No one really liked us long hairs. The mainstream of America didn’t even know who Lemmy was back then as they now toast to his memory alongside the likes of David Bowie. Yet now we have Kardashians wearing Slayer shirts.  Fuck off. 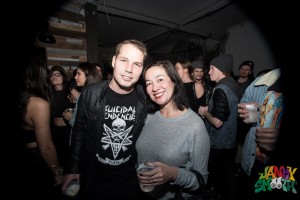 Shepard Fairey in Attendance for The Shrine Record Release

This party at an artist/”biker” compound on the outskirts of Downtown L.A. called The Chun was the official record release party for The Shrine’s new album, “Rare Breed”. Just as thrash has become accepted, as evidenced by the diverse amount of beautiful people in attendance to see The Shrine on this evening, being “a biker” has become more acceptable as well. It has become more about restoring and collecting vintage motorcycles than it is about creating a crystal meth distribution network using violence and intimidation to make your rivals fear you. The amount of long hairs in patched up jean and leather jackets in attendance on this night was overwhelming and inspirational. All the pain and anger which drove heavy metal to become more intense and all the subject matter, such as Satan, that we used to push the lames of society further away from us, created an aesthetic that has become a fashion choice for so many. Josh Landau was born of all that. Forged in the fire of Venice California, you can hear just as much Excel, Beowulf and Suicidal Tendencies in the music of The Shrine as you can hear Creedence and Skynard. You might be just as likely to see Josh riding a skate deck as a hog.  All these things make him the perfect rock and roll mutt to represent all the many ways rock music has evolved in the decades since Nirvana mutated punk into the mainstream of pop music. Prior to Nirvana exploding into pop music, the mainstream was saturated with the likes of Poison, Warrant and Motley Crue. All of this can be heard in the sound created by The Shrine. And who better to have produced the new Rare Breed album than Dave Jerden? His catalog represents exactly the type of mongrel rock that I’m trying to describe. It was the perfect setting for The Shrine and their record release party. Josh Landau took the stage looking like a Vietnam vet fresh from the battlefield and into a “love in”. Bass player, Court Murphy and drummer, Jeff Murray had the look of your everyday thrash kids and they were all business. The Shrine unleashed Rare Breed on us and it was everything I wanted it to be. Brash. Hardcore. Angry. Technically sound. The garage revival has brought the simplicity back to music which is important to inspiring new generations into understanding that YES, they can do this too. But with the Shrine, the inevitable progression of becoming more technical on your instrument is embodied in every track. With more complex runs in licks embedded into the Rockin Out At The Chun with The Shrine

simple chords that serve as the foundation of each song, the bravado and machismo of man that conquered the Earth and the animal kingdom was on full display in the tightness and complexity of some of their arrangements.. Song after song offered me exactly what I was craving as some of the more glamorous attendees of this LA party recoiled from the intensity and decided to mingle outside amongst the socially elite, while the real aficionados of rock that were in attendance pushed to the front and engaged in the sweaty, chaotic soup that began churning into a slam pit as soon as the Shrine took the stage. Go Go girls twisted their bodies and anatomy to the beat and laid their sex on top of the music. One of the dancers included Alice McMunn aka Malice- a staple and sex symbol in the Los Angeles rock music scene for quite some time, Malice seemed reenergized by The Shrine and this burgeoning scene that has embraced all the politically incorrect rock stereotypes that have become more rare in our sanitized culture. The Shrine blasted through tracks from Rare Breed such as “Death to Invaders” and “Coming Down Quick”. The highlight of the night was the inevitable tribute to Lemmy Kilmister whom Landau described as “Our Brother and Our Father”. Everyone received an incredible surprise when sax player, Nik Turner of Hawkwind took the stage and the band broke out into the Hawkwind classic, Motorhead. Nik Turner’s sax sounded perfect in the mix and the song included what seemed like a 10 minute sax solo at the end of the tribute. It really was magikal. Landau gave tribute to the audience of beautiful mongrels that came out to the show by describing us as “Beautiful, homeless, spoiled, jobless poor kids and rich kids” and I’ve never heard anyone describe the LA scene more perfectly. Through the muck and the mire of the flowery, over produced product being packaged by the music industry over the past decade, a new movement has emerged from garages all over this country. Even as an army of middle aged ex hipsters settle down and procreate the next generation of American Automatons, they have picked up the torch left burning by countless generations in accusing the emerging generation of abandoning rock and roll and all it has stood for. They circulate their memes which compare previous icons in music with today’s pop artists with Freddy Mercury pitted against Beyonce or Kanye West matched up with Jimi Hendrix in the most apples to oranges comparisons ever made in the history of graceless aging. To be fair, It’s hard to blame our predecessors for this gross mischaracterization of the state of rock music. Unlike previous generations of curmudgeons, there is no set establishment that makes finding great new music easy for those who aren’t completely submerged in the current affairs of independent music. Even with the crown resting firmly atop the head of Ty Segall, 99% of Americans have never even heard of the king or his massive catalog of music. The vehicle that has driven new, exciting and dangerous music to the doorsteps of out of touch suburbanites has completely broken down. It is this setting that makes the genius of The Shrine and their music possible at all. Without trying to please anyone but themselves and the true music lover, a pure product emerges amongst all the music created for the lowest common denominator. It is an incredible time for Rock music and The Shrine are leading the charge by unleashing the entirety of rock history into the contents of their latest album, Rare Breed.