The Coathangers at Burgerama 4 shot by Taylor Wong

The first time I saw The Coathangers was at Burgerama in March. Some bands just stand out and you know when you see them for the first time, that you’ll be seeing a lot more of them. Thursday night at Los Globos was the second to last stop on the current leg of their tour with the Birth Defects. L.A. promoter, Blundertown added Feels to the bill. All three bands were in prime form. The Coathangers at Riot Fest Chicago 2015 shot by Jesse Fox

I was able to catch up with The Coathangers at Riot Fest in Chicago. They were the first band that played on Day 1 and we spoke to Crook Kid and Minnie Coathanger just after their set.   I got a little tongue tied and at the time, I blamed it on the lack of notes and not enough preparation but after saying hello to them just before their set last night, I realized that I get a little tongue tied around bad ass women who can play the fuck out of their instruments and write kick ass songs. I tried to relay some information and ended up coming off like a total dick!!! It’s true. I’m a male groupie but since I don’t put out so I’m even bad at being a groupie. FML.

Hailing from Atlanta, The Coathangers have spent a lot of time in L.A. between recording their album and playing gigs out here. Like so many bands, they either move here or make it their second home. Jason Finazzo of the Birth Defects is another example of this. He is a part of a wave of Bay Area musicians making geographical changes that include John Dwyer and Ty Segall. There is a tight knit, supportive music community in Los Angeles that seems more accepting than the higher rents and snobs up in the Bay Area. Tee hee.

It’s for all these reasons that L.A. has become the center of the national music scene and last night at Los Globos was one of those shows that so many people in our community came out to support. Make no mistake, it’s 100% merit based. The Birth Defects at The Griffin shot by Alyson Camus

It’s amazing what a tour can do. The Birth Defects played the tightest show I’ve seen them play in their short history. Just over a month ago I was hanging out with the band before they took the Echoplex stage for Echo Park Rising and Finazzo looked like he was going to have a nervous breakdown.

“I hate this. Why do I do this?”,   Finazzo seemed like he was going to crawl out of his skin. I’ve rarely seen a musician about to take the stage as miserable as Jason Finazzo at Echo Park Rising. 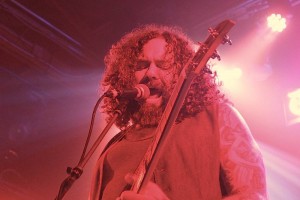 Jason Finazzo of The Birth Defects at The Troubadour

Flash forward to Thursday night at Los Globos. Finazzo seemed jolly and totally at ease as the band took the stage during line check. He gave the sound guy good natured shit about the status of the stage monitors and then proceeded to send the entire crowd into a frenzy with a blistering set of hardcore punk music. One of the only bands in the scene that actually can be categorized as hardcore punk. Even though Birth Defects drummer, Anthony Drinkwater has only been playing with the band for just about 2 weeks, it was the tightest I’ve heard the band play the material off of First 8 Mistakes, which was written by the band and recorded in just a matter of days by album producer, Ty Segall. Rhythm guitarist, Petey Dammit has finally found his stride with the band who have, at times, played gigs without him, making it hard to develop the type of chemistry that is needed for the type of live show I expect from The Birth Defects. The type of show I witnessed last night.  Jon Safley and his bass line on the song Drugs makes me lose it every time.

Once again, The Coathangers played an incredible gig highlighted by dynamic vocals and incredible low end work by bass player, Minnie Coathanger, (Meredith Franco) along with Rusty Coathanger (Stephanie Luke). Crook Kid (Julia Kugel) is mesmerizing and frighteningly talented and charismatic. I can’t wait to hear this new album and make a fool of myself every time I see them around town.