What makes a concert special and superior to the rest? It takes more than just the band playing well. Sometimes a bit of coincidence has to be involved to bring all the karmic forces together. On Sunday April 9th, a drunk veered his truck into a bunch of construction vehicles across from the line at The Echoplex. It was omen for the chaos to come.

Before I get into the meat of this article and make any pretentious observations about Sleaford Mods, opening bands, punk rock or culture in general, let me begin with writing out the chant that follows the subject of this article everywhere they play. A chant that was repeated over and over by drunken middle-aged men that listen to this band on the car stereo as soon as they drop their kids off at school.

Over and over again, I heard this….

It could drive you a bit loony….

Right until it gets stuck in your fuckin’ head…

And you start repeating it with the buzzing crowd, obnoxiously, spitting. 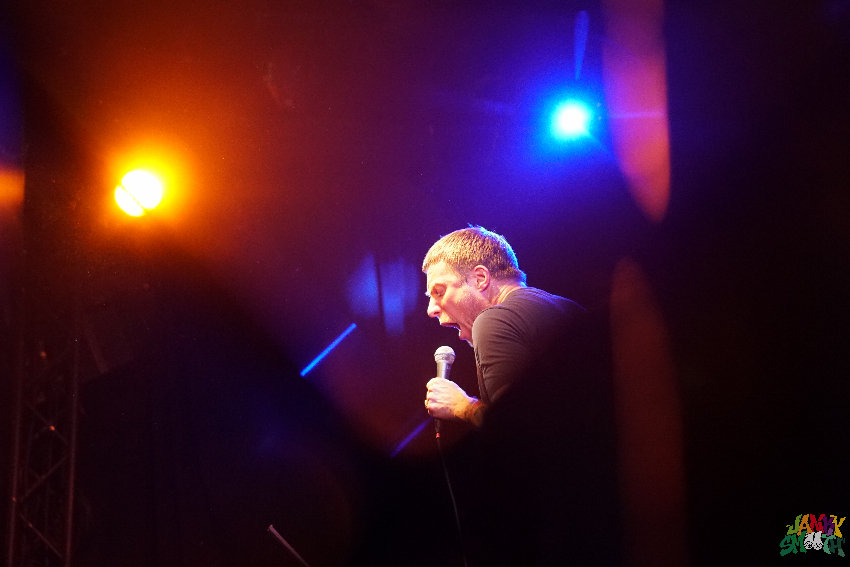 The Mods flew in from across the pond for their first, albeit short, 6 date U.S. tour and a rare Los Angeles appearance at Part Time Punks which was the final date of said tour.

I caught wind of the show after seeing an Instagram post of the flier that claimed it would match the madness of their last show, James Chance and the Contortions. The flier’s synergy felt right and I marked my schedule down to make the show. I sorta forgot about the Mods in the weeks to come until I saw all this hype on social media… 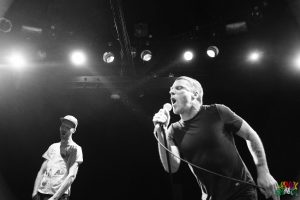 I can vaguely understand the Sex Pistols connection.  This moment in mainstream music is all bollocks if you ask me, so nevermind anyone but Sleaford Mods, right now. Musically, they’re much closer to Public Image Limited and the Mods’ singer, Jason Williamson, does share a certain crassness and cleverness with John Lydon. As an artist and mind I bet Williamson will age better than John Lydon.

There’s a lot of genres thrown around when trying to categorize Sleaford Mods like post punk or rap punk or electro-punk. If that’s the case, then the Mods are the rap punk Sex Pistols while Ho99o9 is the rap punk Bad Brains.

Listening to Sleaford Mods on Spotify, I thought the songs were both catchy and annoying. Live, the Mods are nothing short of a revelation in originality as well as the sound of the modern proletariat.

related content: Ho99o9 Recruit Your Children to Their Death Kult at The Church of Fun

Terminal A: When A Stage Becomes A Cage Anyway, a band that was on my friend’s record label Records Ad Nauseum opened up the show. Terminal A is the combined effort of madman/vocalist/poet/philosopher Colin Peterson and guitarist/motor-city-madman-for-the-modern-era Lee Busch. As soon as their set started, Peterson’s instincts found the stage too confining and he jumped down into the audience to terrorize us. At one moment, he’s still and makes slow, poetic movements. Then in the next moment, he makes a mad dash through people grabbing them forcefully or pantomiming sex acts with them. They’ve played so many underground shows that a stage becomes a cage to them.

Retreating back to the stage, Peterson orated poetic monologues to introduce various songs. Whether scripted or improvised, this was good literature. Kinda like Kenneth Anger films verbalized into prose. Many bands achieve balance between various polar forces. Soft and loud in the Pixies or screaming and singing in metalcore. Terminal A finds their balance by switching between Apollonian and Dionysian art. Do yourself a favor and google those.

If Terminal A was around in the 80’s their vinyl would be collected like gold and would be mentioned in any punk rock inspiration conversation as trendsetters. For 2017 though, I just hope the world is ready for them. Oh and I almost forgot…. Next up were The Urinals, a band I saw at the In The Red Records 25th Anniversary Show last year, only they performed under their pseudonym, 100 Flowers. Their minimalist punk-alternative sound can be traced to numerous bands that came after. They played a long set for a supporting act though, one that didn’t particularly tickle our photographer Todd’s fancy. Boring was the word he used and I could see how the Urinals could feel monotonous when playing for too long but I told myself these guys are fuckin’ legends and got through their set with my head happily bobbing.

Before I go into the headliner. I’d like to make a shout out to the unsung hero of Part Time Punks and that’s their Founder/DJ Michael Stock. He’s the best DJ I’ve ever fuckin’ seen play between band sets.  Does this guy do weddings?  He’s not too shabby as a promoter, either.

Sleaford Mods look and sound like the working class And now it’s time to sit back, close my eyes, take a deep breath, and reflect on the wonderful Sleaford Mods and the show they put on for us. It was a lesson in minimalism in performance.

First, every instrument and bit of equipment was taken off stage sans three milk crates that got stacked atop each other.

Enter Andrew Fearn from stage right wearing a backpack. From out of the backpack, he took his sticker covered laptop and placed it atop the milk crates. This device would go on to mesmerize and maximize our evening. After the anticipation built to a fever pitch and Fearn was supplied long stack of Heineken cans. Williamson took the stage and then Fearn pressed a button to begin their first song Army Nights. As soon as James Williamson stepped into his stage persona, I was filled with numerous observations of his original way of being. He keeps his back straight and mostly just moves his feet in very reserved shuffle like movements. He’ll move his arms too but only to make very poignant gestures. No matter the limb, every move is a calculated effort with every muscle contracting and expanding only as much as needed to get the idea across. He doesn’t go wild like his admirer Iggy Pop but he demands just as much attention. Or maybe he does go wild in a sense, or maybe he just is wild. It’s like that old bit of advice that speaking softly and with conviction gets your point across better.

One thing he’d do is quickly stroke his hair over and over again during a song, kinda like it was a nervous tick. Whatever it was, it sets him apart from every other dancing monkey on stage. Speaking of animals, he uses farm noises like dog ruffs and sheep bleets to drive a few songs home. Sleaford Mods look and sound like the working class. They have swagger and anger but they’re not going to complain about their problems out right, no. They’re too tough and smart for that. In the end, through art, their songs make you sympathize with their declarations.

The most powerful song in their set for me was “TCR” which just hit and hooked in all the right moments and places.

One of the best things about Sleaford Mods is Andrew Fearns’ stage presence, bouncing his weight between his feet while standing in the shadows and bobbing his head and singing along to the songs and downing imported beer after beer. The audience sees Fearn and is reminded of someone they know or themselves or both. He’s a chiller and a very talented one. At one moment, he paused his laptop mid-song over a Sprite he was accidently given instead of a Heineken. Later, I noticed that he switched from Heinekens to Sapporos. Andrew Fearn is the baller we all wish we could befriend.

Geez, what a show.  I have no doubt that everyone left that place stoked and sweaty and thinking about the Mods till the next day like I did.  Here was the set list: 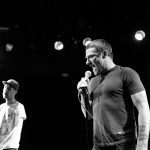 Sleaford Mods at The Echoplex 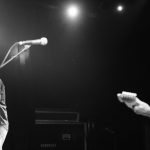