This past Saturday, The Shredtopia Music Festival and Skate Contest came to the Santa Monica Pier and low key, was one of the funnest skate contests I’ve been to in a long time. Was it because the contestants were 90% comprised of the skaters I see daily at the Venice Skatepark or was it because of the 10% of skaters that came to test them on their home field? With little promotion and the El Gato Competition happening concurrently in Palm Springs, the turn out for Shredtopia was light but the times were good and that made for an intimate but competitive event fought amongst friends. Bands were playing throughout the competition and in particular, Meet Me at The Pub set a high energy soundtrack to a number of the heats and Tony Alva’s band, “His Eyes Have Fangs” switched the vibe up nicely for the final round. I was a bit disappointed that TA’s other band, GFP wasn’t playing Shredtopia. Given the nature of the event, GFP might’ve been more apropos but His Eyes Have Fangs have a pretty cool sound too. Tony Alva with his band, His Eyes Have Fangs at Shredtopia

There was no shortage of controversy, though. Between some of the names left off the finals roster and the order of the top 3, some people were crying foul when I went for my skate the next day at the skatepark (no complaints from anyone competing, though). Having watched almost every round from beginning to end I can say I did not envy the job of the judges in deciding how to divvy up the $2,500 in prize money. I don’t think I’ve EVER seen the type of rhythm these competitors set during this competition.

As usual, any skate event taking place on the westside of Los Angeles included deep involvement by the Venice Skate Alliance. And the OG’s, who at one time were busy trying to avoid charges were charged with security as well as their other full time job- guiding groms through and around the pitfalls of the skate life that they once fell into themselves. There was huge excitement over the triple set course that was being built by California Rampworks for Shredtopia. After all, if they can build Mega Ramps and X-Games SuperPark and Street Courses then imagine what they could do for Shredtopia. Unfortunately, it seemed that corners were cut. Literally. Coming off the steps on one side and the rail on the other, the area available to land the tricks on the edges of the course had deep cuts that exposed the planks of the pier’s boardwalk and fucked up some really dope tricks. I’m sure California Rampworks gave a pretty sweet deal so it’s hard to criticize them too much for the janky parts on the course they built for this event but it was a factor in the competition. There were approximately 50 skaters competing for the $2,500 prize pool. They were split up into 5 qualifying heats. It seemed incredibly hard to pick the skaters for the final round. Skater after skater stuck trick after trick. One of the frontrunners predicted to win this contest was Venice local, Blake Johnson. There was a bit of controversy around Blake placing 3rd in the contest but to me, the most controversial developments were in the field of skaters selected to skate the final round. In my humble opinion, Jesus Correa and Willy Correa (no relation) should’ve been in the hunt, skating for the money. 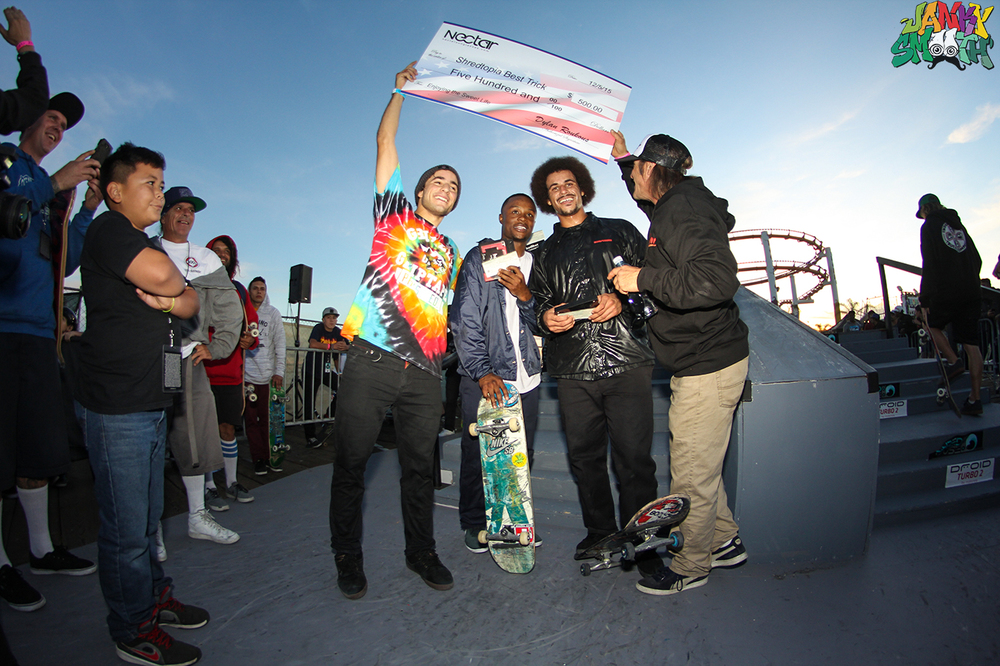 I had the best time kickin it at this contest. Many of the skaters I see on a daily basis turned their skating level up a notch and performing under pressure is what separates the pros from the amateurs. The future is very bright for the skater kids on the Westside of Los Angeles. I hope Shredhouse Productions decides to hold Shredtopia again next year. It would be a welcome tradition.

Shredtopia 2015 from Caro on Vimeo.