Entitled, lazy, over sensitive, under ambitious- These are just a few of the adjectives used to brand the generation labeled Millennials. Anytime you see a segment on TV or read something online or in print about Millennials, these are the themes used to attribute to this emerging generation that is coming of age at such a crucial time for this planet. What do you think? Are they right about you?

I, for one have had your back from the beginning. Your generation is facing unprecedented challenges in the opportunities available to you and your friends. Unless mommy and daddy are well off, you can no longer get a higher education without graduating in a mountain of debt. Once you graduate, the opportunities available to you are mediocre, at best. Forget college- you can no longer work a labor job and make it to the middle class.  Believe it or not, that used to be possible.  You could work a job or two for $1o an hour and buy a house within a few years.  They won’t even raise the minimum wage as they have everytime inflation dictated that they do so.  We are in a completely fucked situation right now and what will you do about it?  Where you at?

And the attacks by the media- Why are they so on your case? It’s because they are afraid of you. It’s because you don’t consume news from one of the information spigots they control and that means that they can’t control you like they control the more aged cattle in this once great country.  It’s because you are now the biggest voting block in this country.

In my experience running Janky Smooth over the past year, I’ve spent a lot of time with y’all. What I’ve seen is a very entrepreneurial generation that is adapting to the stagnation of the economy and the scarcity of the type of opportunity your parents and their parents had. And that would be ok if the game weren’t so rigged against you/us. The beautiful thing about Capitalism and what made America great was the “Free Market”. The Free Market is what turned America into the greatest country in the history of the world. But that’s over now. The free market was based on you and me. We decided what companies lived and died and what products we consume and what type of food we put in our body. A truly free market is based on the consumer, not the companies peddling their products in the market place. A free market insured that there would be innovation and competition to drive the economy, not the system that is in place now, which is based on politicians making laws that are attractive to their campaign donors and their agenda’s. If you want to understand how the game has changed, all you have to do is READ THIS ARTICLE and THIS ARTICLE. These articles are the perfect illustration about why our roads and bridges are crumbling. Why we aren’t able to revamp our power grid for the 21st century. Why our public education system is broken. Why a kid smoking pot goes to jail while the small handful of people that crashed the world’s economy are fine dining instead of sitting in a prison where they belong.  Why both Monsanto and the Big Pharma industry are IMMUNE FROM PROSECUTION.  They could lie about the safety of their products, make us all sick and they could never be prosecuted for it.  The point of this article is not to convince you to vote for Bernie Sanders, who is the only politician I’ve ever seen in my time on this earth that isn’t owned like every other politician that is running for president. No. Just vote. Look at the candidates and decide who speaks for you and JUST VOTE. That’s all you have to do to change the composition of the presidency, congress and the supreme court.  Just vote for the candidate that you think will get the big money out of our political system.  That big money is why we can’t get anything productive done in government.  That big money is why President Obama put a Monsanto lobbyist in charge of the Food and Drug Administration.

You did fuck up in 2014 but who could blame you? The low voter turnout during the 2014 midterm election insured that politicians that are deep in the pockets of our corporate overlords dug themselves deeper into our government. Part of that is due to gerrymandered districts but I’ll tell you this with complete certainty- if you guys turned out to vote in big numbers, there’s nothing this corrupt system could do to insure the politicians they want in office could remain in their positions if you don’t want them there. It really is all about you, right now. This upcoming election will determine whether or not my generation and the generation before mine are right about you. Are you worth a shit? Can you be bothered to turn up on election day to determine your own future and in essence, the future of the entire planet? If you can’t, then I see no reason to argue with what ANYONE has to say about you.

I have seen very plainly that our system is completely compromised by money and until VERY recently, I told myself there is no point in voting. But the opportunity that is available to us now is like none I have ever seen on my time in this earth. The presidency, both houses of congress and the Supreme Court are completely up for grabs. Right here. Right now. This election will determine the future of our country for the next 30 years. You and your friends have more power right now than any 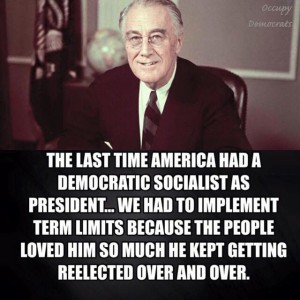 generation has since FDR served 12 years as president. 12 years that made this country stronger than it ever has been. 12 years that saw the creation of the Social Security program, the GI bill, child labor laws, strong unions that balanced the power of rich corporations and made it possible for the working class to have a voice for more than 50 years and the most successful generation of American citizenry in the history of our country. If FDR was running for president now, he would be labeled the same way Bernie Sanders is being labeled now. FDR was a democratic socialist, as well. Maybe not in name but certainly in the incredible policies that resulted from his presidency.

The reason why my generation (Gen X) and every generation before mine won’t see what I see and you see is because we have effectively been divided by race, class, gender, sexual orientation. This was no accident. It’s no accident that we’ve been arguing about abortion rights for the past 30 years. It’s no accident that not one republican in national office thinks climate change is real. As long as you and I disagree with each other about emotional issues then we won’t see how we are being raped by those who are supposed to represent us. My concern in this election is not about fighting for free education and healthcare. We will never get those things passed as long as there are politicians getting wealthy off their elected office. The only thing we should focus on is getting big money out of politics. Everything else is just noise to distract us from the pillaging of the opportunity that is available for you and your friends.

Please prove the world wrong about you. If you vote in this upcoming election, you can be the biggest heroes that the world has ever seen. One vote at a time. You can do this. And if you don’t, America is over. I’m not exaggerating. Just show up on election day and vote for the person that will fight to get all this big money out of politics. Whoever you think that may be.

I’m going to do everything in MY power to help get this money out of politics.  That why we started the New Sound Alliance (NSA) and it will be the main topic of discussion on our new radio show, Janky Smooth and the NSA on the Los Anarchy station at Dash Radio. Download the Dash Radio app and tune in Monday’s between 6-8pm pacific to hear more about what we can do to come together and reverse the tide that is washing away the American Dream.  We’ll be playing the best of new and classic music from the popular underground, having in studio performances and discussing solutions with special guests of the show.

No matter if you agree with me on who the right candidate is or not, just vote.  Prove the world wrong about you.  I know you will.