All year long, as racial tensions have been building, I have seen a steady incline in the amount of Los Crudos patches on denim jackets.  While Donald Trump kept digging a grave for himself in the heart of white nationalist sensibility, with every racist, anti-constitutional comment, Los Crudos songs started appearing more and more over the loud speakers in between sets at shows.  Was it sheer animal magnetism, fate or the power of attraction that Los Crudos announced a matinee show at The Echoplex for November 13th?  Or could Martin Sorrondeguy sense his voice was needed in Los Angeles, now more than ever? With only a week since Donald Trump was crowned president-elect against Hillary Clinton, Angelinos reorganized, prioritized, and took to the streets but when it came to hearing the right words, every protestor needed to bear witness to Sorrondeguy speaking. 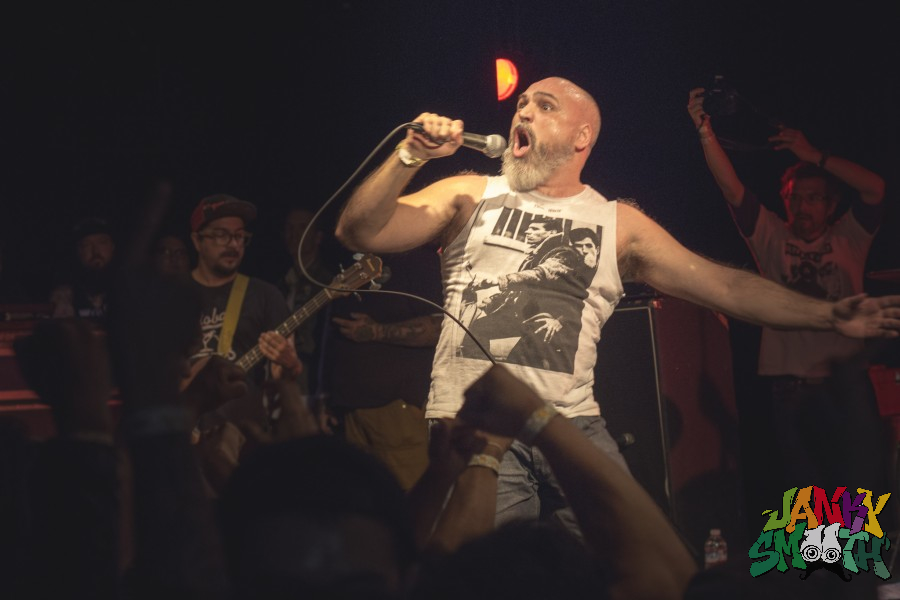 Los Crudos at the Echoplex

Los Crudos is a Chicago based punk band from the 90’s that popularized Spanish lyrics in hardcore punk. They’ve always been singing about the very politicized issues that came up in this election: xenophobia, racism, economic inequality, and immigration.

This was the second punk show I’ve seen since Donald Trump won and already the energy feels drastically different. Every song is more electric and every person feels pushed to move. We all felt our lives change on November 9th, the sense that what was before will never be again. Punk venues feel like hideouts now, like we’ve all been hoarded into bunkers to meet in secret and say forbidden things.

How would a Crass concert have felt in Munich in 1940? We’re not there yet but we are being given a whiff. Remorseless at The Echoplex

Remorseless began the matinee to an already present and forming crowd. Andrew Flores took the stage wearing a black leotard and heels, prowling and singing, and shrieking like a mohawked jungle cat with a pink stripe running down his head. Singing and harmonizing with him was Inez Parra and together they burned the book on male and female gender roles. With anarcho and death rock licks and pure shred science, Johnny Dermo tried not to make too much of spectacle with his guitar playing but he couldn’t help it. He was pulling us all by a sonic leash. Remorseless played a set that was an invitation to uniqueness and critical thinking making me realize one begets the other. Inez sang one fiercely charged feminist punk anthem “Womb of the Witch” a song about letting people decide the fates of their own bodies.

Up next in that day’s cavalcade of Latino punks and Angelino angst was Marron, a hardcore piece from Santa Ana that sang politically charged songs with legitimately powerful lyrics and plenty of hardcore bounce and swagger. The lead singer would thrill us with higher language in his political banter between songs. It was like seeing a young Noam Chomsky up there, slamming. Tozcos was next playing frantic and frenzied hardcore punk with female vocals and Spanish lyrics. Of all the bands this was most pure punk, crusty, grimy sounding, street set of the night. It brought the intensity of a backyard show with the props of an old school London pogo party to the plex.
The moment I realized Los Crudos was about to put on an insane show was during the band’s sound check when the guitarist took the vocalist’s mic to do a test shriek. The tone and pitch of that shriek was so primal and animalistic that if Sorrondeguy was going to come on stage and do that for an hour, then well, we’re all fucked. Stuffed in the pit like a tin of sardines, we were going to make this place fucking explode. 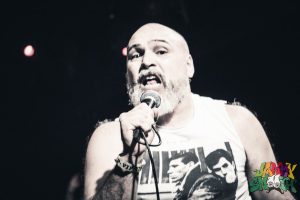 Sorrondeguy came out on stage to a hail of cheers and chants of “Viva la Raza!” and “Fuck Donald Trump!” then when he began to speak we all hushed up and he became a protester, poet, and punk singer all at once.

“We’re very happy to be back in LA… the timing could not be better, right?… We’re Los Crudos and we don’t like to take shit from anybody… that fool won an election but he didn’t win me and he didn’t win you… our worlds and where we come from, we are resilient mother fuckers and we’ve dealt with a lot of bull shit… we will never disappear, we are not going anywhere, we will be here and continue to be here… and as punks, punks need to step up… there’s a time to party and a time to get people’s backs…”

As soon as he launched into the first song the place was ripped apart by a buzz-saw flurry of limbs punching and kicking and moshing and slamming into every object. The fast, unforgiving punk sound pulled people into the pit that would never dare split a hair otherwise.

Every song was fast and short and got people on stage to dive and come crashing down onto us. Every bit of violent blunt or sharp impact was simultaneously a protest against complacency and a sign of how we’ve all been damaged by this national catastrophe. This election shattered some people’s minds but Martin’s screaming somehow pulled some of those pieces back together.

Every song was short, fast, brutal and followed by Sonnendeguy speaking to an audience he held in the palm of his hand.

“I have to say even as a gay man, I love women more than men… sisters, you’ve been fighting all your lives…”

In that moment, even the most macho of mother fuckers, felt their heart strings tugged on, no matter how beaten or sweaty they were. We all thought about our mothers, sisters, and daughters and how much work and pain this world asks of them.

The second to last song was “Asesinos”, one of the band’s staples.

“When Trump and his people do what they do and say what they say, they’re killing people in a certain way. That’s why I say we have to be really strong and resilient… I’ve always said everybody in our own way has dealt with somebody trying to kill something in us. This song “Asesinos” means Assassins and you can think about it in a bigger term like the military dictatorship or maybe it’s a person in your life that’s always trying to drag you down. It’s about overcoming that… there’s going to be some very interesting times coming our way… I got your back please have mine, please have the backs of trans kids, queer people, all people of color, everyone that speaks a different language… BE PUNK, BE REAL FUCKIN’ PUNK, STEP UP.” Los Crudos blasted into the song and with the last bit of energy we were saving in case we had to run for our lives, we came together to tear the Echoplex apart.

What I took from this show was simple, in the wake of this week’s protests, mostly nonviolent and rather tame, the only way to make a lasting impact either on the state or in people’s hearts is to be a savage. Not a violent savage, but a savage. Act with such conviction that people cannot forget it. Be a little crazy but be smart. I learned that if you don’t stand up for people and instead just bob your head to the tunes then well, I guess you’re just a poseur.

Punks of America, punks of Mexico, the red, white, and blue calls upon you… the conditions to pardon our savagery have been met… Release your inner GG Allin, release your inner Jonny Rotten, your inner Steve Ignorant, your inner Bernie Sanders. Fight the power. Resist. Be Punk.