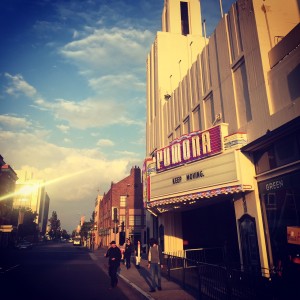 Even before LCD Soundsystem took the stage at the Fox Theater in Pomona, walking into the venue and seeing the stage set up caused goose bumps up and down my arm. A dozen music stations with various traditional and futuristic musical instruments littered the stage in clumps of components and wires. I didn’t get press access to this highly sought after event. Instead, my friend Jeremy scored a ticket by camping out at Permanent Records through Saturday morning and graciously offered it to me. I accepted. As with most events in a theater venue like this, to get on the floor in the “pit” area for the show you have to show up early and get a floor “wristband”. We arrived in Pomona at about 5:45 pm. LCD Soundsystem wouldn’t start their set until 10:04 pm. We were herded through various lines and holding areas near the venue until the doors opened at 8pm. At one point we were closed in to gates in a snaking line that filled up the area like some sort of hipster Auschwitz. But when the gates opened and we began filing into the Fox, it became very real that I was about to see LCD fucking Soundsystem for the very first time. 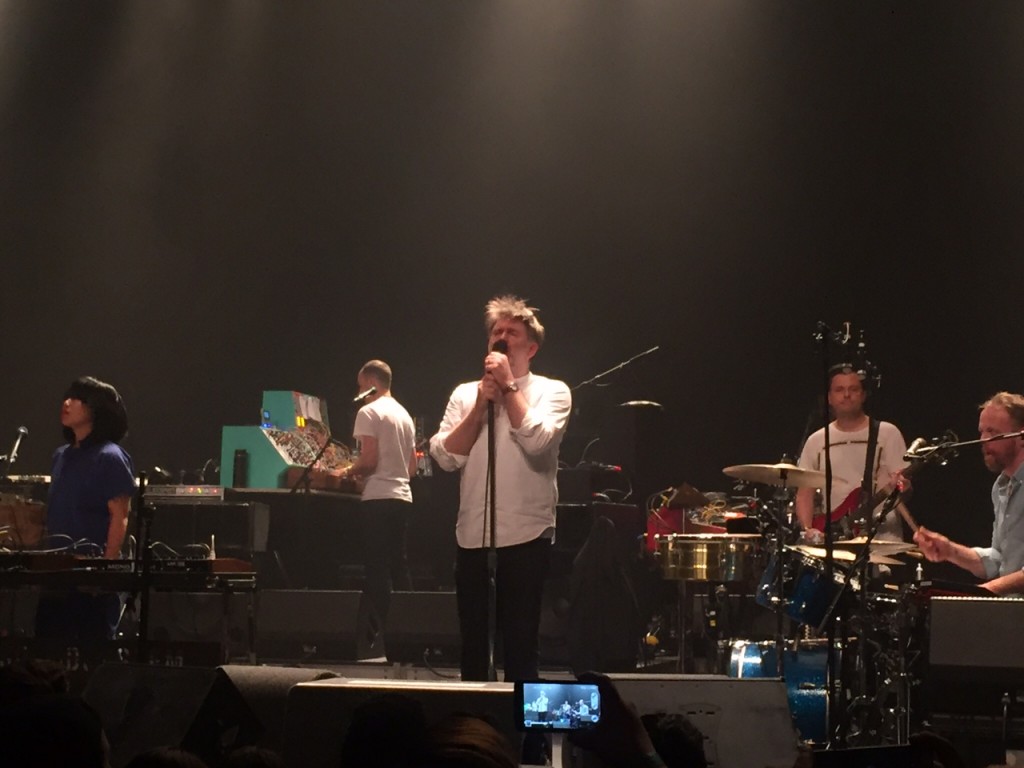 “We played here many years ago”, Murphy explained. “It always reminded me of all the other great venues just OUTSIDE of big cities”.

LCD Soundsystem played their first west coast show in 5 years last night in Pomona; a resurgent city that rests appx 45 minutes outside of Downtown LA, without traffic. This is yet another big name act opting to skip playing a gig inside the traditionally recognized borders of the city of Los Angeles. I could easily go off on a tangent here but I don’t want to take away from the momentous event I witnessed on Monday. I’ve been and lived around the world and Los Angeles is my favorite place in it. I’m born and raised and do or die but it’s no secret that outside of hardcore circles, L.A. concert crowds are jaded, industry celebrity dick suckers. Someone who knows someone gets comped to go to this show of this band they heard of and that everyone seems to want a piece of so, why not check it out? L.A. I love you but you’re bringing me down. To be fair, the L.A. stereotype is perpetuated by it’s transplants but that fact doesn’t change that Angeleno’s increasingly have to drive to Pomona or The Observatory in Orange County to see some of the biggest acts who don’t want to take a chance on a folded arm crowd. It was clear that LCD Soundsystem didn’t want anyone but their biggest fans at these first few shows of their triumphant comeback. I.D.’s were checked and matched with names on tickets and many other techniques used to identify scalped tickets and you know what? It led to a rabid house full of super fans; many of which were under 25. It was incredible to see so many fans in their early 20’s, singing every lyric back to Murphy and crew, acknowledging just how well the LCD Soundsystem catalog survived over their 5 year absence.

With all the rumblings of a reunion for the past year, this night became a reality on Christmas Eve when a tweet rang out across the world. That tweet was the path to the first new LCD song in 5 years and it was somehow appropriate that it was one of the saddest bastard XMAS songs I’ve ever heard. 4 months later and here we were, the third show LCD Soundsystem have played in over half a decade.

James Murphy walked the stage of the Fox Theater in Pomona as if he were hosting some friends for a dinner party in his living room.   There was ease and comfort that seemed implausible after such a long hiatus. The band jumped head first into the set by kicking it off with “Us vs Them”, followed by “Daft Punk is Playing at My House” and just like that, LCD Soundsystem were back.

For me, the highlight of the set came with the last three songs before the encore when the band played “Losing My Edge”, “Home” and “New York I Love You…” and directly into “Dance Yrself Clean” once the band returned from their beverage and bathroom breaks backstage.

I can’t believe I get to see them again THIS Friday night at Coachella. While nothing will compare to the intimate setting of the Fox, I think the dance party that is going to explode at the Polo Fields will be something to behold. Welcome back to the game, LCD Soundsystem. You were missed.

Daft Punk Is Playing at My House

You Wanted a Hit

New York, I Love You But You’re Bringing Me Down