Los Angeles was soaking wet. Drenched and dripping. A cold quiet Sunday…but not at the world renowned Troubadour in West Hollywood. L7 was making history, gracing the stage for the first time in their 31 (!) year career.

I almost didn’t make it out, fresh off a raucous and sleepless trip to NYC, but this was the first of two final shows for L7 after a continuous 2 years of touring leading up to the premiere of their documentary “L7: Pretend We’re Dead”. I threw on all black and headed west. I walked into the Troub right as Suzi (Gardner) told the sold-out crowd to tip their waitresses, as she used to be one there. I love L.A.

They were only into their 3rd song and the place was already a sweat monstrosity, replete with mini circle pit for a few of the (many) old school heads that came out that night. Donita had her flying V strapped on, Jen (“Precious” Finch) struggled with her tech to get her Misfits bass working and they had a false start the 4th or 5th song in. It was then that I realized they were also wearing all black…they had just returned from NYC…and they didn’t give a fuck. We were all a little braindead and they still were there to shred the house down. That’s L7. Dee (Plakas) kept the set going for a grimy, guttery 90 minutes…Suzi was on top of the humour, dedicating each song to another legend who had graced the Troubadour stage… “This one’s for…James Taylor”. I think it went over most people’s heads but I was pleased. They took their setbacks like the bad-asses they are…when Jen’s bass gave out on her, she laughed, dropped it and jumped into the crowd with ease until her tech could set it back up…bless him…she ended up doing it herself. Donita took a turn in the crowd, bringing her guitar with her and during One More Thing she yelled “suck it Trump” before diving back in for a second turn at crowd-surfing. 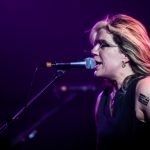 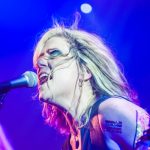 They finished strong with favorites like Shove and Shitlist. The crowd singing along to every word. We ran into friend and L7’s manager, Robert Fagan, who ensured us the ladies- Had. Not. Stopped in nearly the entirety of those 2 years. They were in over a dozen countries, Australia and Europe… twice for the latter and countless festivals.  Not to mention work and events related to their (crowdfunded) documentary. I’ll be damned if they didn’t come out for an encore though.

The ladies tore into “American Society”, “Pretend We’re Dead”, and “Fast and Frightening” with almost more vigor than when they started. L7 is so fucking metal. I was sure they were off to their respective residences after the show since they had one final, sold-out, gig the next nite at the Echoplex. Nope. We had tequila shots in the upstairs lounge as the rain came down along with their name on the marquee. Closed the joint out. They thanked the Troubadour but I’m pretty sure the Troubadour was thanking them for finally grating their stage to metal shreds in headbanging heroism.

Unfortunately, I missed Hit Bargain opening the show.  I heard that they really impressed some hard to impress people I know.  Next time. 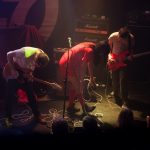 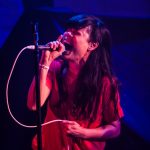 Must Have More Drama