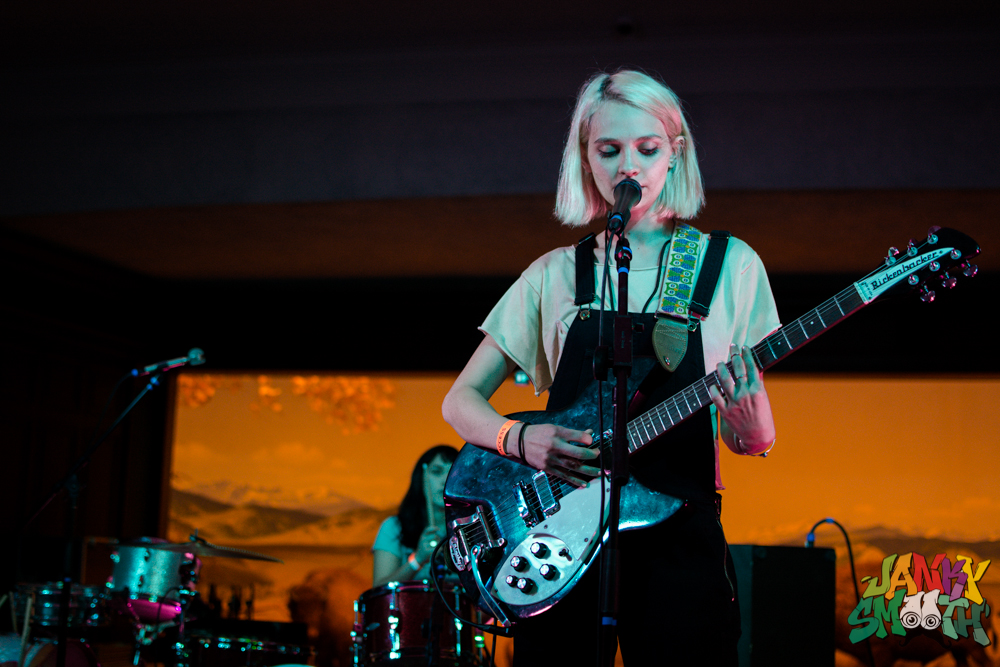 Where can you find dinosaurs going hard in the pit on a Friday night? At the Natural History Museum, of course, as part of their First Fridays program, which last night featured Cherry Glazerr and White Fence.

First off, I have to say how genius the First Fridays’ concert series is. Science is always cool, Los Angeles rock is better than ever and the audience has never been to a venue with a floor this clean. After navigating LA traffic from Orange County, I eventually made it to the Hall of North American Mammals to mosh with some stuffed gray wolves and Clem Creevey, Cherry Glazerr’s lead singer and guitarist. I’ve seen Cherry Glazerr a handful of times, most recently when they opened for Sky Ferreira in November. Six months, a new single and dozens of shows later, Clem is an entirely different performer. Once a pixie teenaged hipster, now Clem is more punk demon ready to take on anyone who dares call her and her band “cute.” Shrieking, gut-busting vocals unleashed a fury of angst throughout the crowd. Their brief set, of which I only saw the last half, was enough to get out all the frustrations I may have gone through this week. Thanks for the catharsis Cherry Glazerr. Anthony Valadez Mixing it Up at First Fridays

Between sets, I made my way over to the DJ room in the African Mammal Hall, where DJ Raul Campos and Anthony Valadez laid down some of the sickest beats I’ve heard in a while. To not dance or groove even a little would have been impossible. Trombone added the magic touch to the Latin mixes that pulsed, causing hips to swing and creating endless Snapchat stories. I walked back into the North American Mammal Hall to see White Fence with pretty much no idea what to expect. I’ve only listened to their music in passing, so I wouldn’t call myself a fan of theirs. Their set last night left me rather confused, actually. For every upbeat, shredding track, there was a slow fizzling song to follow it. I wanted some consistency- to either immerse myself into a pit or stay vibing to the glimmer music the whole set. I found myself going back and forth, not knowing exactly what energy-level to maintain. No one else seemed to have this problem, however, with the rest of the crowd falling right in step with the chaos and taking a time out when the mood was right to just sway instead.

At one point, Tim Presley kindly reminded us that the brontosaurus has been reinstated as a dinosaur, almost making the whole event feel like some weird inside joke. Yes, I couldn’t help but ask myself, as I learned what a collared peccary was and wandered around the Nature Lab between sets, why? Why is there a concert here, of all places? How did they book these bands for a classy evening of learning, drinking and dancing?

In the end I realized these answers didn’t really matter, to just enjoy this unconventional and unique night out.