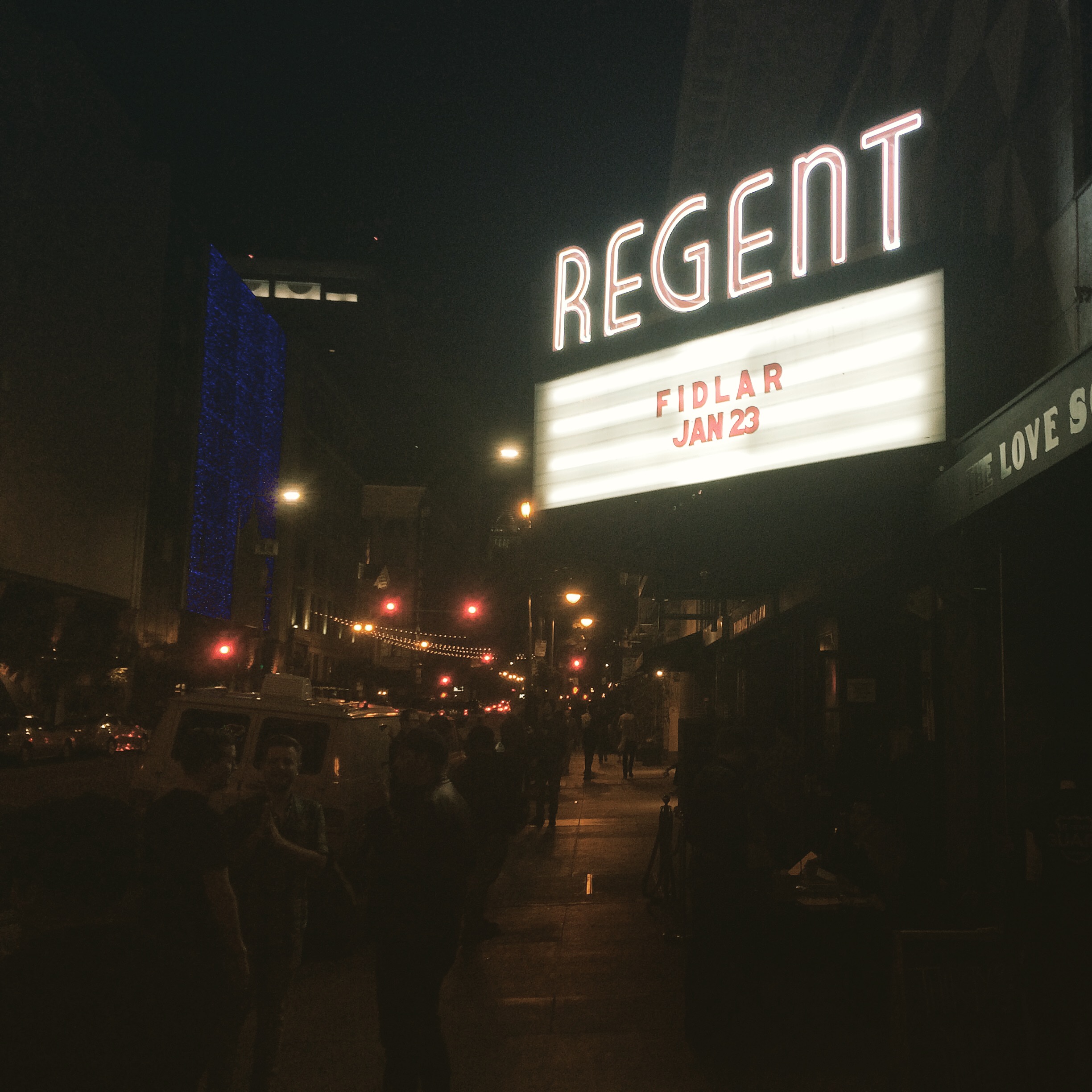 We all know FIDLAR as the beer swilling, vagina drilling, fun poking, nose coking blacked out voice of this generation. Proof that art imitates life and not the other way around. They are history repeating itself without being boring or predictable but rather, a reinforcement that the youth of today are still angry, sad and depressed enough to change this world if they are able to survive the chaos of coming of age. Zac Carper took a deep breath as he scanned the audience and began to formulate his thoughts. “This is fuckin me up. The Smell, this place, everything.” It reminded me of a statement from a man who has been on his best behavior for an extended amount of time, trying not to succumb to requests like, “C’mon, one hit won’t kill you”. And then they started playing Cheap Beer and the place exploded.

The Regent Theater was combustible all night and why not? I’m pretty sure the last show FIDLAR played was headlining Burgerama 3 last year and they were not in their best form at that gig. Zac could hardly form a sentence and the band was not tight. Flash forward 10 months later and FIDLAR are playing the best show I’ve seen them play since their record release at the L.A. Fort in 2013. FIDLAR is back!

In fact, this show was so good that it made me wonder if the band had camped out in the bowels of the Regent all week, rehearsing and sound checking for days on end because Friday night was also the best sound I’ve heard at The Regent since the place opened in November.

Truth is, I didn’t expect much from this show. For some reason I was expecting the band to unveil a ton of new material that all sounded like the song “Awkward” but from the band opening with Stoked and Broke and ending the show with The Punks are Finally Taking Acid, I was so relieved at how good it was that I actually, almost sang along with Awkward when they played it.

What makes FIDLAR so good is the sum of it’s parts. Co-lead singer and lead guitarist Elvis Kuehn has one of the best guitar tones in the business. In the debate of John Lennon vs Paul McCartney, Elvis Kuehn is George Harrison. He’s a supremely talented guitarist and his song writing contributions such as LDA, Waiting for the Man, Blackout Stout and White on White give FIDLAR songs that extra dimension that are the difference between being a sloppy garage band as opposed to a mature sound that has been present with the band since it’s formation.

Max Kuehn and Brandon Schwartzel are the backbone of the band. They tighten the screws and keep everything in place on the rare occasions that the rest of the band misplace their footing. Brandon’s signature, high pitched, “Thank you” at the conclusion of every song have become a tradition and some sort of psychological tick, each one with a different vocal inflection and various levels and depths of emotion which express how he feels about the audiences’ participation at the end of each song.

Zac Carper, unmistakably, is the magnetic front man of FIDLAR. His anthemic songwriting takes pain and sorrow and turns it into a good time. That moment in misery when you realize that you don’t have to sulk in solitude and that there is at least one person out there that feels like you do. Then you go to a FIDLAR show and realize that there is an army of people that can relate. We all feel this way at some point and when we get together, we are going to fuck shit up and make sure our discontent is heard.

Those kids filled up The Regent and the enthusiasm and the excitement of seeing FIDLAR after a bit of a hiatus was ignited by the Meatbodies and their facemelting set of rock and roll. The Meatbodies were the perfect band to open for FIDLAR because a band that good can only push the headliners to do better. Chad really has something here and I look forward to seeing the Meatbodies headline their own shows soon.

Zac seemed nostalgic in all his interactions with the crowd. He gave a shout out to some parking lot that I didn’t catch the name of and 17 people in the audience lost their minds at the mere mention of it. “I like parking lots. They are dirty…”, Zac’s eyes almost glazed over in euphoric recall as he was giving his ode to flat, empty concrete slabs and the end of his rant was punctuated by the song Wake, Bake, Skate. It was this song that turned me onto FIDLAR when I first saw the video on their YouTube channel. In a world full of emo punk rockers, it is important to have a band like FIDLAR who skate, surf and fuck shit up. When I found out that John Cardiel is Zac Carpers favorite skater, it made everything fall into place and I knew I would be a life long fan. I’m anxiously awaiting the next full release. I hope they keep up the aggression for at least one or two more full length albums. Young bands today seem to pull the trigger to early on creating something a bit more mainstream than the sound that made them popular in the first place. If Zac starts to write songs about sobriety, I hope they push the aggression envelope and take FIDLAR to the next level, rather than create a satirical version of FIDLAR to present to a wider demographic. FIDLAR at the Regent 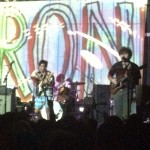