In my quest for mind expansion through live musical experience, I’ve been fortunate enough to write about festivals that I might not have cared to attend If I was just a casual music fan. This was the case for Berserktown, 8BitLA, and now 1Fest: Los Angeles. I’ve learned that taking a risk and just diving into a genre of music without prior knowledge usually only reaps joyful reward. Absorbing too much musical diversity has its drawbacks, though. The mind can expand so much that the brain might start pressing against the inside of the skull and adapt by developing a sort of exo-skeleton, a crust. Brain crust.

Crust punk and Grindcore- Two genres birthed out of the aesthetics of British Anarchist punk OG’s Crass. Grindcore was first conceptualized by Napalm Death as half political dissidence and half musical farce, with songs that only lasted seconds and little care for actually singing the lyrics live. Grindcore, although as separate from mainstream heavy music as possible, is still thriving and alive because Grindcore is not simply a musical genre but a challenge. It is a challenge to any band to see how much combined force they can pack into a short song. So, I’m not positive that the members of these bands actually listen to Grindcore in their spare time as much as they want to take on the challenge. The sound of Grindcore is the sound of rot. The images surrounding Grindcore surpass violence into shocking, humorless grotesquery.

Force is exactly what I got out of 1Fest: Los Angeles. For six and a half hours, I was pummeled by noise. The little balls of toilet paper I had used as ear-plugs were clearly damaged on a molecular level after filtering a festival’s worth of trauma.

The moment I stepped into Los Globos, I was surrounded by the aesthetics of grind. The promotor’s, Nonzerosum, wristband read “Where is the Unity?” Grindcore politics are nihilist based- they know there’s no hope for humanity so Grindcore kids don’t ask for change, they take it. In the anarchist, DIY spirit, multiple bands shared multiple merch booths selling black and white depictions of nihilist moments of the human experience printed onto black T-shirts. I looked down at my lineup schedule and saw that every band but Eyehategod only had twenty minutes to play. Little did I know how much you can jam into twenty minutes.

The first band to play was Throat on the upstairs stage. Their wailing guitars and crashing drums were played with such intensity that it made a very violent wall of noise that bounced from slow quicksand to rocket-from-hell speeds. The singer sang among us, below the stage as many other acts would do this evening.

Another aspect of Grindcore is the dual vocal styles often executed by the same singer. Whereas plenty of metal bands incorporate what is known as good-cop-bad-cop vocals where songs include screams and clear singing, Grindcore uses bad-cop-worse-cop vocals with shrieks and growls. Shrieks that sound like rats gnawing through flesh.

The next band to play downstairs was Concilio Cadaverico, a punkier sort of underground sound that harkened bands like Discharge and MDC. I couldn’t understand the lyrics but would bet they were political.

Burning calories and ascending the stairs again, I got to check out Momentum, a band out of Pico Rivera that I suspect will go places. They’re a more metallic-hardcore trip, kinda like a new West Coast Cro-Mags with dueling guitars. When one guitar breaks down the other plays diabolical riffs. The singer’s vocal tone and presence were confrontational and aggressive. Momentum definitely shined through the lineup’s early-bird bands.

Downstairs, Syntax was gearing up to play. Their mix of explosive grind vocals and chaotic mathcore guitars made the lack of bass completely overlooked. The band mentioned all sorts of merch they had available and as Grindcore fans do, they spat back insults like “can I get a Syntax Juicer?”

Loving to hate is another element of Grindcore.  These music fans are not domesticated- if the band banters to them they will get shit on, only in good fun of course. For example, when one band asked if the audience wanted one more song at the end of their set, the audience replied “GET OFF THE STAGE!” Furthermore, I got shoved around by people that needed to get around me and flipped off by the Eyehategod merch guy for asking the price of a shirt. I took this abuse happily though, it’s refreshing to see people being actively aggressive in LA.

Deadbeat was next upstairs. They were faster than hell with super short songs and played a set that, through feedback, all melted together into one, long unrelenting song.

Down below, Fissure played insanely heavy but more complexly structured songs. The singer was going so ape shit, cartwheeling and rolling into audience members, that he gave off a genuine feeling of danger. I took a moment to take in the Grindcore fashion style. The kids wore short-shorts, athletic shoes, and had patches everywhere. A more brutal version of hardcore fashion. But then, unlike hardcore, I saw plenty of people representing bands as far from Grindcore as one could imagine. Ween stickers and shirts, Sunn O))) shirts, Love and Rockets shirts, Thin Lizzy, you name it. Back upstairs, Grindcore veterans Invertebrate played the fastest drums thus far. Like Throat, they bounced back from doomy slow riffs to insanely intense speed. The trio played the shortest song of the fest to that point, only 2-3 seconds, tops. It was just a growl over a splash of guitar and drums but in Grindcore that single growl could mean any line of quick poetry. Then back to the upper deck, Calafia Puta initiated the first pit of the fest. Grindcore moshing was more violent and chaotic than either hardcore or metal moshing. The band ripped through their Punk en Espanol. They were like a crustier Los Crudos. At one point the audience all got on stage and the savage singer sung from atop their shoulders. Proving that Grindcore is not a boy’s club, Escuela played next and their female vocalist ripped just as brutally as anyone else, spitting between songs. At one point their drummer informed us “the public school system brainwashes your children.” 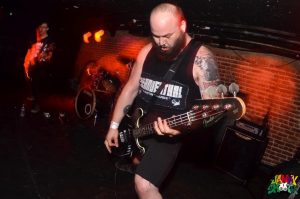 Besides EHG, the band I was most excited to see was Backslider. Listening to them on my way to the festival, they seemed like a short and sweet, bitter batch of brutality. Backslider is more of a power violence band than a Grindcore band. The difference between those two genres is that power violence is structured in a much looser way. It’s not about packing the most punch as it is about punching hard to play something interesting and cool. Backslider could go into moments of melodic, sonic ecstasy and let the crowd lose themselves instead of just pummeling them with calculated noise. Mixing their vocals with a bit of reverb, the growls have more of a punch than other bands. They felt like the Big Black of power violence. 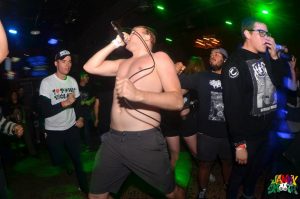 Now the upstairs stage was closed and the downstairs became the only show in town. Mellow Harsher was next and the set they delivered was so intense that it made me realize the festival was only about to start peaking. They opened with “Open Sore” and the singer immediately jumped into the audience, took his shirt off, and started moshing with us. As fast and insane as their music was, the band was rather hilarious, asking for a speed hook-up the whole time and instructing the audience that the last song was “couples only mosh”. Grindcore kids are just music nerds with really fucked up senses of humor.

Cave State played next and they were the best of traditional grind sounding bands up to that point. The singer had a bit of a different vocal tone than the rest, a stuffier one.

At this point, with all the time I had spent in Los Globos and seeing everything set up DIY, it felt like I was at a house party. Can you think of anything cooler than seeing Eyehategod in a house party? My anticipation was mounting.

Captain Howdy, formed by members of Crossed Out, performed next, signaling yet another shift in 1Fest’s intensity. This band was much louder and more insane than anything that came before them. They turned it up to 11.

Captain Howdy was the first band to make me truly lose myself in noise. Their music is enjoyable and grueling to get through at the same time. I could imagine how someone who wasn’t into metal would experience a band this gnarly. It wouldn’t be pretty. I felt like I was wet with their noise long after 1Fest had finished and imagined their music never really leaving me but instead metabolizing in my spine. I didn’t think it could get any more insane than Captain Howdy… then fuckin’ Scapegoat played… Jesus. Their bass guitar is bow-down-and-worship worthy and makes for a groovy, power violence experience that won’t let you stand still. The singer brings so much intensity and passion to his craft that I’m surprised they aren’t a bigger phenomenon. The fact that a band of any genre can do what Scapegoat does and still not be famous for it, baffles me. They held us in the palm of their hand and once they finished their twenty-minute set, it was the first band that everyone simultaneously thought:

The moment I got to see Mike fucking Williams, Mike IX, return to his rightful place as the singer of Eyehategod. Mike had a liver transplant earlier in the year that nearly killed the poor bastard. The entire metal community was worried for his health. Randy Blythe had taken his place singing with the band on a tour with Discharge and Toxic Holocaust that I attended at the Roxy. They were great but it just wasn’t the same.

The moment Mike IX stepped on stage he was hailed with enthusiastic greetings and cheers. Never has there been such a savage voice contained in such a small package. Short and pencil-thin, you would expect the pain in his voice but not the command. It’s rare to see such a beloved singer in metal. Then Jimmy Bower plugged in and started feeding back his guitar to send the audience in a frenzy waiting for the first hellacious note to be played.

Pepper Keenan was the originator of the New Orleans metal guitar tone in bands like Graveyard Rodeo and Corrosion of Conformity but it was Jimmy Bower that single-handedly redefined it into the New Orleans sound you know today. It’s metal where you can hear the heroin. The anticipation grew with every moment of feedback until the drums kicked in and the band began to jam the fuck out. We went crazy, moshing, launching into each other, having no care for our bodies that we may offer them up to Mike IX.

Eyehategod has enough groove that I saw bubblegum pop loving girls in the audience shaking their asses to the infectious music. The played numerous hits like “Sister Fucker (1 and II)”, “$30 Bag”, and “Parish Motel Sickness”.

Next year Eyehategod celebrates their 30th anniversary and judging by the set they played at 1Fest: Los Angeles, they have many more years ahead of them. Long live EHG and Mike IX Williams and to 1Fest… you’re very disturbed individuals.  Thank you.